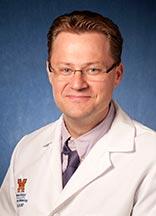 Dr Fort is a trained neuroscientist focusing on the neuroretina and the neuro-glial interaction. Dr Fort did his undergraduate studies at the Claude Bernard University in Lyon (France) before a master’s degree in neuroscience and a Doctorate in Living Sciences from the Louis Pasteur University in Strasbourg (France) with Dr Alvaro Rendon and Pr Jose Sahel at the Vision Institute in Paris (France). During his Ph.D., he uncovered unknown key roles of one of the dystrophin isoforms called Dp71, one as a key player in the regulation of retinal homeostasis by Müller glial cells, and the other as a critical protein for maintenance of lens transparency.

Following his Ph.D., Dr Fort pursued is training at the Penn State University (Hershey, PA) where he continued to gain knowledge of retinal physiology and how it is affected by metabolic and neurodegenerative diseases. As he joined the laboratory of Dr. Gardner for his postdoctoral fellowship, he started studying how diabetes affects retinal metabolism and specifically, protein synthesis. This led to the identification of novel mechanisms of regulation of protein synthesis, specific to the retina and different from other insulin-sensitive tissues. During this time, he also identified previously unknown proteome changes, including effects on intrinsic protective mechanisms critical for cellular survival, using proteomic-based discovery approaches. Dr Fort was recruited by the University of Michigan Kellogg Eye Center in December 2010 as an assistant professor of the department of Ophthalmology and Visual Science, where he focuses on the function and regulation of these intrinsic protective mechanisms in acute and chronic retinal neurodegenerative disorders. Dr. Fort later joined the program of Cellular and Molecular Biology (CMB) as well as the department of molecular and Integrative Physiology (MIP) and the Neuroscience graduate program (NGP) of the University of Michigan in which he participates in recruitment and training of graduate students.

Identifying and understanding mechanisms of retinal cell death that occur in neurodegenerative disorders such as diabetes.

Our research focuses on studying retinal diseases and their mechanisms, in order to develop new treatments to prevent or reverse associated vision loss. 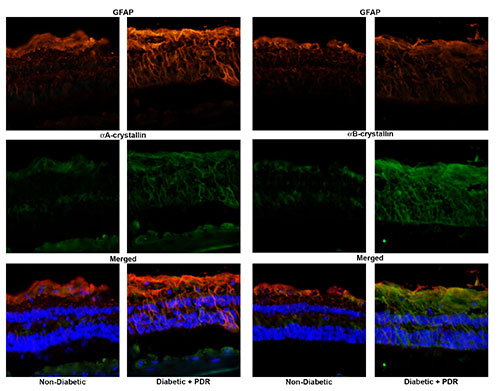 A major focus in our lab is the development of strategies to treat retinal neurodegenerations, including diabetic retinopathy. One of our objectives is to investigate the function and regulation of crystallin proteins in the adaptive responses of retinal cells during chronic disease states such as diabetes. Using whole proteome analysis, we have demonstrated that the expression of retinal crystallin proteins undergoes dramatic alteration. Studies in animal models and in humans have shown that diabetic retinopathy is a complex disease characterized by vascular alterations, inflammation, and neuronal cell death, processes which involve crystallin proteins. We have also demonstrated that alpha-crystallins, a subset of crystallin proteins, have intrinsic neuroprotective properties in retinal neurons and that those properties are impaired during diabetes. We are currently developing different cellular and integrated approaches to determine the mechanisms and pathways responsible for the loss of neuroprotective function of crystallin.

It has been demonstrated that crystallins are expressed in the human eye; however, their expression and regulation in human diabetic retina has not been studied. Another one of our projects uses proteomic and immunohistochemical analysis to evaluate the impact of diabetes on the expression of retinal crystallins in humans. Our goal in this project is to confirm the potential of crystallins for developing novel therapies to prevent neurodegeneration under stress conditions.