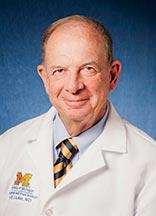 Dr. Lichter is Professor of Ophthalmology and Visual Sciences, Immediate Past Chair of the department and Founding Director of the University’s W.K. Kellogg Eye Center that opened in 1985. A recent 230,000 square foot addition to the Center opened in March, 2010. Dr. Lichter is a native of Detroit and received his undergraduate, medical school, and ophthalmology residency education at the University of Michigan, and a glaucoma fellowship at the University of California, San Francisco.

Dr. Lichter has to his credit over 200 publications including scientific articles, editorials, and book chapters and has delivered over 40 named lectures including the 50th Jackson Memorial Lecture. In 2008, he received the prestigious Howe Medal from the American Ophthalmological Society.

Newly diagnosed primary open-angle glaucoma is conventionally treated with medications. Only after this treatment fails is laser and/or incisional surgery performed. To test whether the conventional approach to glaucoma therapy was correct, the Collaborative Initial Glaucoma Treatment Study, for which Dr. Lichter was Study Chairman, was undertaken. It was a randomized, controlled clinical trial to determine whether patients are best managed by a medical approach first or by immediate filtration surgery. There were 14 clinical centers around the country through which outcomes of these two initial therapies were compared. The study was supported by the National Eye Institute.

Although the primary outcome variable was visual function, intraocular pressure differences between the two treatments were also evaluated. The final variable measured was quality of life. Because there can be significant side effects from the various treatments for glaucoma, CIGTS provided definitive data on specific quality of life issues for patients and their ophthalmologists as they share the decision of which treatment option is most suitable to the individual patient. A genetics component of CIGTS became part of the NEIGHBOR Consortium sponsored by the National Eye Institute to thoroughly investigate the genetics of glaucoma. Numerous mutations have been identified as linked to open-angle glaucoma. Also under NEI sponsorship, CIGTS data continue to be analyzed to add significant outcome information. For example, in a sub-analysis, it was determined that patients with more advanced glaucoma damage at the time of initial diagnosis seem to fair better with initial surgical treatment than by initial treatment with medications.  In those patients with low levels of glaucoma damage at the time of diagnosis, the outcome of glaucoma damage was no different whether using initial treatment with medications or with surgery.