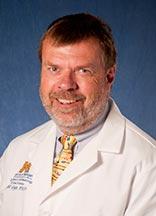 Dr. Gage studies the key regulatory networks and associated genes required for normal eye development and function. As the eye develops from undifferentiated precursor or stem cell populations, it requires the coordinated effects of these regulatory networks, including the actions of transcription factors and cell signaling pathways. If genetic or environmental factors disrupt the networks during development, the result can be congenital defects, cancer or other disease states. Researchers in Dr. Gage's laboratory are using a combination of gene targeted and spontaneous mutant mouse models, transgenic mice and functional genomics to identify and understand the regulatory networks that foster normal eye development. Design of effective stem cell therapies will require a detailed understanding of normal eye development. Therefore, these experiments are likely to provide important insights that will aid in designing effective new treatments of both congenital and acquired eye diseases.

Dr. Gage has identified the homeodomain transcription factor PITX2 as a key regulator at many stages of eye development. Heterozygous mutations in human PITX2 result in Axenfeld-Rieger Syndrome, which includes anterior segment defects in the eye and glaucoma. He has used gene targeting and Cre-loxP technologies to generate mice with null, hypomorphic (reduced function) and conditional alleles of PITX2. Analysis of the null and hypomorphic alleles established that PITX2 is required initially for patterning the periocular mesenchyme and subsequently for differentiation of the entire anterior segment of the eye, specification of extraocular muscles and maturation of the optic nerve. He has also demonstrated that PITX2 is required for normal development in the brain, pituitary gland, heart and ventral body wall.