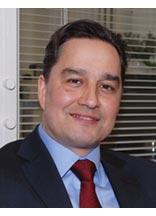 The main focus of my research is the development of gene and stem cell therapy with the primary aim of developing novel treatments for eye disease. Over the past two decades I have developed a comprehensive research program to investigate new therapies, with a focus on disorders affecting the retina, including inherited retinal degeneration as well as diseases associated with retinal and choroidal neovascularisation and posterior uveitis. This research uses a wide variety of genetic and experimental animal models of retinal disorders to evaluate and validate novel therapeutic approaches.

I am now working at the Kellogg Eye Center to build a major new program of translational research with the aim of developing effective new treatments for retinal disorders.  The program includes both pre-clinical studies in animal models, through to initiating clinical trials.

One of the main aims of my research is to develop gene therapies for patients with inherited eye diseases. My group has long been at the forefront of developing gene therapy for eye disease. We were the first to demonstrate efficient gene delivery to cells of the retina using a variety of vector systems  (Ali et al. Human Molecular Genetics, 1996; Yanez et al. Nature Medicine, 2006) and the first to demonstrate the potential of gene therapy in a mouse model of retinal dystrophy (Ali et al. Nature Genetics, 2000). We were also the first to conduct a clinical trial of gene therapy for retinal dystrophy (Bainbridge et al. New England Journal of Medicine, 2008; Bainbridge et al. New England Journal of Medicine, 2015). During that trial we showed that our gene therapy was safe, and we were encouraged to see that most of our patients saw improvements in vision, suggesting that gene therapy has real promise for treating retinal disease.

At the Kellogg Eye Center, I am building a program of translational research to treat a variety of inherited retinal disorders. The initial focus will be on several mutations that result in Leber congenital amaurosis (LCA) and other severe early-onset retinal disorders that cause blindness in the first few decades of life. In collaboration with other investigators at the Kellogg Eye Center, including Dr. Debra Thompson and Dr. John Heckenlively, I am developing gene therapy programs to investigate treatments for retinal diseases such as LCA caused by mutations in RPE65 and RDH12, achromatopsia caused by mutations in CNGB3, and X-linked retinitis pigmentosa caused by mutations in RPGR. Clinical trials to test therapies for RPE65, CNGB3, and RPGR associated disease will be initiated at the Kellogg Eye Center in the near future. I am also working with Dr. Thomas Gardner, Dr. David Antonetti, Dr. Steven Abcouwer, Dr. Patrice Fort, and others to investigate the potential of gene therapy-based treatment for complex disorders such as diabetic retinopathy.

Gene therapy will be most effective when a patient’s disease has not progressed to the point where there has been extensive degeneration and loss of retinal cells. In order to treat disease that has progressed to the point where retinal cells have already degenerated, we are also developing stem cell-based therapies with the aim of restoring lost sight by replacing the missing cells.  My group provided the first proof-of-concept for photoreceptor transplantation (MacLaren et al. Nature, 2006) and demonstrated that photoreceptor transplantation can improve vision in a mouse model of visual dysfunction (Pearson et al. Nature, 2012). My group is also pioneering the development of efficient methods to generate photoreceptors for transplantation from embryonic stem cells (Gonzalez-Cordero et al. Nature Biotechnology, 2013). Stem cell-based therapies offer promise for treating disorders such as Stargardt disease and age-related macular degeneration, and I am collaborating with Dr. Rajesh Rao and others at the Kellogg Eye Center to develop clinical trials of stem cell-derived photoreceptor transplantation.