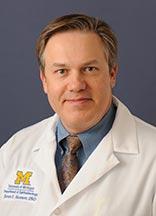 Dr. Abcouwer’s experience provides a broad knowledge of mathematics, physics, chemistry, biochemistry, biology, and physiology. Dr. Abcouwer was trained as a Chemical Engineer, earning both B.S. (University of Missouri-Columbia, magna cum laude with honors) and Ph.D. (University of Houston) degrees in ChemE, and specializing in Biochemical Engineering and Biotechnology. While enjoying the application of chemistry and classical physics that is chemical engineering, he became increasingly interested in the study of biochemisty, cellular and molecular biology and physiology. He completed thesis work on human cell immortalization with viral oncogenes, cell line development, and therapeutic protein expression. He did postdoctoral training (Monsanto Heath Sciences) in tumor biology studying therapeutic intervention of cancer cell adhesion and motility, as well as tumor invasion and metastasis using nude and SCID mouse xenographic tumor models.

As a junior faculty member at the Massachusetts General Hospital and Harvard Medical School he studied cell metabolism and energetics, focusing on glutamine metabolism, regulation of glutamine synthetase and glutaminase expression in both catabolic disease and cancer models. As a faculty member in the Department of Biochemistry and Molecular Biology at the University of New Mexico, Dr. Abcouwer studied cellular stress responses as they related to nutritional deprivation and endoplasmic reticulum stress, and discovered the role of ATF4 in vascular endothelial growth factor transcriptional response to cellular stresses. In New Mexico he taught biochemistry and nutrient metabolism to medical students for four years. At Penn State University Hershey Medical Center, Dr. Abcouwer was part of a team that conceptualized, designed and implemented a combined core course curriculum in the Biomedical Sciences Graduate Program at PSU College of Medicine. He developed and directed one of three core graduate courses that encompassed biochemistry, signal transduction and pharmacology. Dr. Abcouwer taught more than a quarter of the lectures in that course, including: the TCA cycle, mitochondrial function, electron transport chain, cell death mechanisms, inflammatory cell signaling, mechanisms of drug action, and drug discovery. He also lectured in the Graduate Physiology Program on pancreatic hormones, diabetes and energy metabolism; and taught in the Graduate Microbiology and Immunology Program on the application of adenoviral vectors. Dr. Abcouwer consistently earned top student teacher evaluations and was nominated for “Best Overall Teacher in the Graduate Program” by the PSU Hershey Graduate Students in 2009, as well as for “Most Challenging Teacher in the Graduate Program” and "Most Inspiring Teacher in the Graduate Program” in 2010. Dr. Abcouwer served on several active educational committees, including the committee to restructure the Biomedical Science Graduate Program core curriculum, the committee to restructure the entire Biomedical Science Graduate Program, and the Medical Curriculum Evaluation Committee (CEC). He was a member on one of the institution’s strategic leadership teams, the Academic Team. He also served as Project Manager for a major education research granting endowment, the Woodward Endowment for Medical Science Education, which competitively funds medical education training and innovative projects in medical science education research at the Penn State Hershey Medical Center.

Dr. Abcouwer served as Associate Editor and Editorial Board Member of the journal Nutrition. He currently serves on the American Diabetes Association Research Grant Review Panel and on the Editorial Board of American Journal of Physiology: Endocrinology & Metabolism.

Dr. Abcouwer's research is aimed at understanding various mechanisms/processes that contribute to the development of diabetic retinopathy, including neural degeneration, vascular dysfunction, and the function and activation of immune cells. He serves on the Juvenile Diabetes Research Foundation Diabetic Retinopathy Center leadership team. He is Co-Principal Investigator of the Preclinical Interventions Study (Project 2) of the Center along with Dr. David Antonetti. Together, they are examining the potential of various FDA-approved drugs to inhibit neurodegeneration and vascular dysfunction caused by retinal ischemia-reperfusion injury (IR), as well as diabetic retinopathy. Their research team has developed an innovative and efficient process of pre-screening in the IR model to identify treatments to be further tested in diabetic animals. IR serves as a useful tool to acutely model retinal neurodegeneration, as well as the vascular endothelial growth factor- (VEGF) dependent retinal vascular permeability. Having identified several promising drugs, they are now focusing on the mechanisms by which limited classes of drugs provide neuroprotection and/or alleviate the vascular permeability response to IR.

With an R01 grant from the NEI, Dr. Thomas Gardner and Dr. Abcouwer are examining the mechanisms by which retinal neurons degenerate during diabetic retinopathy. This work focuses on the interaction of inflammatory and neurotrophic influences in the diabetic retina. It is based on the observations that cytokines and hyperglycemic conditions become toxic to retinal neurons only in the absence of neurotrophic stimulation. Thus, the objective is to understand the crosstalk between apoptotic signaling pathways caused by hyperglycemia and inflammation with protective neurotrophic signaling pathways. Dr. Abcouwer is examining the interaction between the glucose-responsive thioredoxin-interacting protein (Txnip) and its downstream effecter, apoptosis-signal-regulating kinase (ASK) with the anti-apoptotic PI3K/AKT pathway. The work will further our understanding of how these pathways interact to influence mitochondrial function, reactive-oxygen species generation, the mitochondrial apoptotic pathway, as well as pro- and anti-apoptotic gene expression.

Dr. Abcouwer’s lab is also examining the function and reactions of retinal microglia. These cells represent the innate immune system of all neuronal tissues. They act to monitor the health and function of neurons, detect infection and tissue damage, and maintain homeostasis of neuronal tissue. These cells were once viewed as culprits in neurodegenerative diseases, based on their ability to become fully activated and to produce numerous inflammatory cytokines and destructive reactive oxygen species, thus causing neuronal death and vascular dysfunction. However, it now appears that microglia adopt alternative and anti-inflammatory states of activation that may serve to phagocytose and eliminate damaged tissue as well as limiting and preventing systemic inflammatory reactions to neuronal damage. Very little is known of the states of microglial activation during retinal pathologies; most current studies are limited to describing the migration and morphology of these cells during pathological states. Dr. Abcouwer’s goal is to characterize the various activation states adopted by retinal microglia in diabetic retinopathy and other, more acute retinal pathologies. To this end, his team is developing methods of retinal microglia isolation and flow cytometric analysis to study these cells in detail, as well as methods to manipulate the number and function of these cells in the retina. Their aim is to test the hypothesis that these cells adopt an alternative activation state and thus serve a beneficial role during early diabetic retinopathy, subsequently adopting an inflammatory activated state and playing a detrimental role as the disease progresses and decompensation sets in. Additional studies have perfected methods for maintaining retinal microglia in primary culture and have developed a unique microglial cell line exhibiting temperature-dependent growth and differentiation. These methods will be used to study the interactions of microglia with retinal neurons and vascular cells, the alternative states of microglial activation, and means to prevent these cells from adopting destructive inflammatory activation states.

View a list of publications on Michigan Research Experts.