Tracheomalacia in babies occurs when cartilage in the trachea, or windpipe, develops abnormally.  As a result, the tracheal walls can collapse, making it difficult to breathe.

Tracheomalacia cases vary in severity. For most children, symptoms are mild and subsist by age three, once the tracheal cartilage has had time to grow stronger. But for approximately 5,000 babies in the United States, symptoms are life-threatening and require a tracheotomy and ventilator. Although these babies are often able to have the tracheotomy ventilator removed by age three, the medical costs and impact on quality of life are significant. 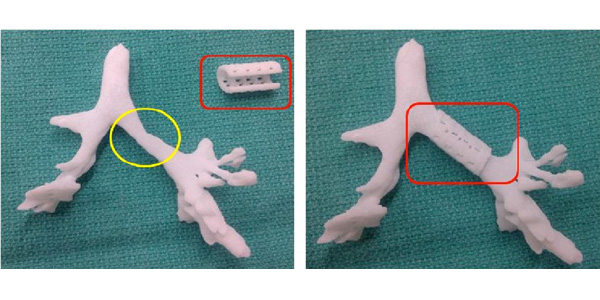 Researchers in our department are investigating a treatment for severe cases of tracheomalacia. Dr. Glenn Green, pediatric otolaryngologist, and Dr. Scott Hollister, professor of biomedical engineering, have developed a biodegradable scaffolding, which can be designed and manufactured into a tracheal splint using patient imaging, computer aided design based on the patients image, and a laser-based 3D printing system. This splint is attached to the outer side of the trachea, holding the airway open and preventing collapse associated with tracheomalacia.

The tracheal splint is still in the research phase and therefore not available for clinical use. But in February 2012, a life or death situation put the splint to the test. Three-month-old Kaiba of Dayton, Ohio was rushed to a local hospital after suffering a respiratory arrest at home. Diagnosed with a severe case of tracheomalacia, Kaiba received a tracheotomy and ventilator and required heavy sedation in the hospital. Despite these efforts, he continued to require resuscitation. Knowing there was nothing else they could do for him, Kaiba’s healthcare providers referred him to the capable and experienced hands of Dr. Green. 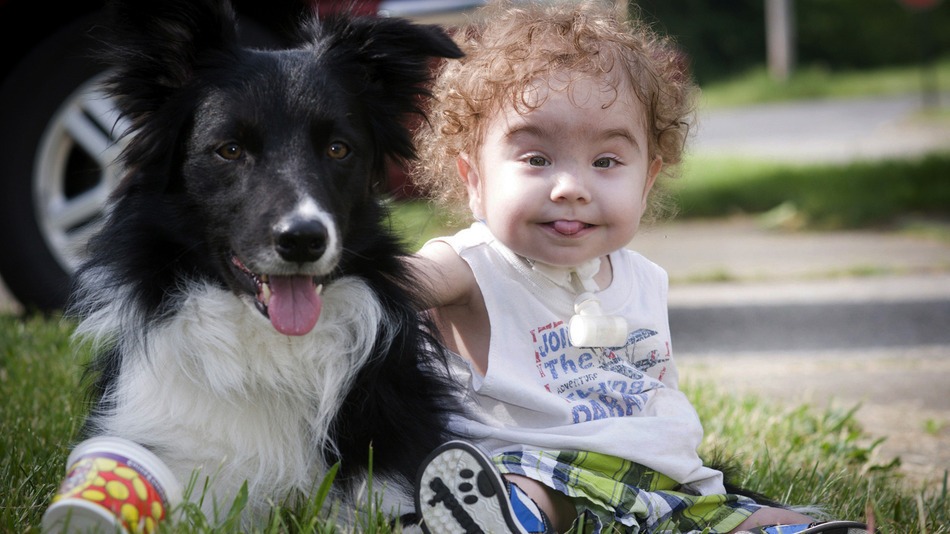 Dr. Green was faced with an important decision: attain emergency approval to use the biodegradable scaffolding or inform Kaiba’s parents that their baby boy would die. The answer was simple, and soon Dr. Green was working with the Federal Drug Administration, Institutional Review Board and hospital administration to secure permission. One week later, Dr. Green received approval to use the biodegradable tracheal splint, making Kaiba the first baby on earth to receive this treatment. Today, Kaiba is thriving. He is well on his way to living a normal childhood, one that would not have existed without the important work of Drs. Green and Hollister and this innovative technology.

Hollister and Green again used provisions for emergency clearance from the FDA to create and implant a tracheal splint for Garrett. Hollister created a 3D model of Garrett’s airway and specially designed splints for a custom fit on the baby’s bronchi. He was then was able to make the custom-designed, custom-fabricated splint using high-resolution imaging and computer-aided design. The device was created directly from a CT scan of Garrett's trachea and bronchi, integrating an image-based computer model with laser-based 3D printing to produce the splint. 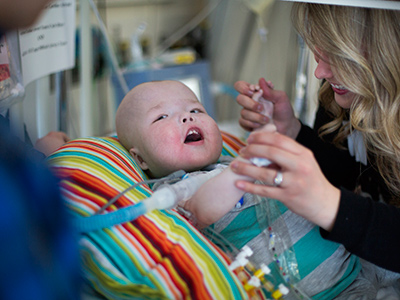 Then in January 2014, Drs. Green and Hollister again had the opportunity to use their new device. Garrett has a condition called tetralogy of Fallot with absent pulmonary valve, which can put tremendous pressure on the airways. In Garrett’s case, he developed severe tracheobronchomalacia. Richard G. Ohye, M.D., the head of pediatric cardiovascular surgery at C.S. Mott, took on the intricate task of sewing two devices on two spots of Garrett’s airway, assisted by Green. The splints were sewn around Garrett’s right and left bronchi to expand the airways and give it external support to aid proper growth. Hollister says it is hoped that Garrett will need about two to three years for his trachea to remodel and grow into a healthy state. That’s about how long this material will take to dissolve into the body.

“Severe tracheobronchomalacia has been a condition that has frustrated me for years,” says Green. “I’ve seen children die from it. To see this device work, for a second time, it’s a major accomplishment and offers hope for these children.”

It is thrilling to have a treatment to offer children like Kaiba and Garrett, but the splint cannot be made available on a wider scale until research is complete. That research comes at a great cost. If you would like to donate to this cause, please click on the button below.