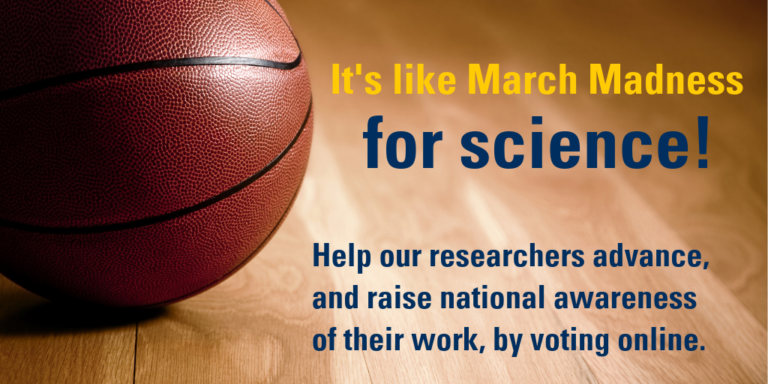 You’ve heard of March Madness for basketball — that’s happening later this month. But starting today, you can support two U-M research teams in another kind of tournament.

Two Michigan Medicine teams were picked to compete, based on important research they published last year. You can vote for them, and your favorite teams in 30 other match-ups of research from around the country, by clicking here.

More about the Michigan Medicine teams:

One team, based in otolaryngology and biomedical engineering, developed a promising technique to treat tinnitus. That’s the condition that causes annoying, or even disabling, phantom noises in the ears.

Led by Susan Shore, Ph.D. of the Kresge Hearing Research Institute, they were chosen for their paper in Science Translational Medicine reporting research results from treating animals and humans.

Since the paper came out, they have enrolled dozens more people in a clinical trial of the device they created after years of basic research into the causes of tinnitus. They’re seeking to commercialize the device, and they’ll compete under the Michigan Medicine name. Read more about this work on the Michigan Health Lab site.

After you’ve voted, sign up to receive updates when each new round of voting begins. The field of competitors will narrow week by week until the final two teams are standing — right at the end of basketball’s March Madness.