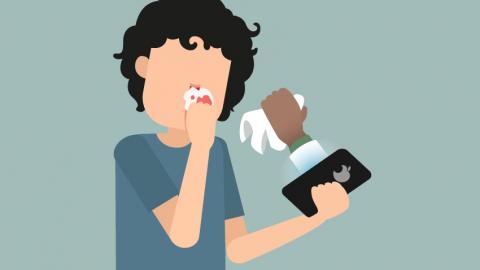 Help for a rare genetic blood vessel disorder that can attack the nose, brain and lungs is available at the touch of a finger.

A new free app, My HHT Tracker, helps patients with hereditary hemorrhagic telangiectasia (HHT), or Osler-Weber-Rendu syndrome, a little-known genetic disorder in which blood vessels develop improperly and are prone to bleeding, especially from the nose.

The disease is not typically life-threatening if the patient knows about the disorder and the symptoms are managed, monitored and treated by an HHT expert.

Cue the app. University of Michigan’s Jeffrey Terrell, M.D., a professor of otolaryngology (also known as ENT, for ear, nose and throat) and associate chief medical information officer, and U-M medical student Seth Klapman conceived of the app as a way for patients to better manage their symptoms.

Cure HHT, a Maryland-based advocacy group dedicated to finding a cure for the blood disorder, funded the project and worked with Arbormoon Software Inc. in Ann Arbor, Michigan, to build and launch the app in the Apple App Store.

The app logs a patient’s HHT health data, such as blood counts and oxygen levels, organizes medical tests and results, shares data with a health care team, monitors how a patient is feeling, tracks nosebleeds (both in severity and frequency) and produces charts that show the effectiveness of treatments.

It also will remind users to record any nosebleeds that occurred that day in the Bleed Journal or to make appointments for annual tests to keep HHT symptoms from creating bigger problems such as aneurysms or strokes.

Awareness is key. The average diagnosis delay is 27 years, according to Cure HHT. It affects 1 in 5,000 people worldwide, but because 90 percent of people with HHT are undiagnosed, that figure may be closer to 1 in 3,000, it says.

And despite it being as common as cystic fibrosis, the disorder is not well known, even in emergency rooms. Terrell knows doctors who say HHT received one sentence in their medical textbooks.

Treatment can be as simple as humidification and lubrication, using saline and Vaseline to increase nasal moisture, Terrell says. He is often the first HHT expert patients see at Michigan Medicine because of his 20-year experience treating the disorder.

But some patients experience daily nosebleeds or lose so much blood that they develop anemia or require transfusions.

One of Terrell’s favorite components of the app is the educational section of the FAQ. It offers in-depth information about the nuances of the condition and guidance on how to manage it.

Users learn, for instance, the root of the excessive bleeding. Patients with HHT typically have two types of blood vessel abnormalities. The smaller ones can be seen in the skin, appearing as red or purple dots the size of a pinhead. They are called telangiectasia and are found on the hands, face, mouth, lips or inside the nose. The larger blood vessel abnormalities, arteriovenous malformations (AVMs), hide elsewhere in the body but favor the nose, lungs, gastrointestinal tract, brain and liver. Complications from nosebleeds and AVMs can be life-altering or life-threatening for patients, but awareness and treatment greatly reduce those risks.

Receiving help outside of an appointment

My HHT Tracker allows Terrell to nearly clone himself, he says. He has recorded YouTube videos to help people understand the app and how managing the symptoms results in better outcomes.

“I love teaching patients, but during an office appointment I can only teach one person at a time,” he says. “We need to get information about HHT out there to educate more people, and this app is one way to do that.”

When the app launched in October, nearly 400 people downloaded it in the first three weeks, he says.

While the initial release is only available on the iOS platform, Terrell and Cure HHT are exploring an Android version.

“The app is a nice solution that helps patients feel in control of their HHT,” Terrell says. 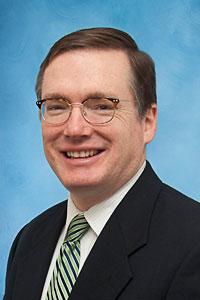