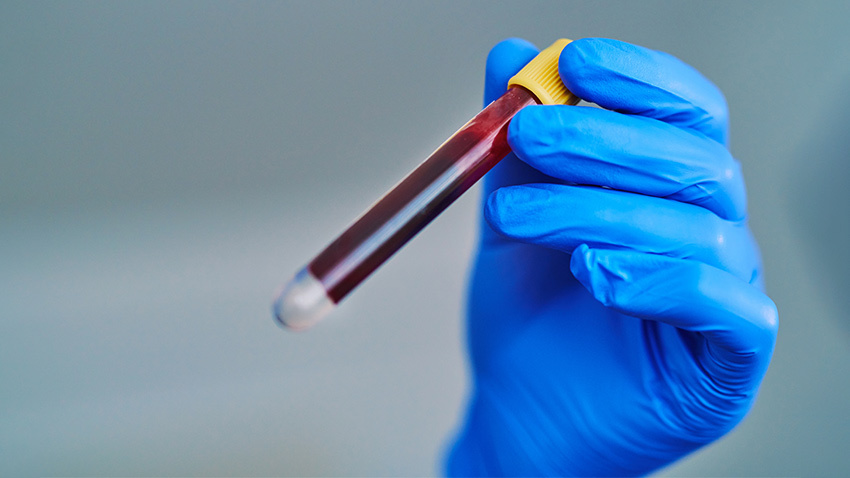 A sensitive blood test being developed by a team of researchers at the University of Michigan Rogel Cancer Center shows promise for predicting whether patients with metastatic HPV-positive throat cancer will respond to treatment months earlier than standard imaging scans.

That’s according to a study, published in Oncotarget, validating the test in a small group of patients with metastatic human papillomavirus-related oropharyngeal squamous cell carcinoma — a type of head and neck cancer that develops in the back of the mouth and in the throat.

If the test can quickly determine that a treatment approach isn’t helping, it could allow doctors to seek out alternative therapies or clinical trials in a more timely manner. It could also potentially spare some patients months of toxic side effects from a treatment that isn’t working.

“Currently, the only way doctors know if a treatment is working is for the patient to get an imaging scan every few months to see whether their tumors are shrinking,” said oncologist Paul Swiecicki, M.D., one of the study’s senior authors. “And this isn’t fully accurate since some cancers show what we call pseudoprogression, where a successful treatment actually makes the tumors bigger before it shrinks them.

“Our goal was to develop a test that could tell us whether a treatment is likely to work after a single cycle,” he continued.

The research comes amid a rising incidence of throat cancer caused by human papillomavirus infections, which are often spread through sexual activity. Once the cancer has recurred or spread within the body, patients typically only live for about one year. Furthermore, most of the available treatments, such as immunotherapy, work for less than 20% of patients and can have significant side effects.

The test is a form of “liquid biopsy” that looks for DNA shed by a patient’s cancer cells into their bloodstream using a method known as digital droplet PCR, which can amplify minute amounts of DNA for analysis.

“We can actually identify DNA from a small tumor at the back of the throat circulating throughout the entire bloodstream,” Haring said.

"From a single tube of blood, this technology can isolate a single copy of tumor DNA,” Bhambhani added. “And quantifying the number of copies can tell us whether a patient’s cancer is responding to treatment.”

The study analyzed more than 100 samples taken over nearly two years from 16 patients with advanced cancer that was positive for HPV 16, one of the most common, high-risk types of HPV infection. Seven of the patients were treated with immunotherapy regimens. Eleven patients underwent treatment that included chemotherapy.

The researchers found that increasing levels of HPV-positive circulating tumor DNA after a course of treatment were a strong indicator that the cancer was not responding to the treatment. And that the tumor DNA could be detected months ahead of tumor growth that can be measured on imaging scans.

Swiecicki points to one of the patients in the study as an example.

The patient underwent chemotherapy treatment for about 200 days. Their HPV 16-positive circulating tumor DNA fell to nearly zero for the first 100 days and imaging scans showed the disease had stabilized. But copies of the HPV 16 DNA started to multiply in their blood between day 100 and day 200, when the disease progression was ultimately detected on imaging scans.

“In the future, the idea is that the test would give us a window of time — about 100 days in this example — to find alternative therapies or a clinical trial,” Swiecicki said. “And this particular patient did have significant toxicities from the therapy, some of which potentially could have been avoided once it became clear the cancer was no longer responding to the treatment.”

Senior study author Chad Brenner, Ph.D., an associate professor in the Department of Otolaryngology-Head and Neck Surgery, notes that scientists around the world have been working to develop similar tests. The success at U-M was the result of collaboration that involved clinicians as well as researchers with expertise in next-generation sequencing and in the genetics of head and neck cancer.

“Everybody talks about team science,” added Tewari, a professor of internal medicine and of biomedical engineering, “but everybody involved in this effort contributed a unique piece. And U-M is a place that really embraces this spirit of interdisciplinary collaboration.”

The blood test may also be useful for early detection of recurrence before the cancer is incurable. According to additional findings the research team recently described in the journal Oral Oncology, HPV circulating tumor DNA is in the blood of patients with early stage throat cancer. Retrospectively, the test was also able to identify recurrent disease in a patient more than a year before it was detected by with standard approaches.

Before treatment, the patient had significant levels of circulating tumor DNA in their blood, which dropped down to near zero in the months following treatment.

“We thought they were potentially cured,” Brenner said. “We couldn’t detect this biomarker at all.”

But after six months, the level of circulating tumor DNA in their blood started to rise — slowly at first and then more dramatically.

While work to further optimize and validate the test continues, the team is partnering with other academic medical institutions to use the test to study the relationship between HPV-positive circulating tumor DNA and clinical outcomes in additional patients.

Disclosure: The study team has filed an invention disclosure on the DNA assay and the University of Michigan has filed for patent protection on the assay technology.