Barbara carried an undiagnosed voice disorder with her for almost forty years before she sought the expertise of medical professionals at the U-M Vocal Health Center.

Barbara Ferris gets choked up when asked about her journey to the University of Michigan Vocal Health Center.

“For years, many years, I avoided people and situations that would force me to speak or get emotional. I wouldn’t have been able to do this interview without losing my voice.”“I know I’m going to cry….” Barbara said, her voice trailing off. “I’ll try my best to put what I feel into words.” 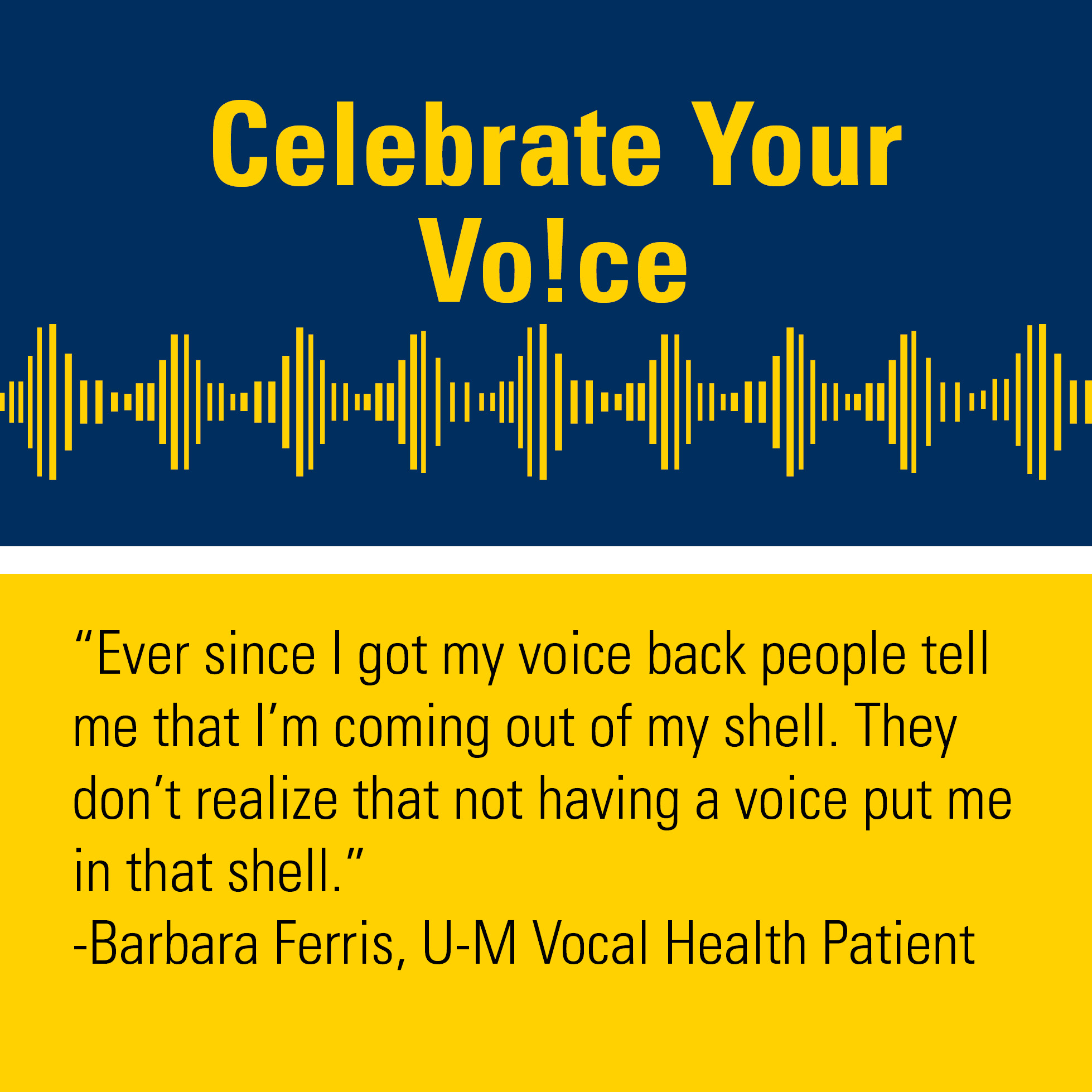 Barbara carried her undiagnosed voice disorder with her from physician to physician. A breast cancer survivor, Barbara brought her symptoms to the attention of her oncologist, who recommended she go to the University of Michigan. “Going to the University of Michigan was suggested to me several times in the past,” Barbara said. “I just assumed it would be too expensive. Plus I live three hours away, so it was going to be a time commitment as well.”For Barbara, it's been a long time since she spoke with this much ease. "By the end of every day my voice would be gone," Barbara said, "I worked a second shift factory job, and when it would get really hot, I felt as if I was suffocating." Barbara sought the advice of a local ENT when she visited the emergency room after an unusually hot day left her struggling to breathe, but they couldn't offer a clear explanation for her symptoms.my best to put what I feel into words.”

In April of last year, Barbara decided to heed the advice of her friends, family, and physicians and made an appointment with Norman Hogikyan, M.D., division chief of laryngology and general otolaryngology at the U-M Vocal Health Center. “I had a very long appointment with Dr. Hogikyan, and he was very puzzled when I told him about my symptoms,” Barbara recalled. She was referred to Dr. Hogikyan with a diagnosis that did not make sense to him once he talked with her.  When Dr. Hogikyan asked if she ever had a throat infection, Barbara relayed that over 40 years ago she had a mild infection that she assumed went away. “I could see a lightbulb go off in his head,” Barbara said. A detailed review of her medical history, along with a voice assessment and a thorough laryngeal examination led Dr. Hogikyan to a diagnosis of laryngeal candidiasis.  The condition is a yeast or fungus infection in the larynx that is difficult to recognize, but can usually be treated readily once diagnosed.  The diagnosis finally explained her voice symptoms, as well as her shortness of breath under certain conditions. After receiving a prescription for an antifungal medication, Barbara felt almost immediate relief from the symptoms she lived with for the past 40 years.

“It’s remarkable,” Barbara said. "Ever since I got my voice back people tell me that I'm coming out of my shell. What they don’t realize is not having a voice put me in that shell.”

Barbara acknowledges that her voice was re-discovered because of the expertise at the U-M Vocal Health Center, and believes that, even though the diagnosis took 40 years, everything happened the way it was supposed to. “I thank God for His perfect timing…I was meant to come to the University of Michigan when I did." While Barbara is thankful for Divine timing, she also advises patients in similar circumstances to make their health a top priority. "Don't wait and don't prolong your symptoms…you deserve the best care possible.”