For Mary Wimmer, early detection of a sinonasal carcinoma, diagnosis, and referral to a subspecialist by her ENT expedited her treatment and saved her life. 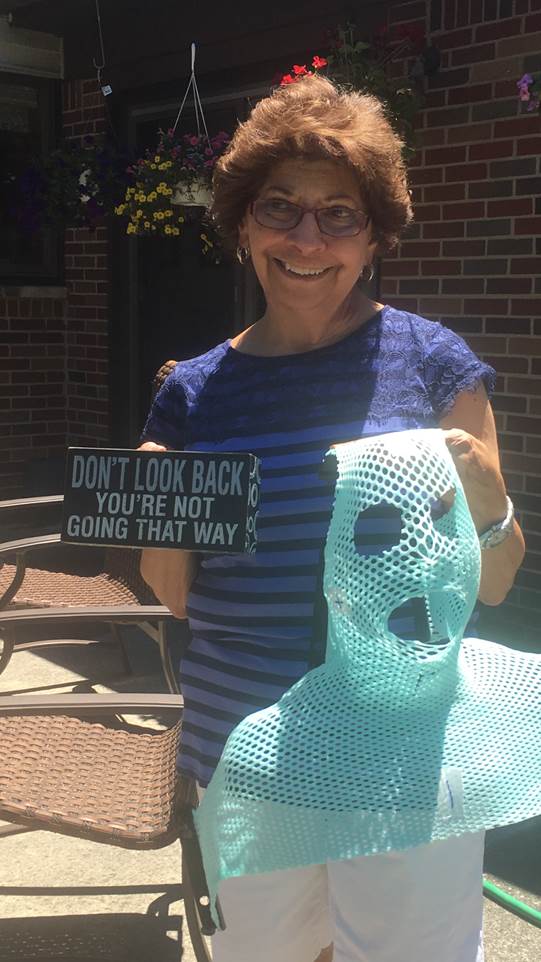 Mary “Cookie” Wimmer celebrated her 74th birthday with a couple of unconventional practices: burning her radiation mask, after completing radiation two days prior, and releasing six balloons to represent the six weeks of radiation treatments she underwent. “I woke up on my birthday and remembered that just a few months ago, I didn’t think I was going to make it to see this day,” Cookie says.

On April 1, 2016, Cookie found herself in a grim place: a doctor’s office receiving a dire diagnosis.  Cookie recalls hearing the diagnosis of a sinonasal undifferentiated carcinoma (SNUC), a rare cancer of the nasal cavity, on April Fool’s Day, “I remember thinking, and hoping, that it was all a joke.”

Cookie was in Florida when she noticed gradually worsening nasal obstruction. She saw a physician who found a mass on a CT scan. He suggested that she return to Michigan for a biopsy. “You think that these things won’t happen to you,” Cookie says, “but I just had a gut feeling.”

Upon returning to Michigan, Cookie was seen by her local otolaryngologist, U-M alum Daniel Rontal, M.D., who performed the biopsy.  The preliminary report had an unfavorable diagnosis: Cookie had a rare tumor of the paranasal sinuses characterized by aggressive growth and poor prognosis. Mary asked if she should consider seeking a second opinion outside of the state, but Dr. Rontal said he knew someone at the University of Michigan who could treat her. He called Erin L. McKean, M.D., MBA, chief of the Division of Rhinology and Skull Base Surgery in the Department of Otolaryngology-Head and Neck Surgery.

“Not 15 minutes after leaving Dr. Rontal’s office, my phone rang. It was the University of Michigan, and they were asking how soon I could get there,” recalled Cookie. “At that moment I felt a sense of divine intervention.”  Cookie recalls arriving at the U-M otolaryngology clinic that very day, where they had been expecting her arrival and took her right back to be seen by Dr. McKean. “Once I was seated, I was told by one of the nurses that this is where I was supposed to be and that I’ll be taken good care of,” Cookie recalls.  “I remember Dr. McKean examining me and saying, ‘We can treat this. You are going to be fine.’” At that moment, Cookie reiterates her belief in divine intervention and her gratitude for every member of her care team for being seen and treated expeditiously.

“For Cookie, her cancer was diagnosed very quickly by Dr. Rontal, and she was able to be seen right away in the skull base clinic,” Dr. McKean says. “This is what allowed her to have a minimally-invasive operation and avoid chemotherapy as a part of her treatment regimen.”

10 days after receiving her diagnosis, Cookie underwent an expanded endonasal approach for resection of the SNUC. In the past, an operation to resect such a tumor would include an open craniotomy and adjuvant chemotherapy and radiation.  “Given the early stage of her cancer, I recommended a minimally-invasive endoscopic endonasal approach with transnasal craniotomy and clearance of margins. We were able to get negative surgical margins, allowing her to avoid chemotherapy and get radiation treatment… an outsider wouldn’t be able to tell she had ‘brain surgery’ and cancer treatment,” Dr. McKean says.

Cookie is now nine months out from completion of all treatment. In spite of the challenging treatment plan, Cookie is thankful for the expertise that was readily available to her at the University of Michigan and advises patients in similar circumstances to seek a second opinion when faced with a frightening diagnosis. “Find the people with the necessary expertise,” says Cookie. She remains thankful for the time she has been given. “I came out from the other side, and I’m taking it one day at a time.”