The Voice I Hear

In the hallway of the U-M Vocal Health Center, there's a USA Today article from 2004 which featured Norman D. Hogikyan, M.D., division chief of laryngology and general otolaryngology at Michigan Medicine. The report highlighted a groundbreaking treatment for a voice disorder known as spasmodic dysphonia: Botox injections in the vocal cords. This new treatment was changing the voices and lives of those affected by the condition. 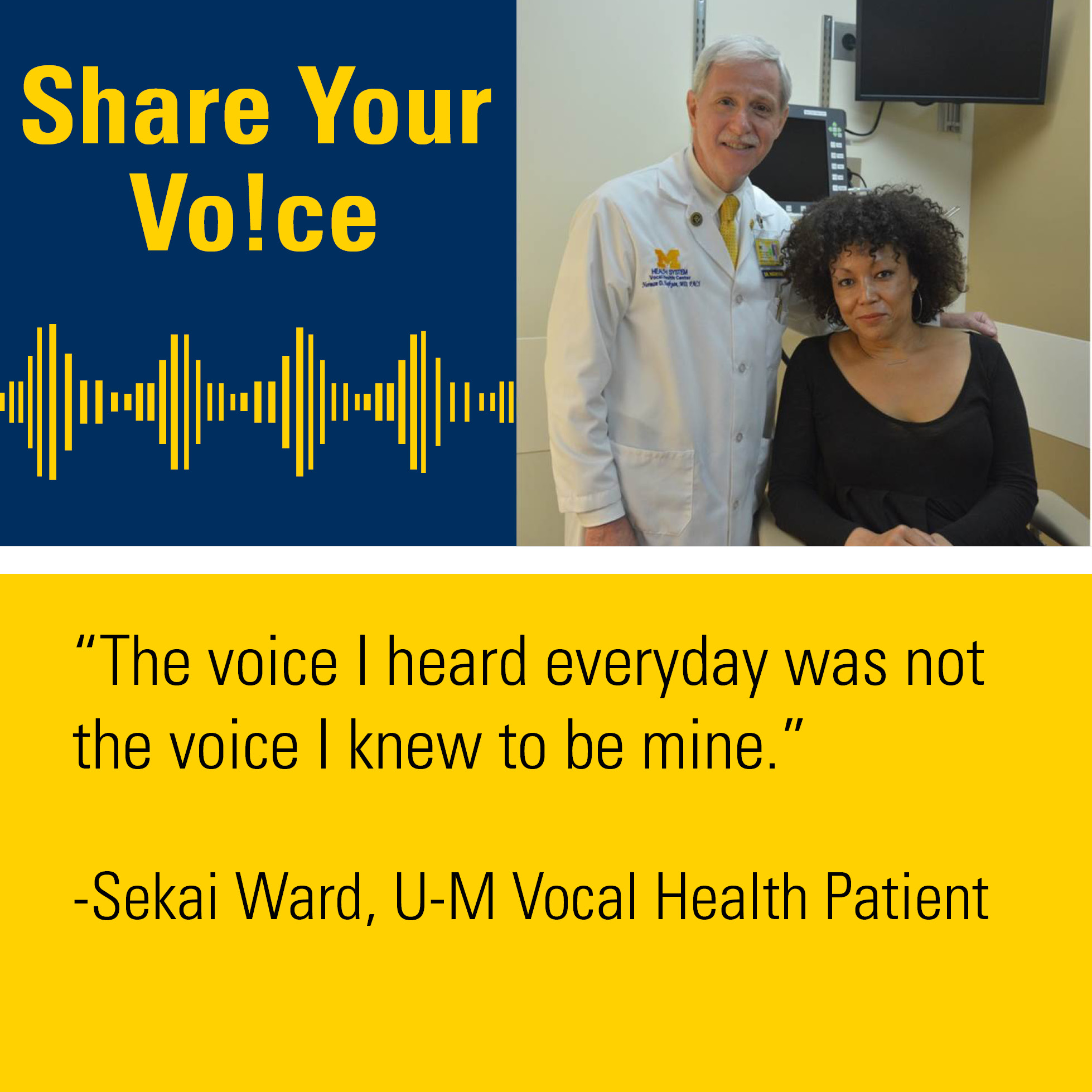 Spasmodic dysphonia causes muscles in the larynx to spasm involuntarily, leaving patients diagnosed with it struggling to speak without sounding strained, breathy or whispery. For U-M vocal health patient Sekai Ward, her condition, a laryngeal movement disorder like spasmodic dysphonia, meant isolation and increased depression. Tired of being asked if she was sick or a heavy smoker due to her raspy voice, Sekai became withdrawn. "I would avoid talking with people altogether," Sekai recalls. "I would purposely go to stores where I wouldn't know anyone who worked there so I wouldn't have to engage in conversations…I isolated myself a lot."

"My voice is a huge part of my identity," Sekai says. "The voice that I heard every day was not the voice I knew to be mine. I felt like I had lost a part of myself."

Over the next few years Sekai saw a geriatric neurologist to rule out early onset Parkinson’s, underwent screening for lesions on her vocal chords, attended regularly voice therapy sessions and tried numerous medications to alleviate symptoms without success.  “I was really discouraged and frustrated because everyone had a different opinion about what was wrong with me,” Sekai said. “I was afraid that I was going to lose my voice and my ability to communicate.” Bereft of an explanation for her worsening symptoms, Sekai was determined to find answers. After delving into innumerous hours of research, she happened upon information relating to Botox as a treatment for her symptoms. Botox, while currently best known for relaxing the muscles of furrowed foreheads, can also be used to relax the involuntary spasms of the muscles in the larynx. Willing to try anything, Sekai made an appointment with Dr. Hogikyan at the University of Michigan.

Following her vocal cord Botox injections, which Dr. Hogikyan performed using muscle monitoring technology known as electromyography provided by U-M audiologist Bruce Edwards, Au.D., Sekai again heard the voice she knew to be hers.  "This has been truly life-changing," Sekai says. “Not only has Dr. Hogikyan restored my voice, he helped me reclaim a crucial part of myself and I will always be grateful.”

Patients with a laryngeal movement disorder return periodically for these injections. "Through my patients, I have learned so much about what loss of voice means to them,” says Dr. Hogikyan. “It is extremely gratifying to be able to regain their voice, and in doing so, restore a part of their identity.

Thankful for the expertise that was readily available to her at Michigan Medicine, Sekai advises patients in similar circumstances to never give up trying to find their voice. "Don't give up and don't ignore your symptoms. Do your research. It took me almost four years to find my way here, and I was at a low point before I found what worked for me." Sekai also wants patients who are experiencing similar symptoms to know that they have to take care of themselves. "Self-care is essential," Sekai cautions. "Stress, lack of sleep and even not drinking enough water will take a toll on your voice."

With the continued help and care of Dr. Hogikyan and support groups through the National Spasmodic Dysphonia Association, Sekai has found a network of support to last a lifetime. "I've found support in other people's stories, and I hope someone can find hope from mine."