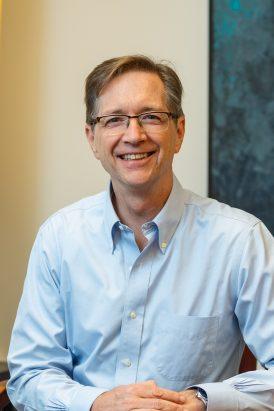 Robert Kennedy is the Willard Professor of Chemistry and Professor of Pharmacology at the University of Michigan. Professor Kennedy earned a B.S. in Chemistry at the University of Florida (1984) and a Ph.D. from the University of North Carolina (1988). He was a post-doctoral fellow at North Carolina from 1989-1991.  He became professor of chemistry at the University of Florida in 1991 and served there for 11 years before moving to Michigan.  He teaches undergraduate courses in analytical chemistry and a graduate course on Chemical Separations. His research interests are analytical chemistry and its application to neuroscience, endocrinology, and biotechnology.  His group has developed instrumentation that couples sampling probes to capillary electrophoresis, capillary chromatography, mass spectrometry, and microfluidic assays for monitoring neurotransmitters in vivo.  These methods have been used for studying changes in neurotransmitter concentrations associated with behavior and diseases.  His group has also developed sensors and microfluidic devices for monitoring insulin secretion from pancreatic b-cells.  These methods are coupled with metabolomics to understand the biochemical mechanism of insulin secretion and perturbations associated with diabetes.  His group is also researching use of rapid electrophoretic and mass spectrometric assays as novel approaches to high-throughput screening.  His work has been recognized by several awards including two MERIT awards from the NIH, a Presidential Faculty Fellowship, a Sloan Foundation Fellowship, Beckman Young Investigator Award, ACS Findeis Award, McKnight Award for Technical Innovations in Neuroscience, and Golay Award for Achievements in Chromatography. He has held several service posts and is presently Associate Editor of Analytical Chemistry and Director of the Microfluidics in Biomedical Sciences Training Program at Michigan.

Regulation of the secretion of neurotransmitters and hormones in both central nervous and endocrine systems.  We are also developing novel approaches to high-throughput drug screening.