It Happened to Me: I Needed a Social Worker and Then I Became One

I only cared about the mentally ill in theory, until I was institutionalized myself.

My first psychiatric commitment was involuntary. I was 25 years old and I had been juggling three jobs while balancing the act of college town hipsterdom. Ah, yes, the quarter-life crisis writ large. The nighttime amenities of Athens, Georgia were just too much of a responsibility for someone with poor self control, a taste for danger, and on the brink of a complete meltdown.

I stopped being able to sleep, lost all my jobs in a week, and my status updates became bizarre. Out of concern for my erratic behavior, my friends organized a search party and cornered me at the Go Bar. They called an ambulance, but I adamantly resisted services. The police were called and asked me what was going on. I rapidly explained to them, “It’s like that scene from Indiana Jones when his heart gets ripped out.”

The police accused me of being on drugs. I protested the allegations by smashing my beer bottle on the concrete. The police handcuffed me and placed me in the cop car. 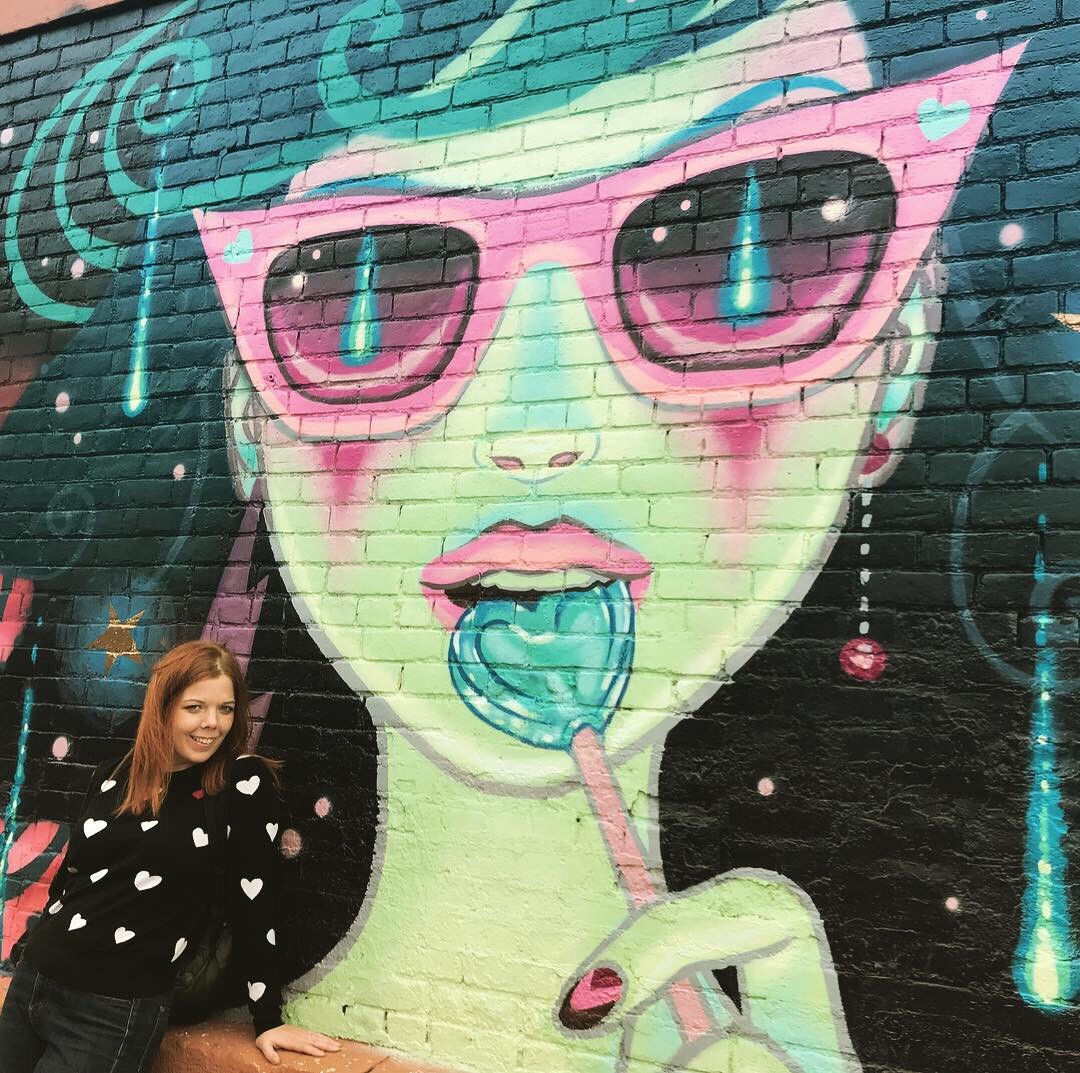 I can only too vividly imagine how the circumstances of my mental health crisis could have mortally escalated if I didn’t meet the criteria of a “harmless” little white girl. Interacting with police can be dangerous for people of color even without a mental illness, but when mental illness is added to the mix it can be even more likely to end in death. There are too many instances of police being poorly trained at intervening in mental health crises, and this lack of training resulting in the person in crisis being killed. Being poor, a minority, or disabled all increase the risk.

With me kicking and screaming in the back of the cop car, my friends convinced the cops that I needed a hospital. In the emergency room, I refused to sign my commitment paperwork and asserted my rights by reciting verbatim the Emancipation Proclamation to a petrified receptionist. In my eyes, I had single handedly ended the Cold War and John Legend’s song “Stereo” was about me. After they drugged me I woke up with a catheter and proclaimed, “I will never love Big Brother.”

The state mental hospital in Augusta was my second stop, because private facilities are crazy expensive. Upon arrival, they made me undress and counted over thirty bruises on my body from the struggle. I was forced into the shower and I drank the water, feeling thankful it wasn’t gas. The social worker asked me why I was there and I replied, “I just want to know who shot JFK.”

My stay was short, but enough to get me assaulted by a fellow patient. A patient walked up behind me while I watched TV, yanked my hair and yelled “I told you not to do that.” I quickly “stabilized” on meds and casually explained to the discharge committee that this was clearly a case of fight or flight. By my last day, I was playing spades with the CNAs when one asked me, “What you doing here?” 4 days was all it took to pop out with a diagnosis of Bipolar I with psychosis. Ah, labels.

I had business to attend to: I was a plaintiff in an upcoming class action lawsuit. I believe the stress of it caused my “nervous breakdown” and I was days away from the trial. One of my previous jobs was at MAC Cosmetics and one of my co-workers had found a hidden camera in our office. We were being spied on while we were changing in and out of our work clothes.

The trial lasted a week and I walked away with $180,000. After the lawyers' cut, it was an even $100k. I didn’t know then how fortuitous the timing of my mental health crisis was with winning a shit ton of cash.

It took a second psychotic episode to establish a pattern. I retreated to my parents’ house to convalesce. It felt less like being a boomerang kid and more akin to getting the hook, like a poorly conceived vaudeville act. I tried to convey my struggles to my social worker and she told me “I don’t care what you think. I care about how you function.” Never before or since have I been so insulted. It didn’t matter what I thought? I was so pumped with tranquilizers that I slept 16 hours a day. As custom dictates, every mental health professional has to inquire about your desire to harm yourself. When I confessed to my psychiatrist, “I can’t live like this,” he graciously took me off the tranquilizers.

For the next few years I got off and on meds like subway stops on your daily commute. I still had a dwindling 50k in the bank and had little need for a job. I went to live in Chicago, then Portland, but I couldn’t settle my shifting moods and self-pity. It wasn’t until my friends found me incoherent, hitchhiking off the interstate in Atlanta with a forearm tattoo of my social security number that I truly scared myself into reality.

Fully committed, I started working with Megan, a graduate student in Portland State University’s School of Social Work program. She helped me process my internal conflict about needing mental health treatment. I had internalized the stigma of mental illness and projected it upon the "downtrodden," like a bourgeois death ray. I would look around these waiting rooms and not see myself: I saw zombies and addicts. She helped me realize my place in this mental health schema: I was a privileged white girl whose rock bottom was lined with cash.

I took my meds like they were oxygen. I needed them to breathe. I practiced mindfulness in its bastardized western form and it helped me trust my thoughts again. I had two years of self-reflection and liquidity. By the time I decided to get my own Masters of Social Work, I wasn’t too pissed that I had blown through $100k.

I entered graduate school at the University of Georgia like I was an undercover agent. When I started getting psychiatric services a nurse commented, “You’re in school? Most people don’t get it together ‘til their 40’s.” Carefully, I shared my diagnosis with classmates while others talked about “these people” and lamented those “milking the system.” As we built our cadre of mental health allies I learned of other students' struggles: family abuse, sexual assault, eating disorders, and/or needing benefits themselves etc. It was a motley crew that was inspired to serve.

There was an ad in the Flagpole for an overnight position at the local domestic violence shelter. I got the position to offset my ballooning student loan debt. I assumed that everyone there would be some kind of mishmash of subjugated housewives.

What I found was a wide spectrum of survivors. Some needed an undisclosed location to hide in, while others really just needed a place to stay. Clients had severe trauma from their abusers: ranging from seeing their dog killed in front of them to having their house set on fire.

As a social worker, it took some time for my professional boundaries to take shape. Since I worked graveyard shift I would stay up late smoking with clients while learning about their lives and periodically excusing myself to answer the hotline. I would bend rules and let them go “shopping” in the supply closet. It melted my heart when one client told me, “You’re our favorite.” I so wanted them to like me: to think I was one of the "good" social workers. When issues pertaining to their exit dates from shelter came up I just relayed, “That’s not my department.”

I continued on working in various shelters for the next three and a half years. I worked my way up to becoming a case manager, ultimately holding clients accountable for their self-directed goals. You see, people can’t stay in shelters “too long,” but some need so much more assistance than the system provides. It is hard to stabilize your life if you can’t get your mental health in order. Clients in shelter often have long histories of abuse, discarded dreams and/or were never given a chance in life. I’d still have to set their exit dates.

Shelters are often a revolving door, like the criminal justice system. I had some clients that automatically assumed I was a “bad” social worker. Recently, I asked a client if she had a plan to self-harm and she stated, “You’re just worried about your liability.”

I couldn’t tell her I’d been there, just that we can make a mental health safety plan and that I do care. I always let clients know that just because you have a mental health challenge doesn’t mean you’ll never learn to manage it. Sometimes, I would gently remind other social service providers that we are seeing clients in crisis and “come out” as being mentally ill myself. Working with people in crisis requires so much patience that I finally understood that sometimes social workers lose their cool.

My mental health needs still rear up from time to time, but it is manageable. Currently, I have parkinsonism due to my long term use of anti-psychotics. It has been eight years since my diagnosis and I have to reflect on my privilege: my clients with mental illness in shelter often didn’t obtain long term stability and this was due to a lack of resources, such as mental health budget cuts and a lack of affordable housing.

I believe that stability is a goal anyone can achieve if it is self-determined, and if clients have access to sufficient resources to meet their basic needs. I’m so proud that I now work in a Housing First program that offers permanent supportive housing to people experiencing chronic homelessness. In the grand plan for social change, I can only commit myself to the work. I do so voluntarily.

This article first appeared on xojane.com.