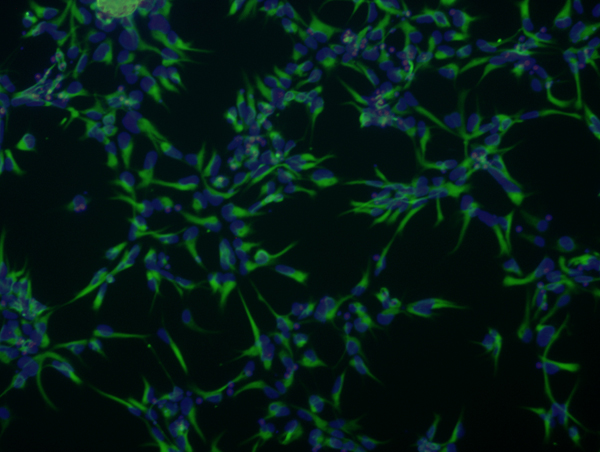 Stem cells like these will help scientists learn more about bipolar disorder.

ANN ARBOR, Mich. — Every day, millions of people with bipolar disorder take medicines that help keep them from swinging into manic or depressed moods. But just how these drugs produce their effects is still a mystery.

Using genetic analysis, the new study suggests that certain medications may help “normalize” the activity of a number of genes involved in communication between brain cells. It is published in the current issue of Bipolar Disorders.

The study involved brain tissue from deceased people with and without bipolar disorder, which the U-M team analyzed to see how often certain genes were activated, or expressed. Funding support came from the National Institutes of Health and the Heinz C. Prechter Bipolar Research Fund.

“We found there are hundreds of genes whose activity is adjusted in individuals taking medication – consistent with the fact that there are a number of genes that are potentially amiss in people with bipolar,” says senior author Melvin McInnis, M.D., the U-M psychiatrist, U-M Frances and Kenneth Eisenberg and Family Depression Center member and principal investigator of the Prechter Research Projects who helped lead the study. “Taking the medications, specifically ones in a class called antipsychotics, seemed to normalize the gene expression pattern in these individuals so that it approached that of a person without bipolar.”

Scientists already know that bipolar disorder’s roots lie in genetic differences in the brain -- though they are still searching for the specific gene combinations involved.

McInnis and his colleagues have now embarked on research developing several a lines of induced pluripotent stem cells derived (iPSC) from volunteers with and without bipolar disorder, which will allow even more in-depth study of the development and genetics of bipolar disorder.

The newly published study looked at the expression, or activity levels, of 2,191 different genes in the brains of 14 people with bipolar disorder, and 12 with no mental health conditions. The brains were all part of a privately funded nonprofit brain bank that collected and stored donated brains, and recorded what medications the individuals were taking at the time of death.

When the researchers compared the gene activity patterns among the brains of bipolar disorder patients who had been exposed to antipsychotics with patterns among those who weren’t, they saw striking differences.

Then, when they compared the activity patterns of patients who had been taking antipsychotics with those of people without bipolar disorder, they found similar patterns.

The similarities were strongest in the expression of genes involved in the transmission of signals across synapses – the gaps between brain cells that allow cells to ‘talk’ to one another. There were also similarities in the organization of nodes of Ranvier – locations along nerve cells where signals can travel faster.

McInnis, who is the Thomas B. and Nancy Upjohn Woodworth Professor of Bipolar Disorder and Depression in the U-M Department of Psychiatry, worked with U-M scientists Haiming Chen, M.D. and K. Sue O’Shea, Ph.D., of the U-M Department of Cell and Developmental Biology. They also teamed with Johns Hopkins University researcher Christopher Ross, M.D., Ph.D. on the new research; U-M and Johns Hopkins have a long history of collaboration on bipolar disorder research.

The research used brain tissue samples from the Stanley  Brain Collection of the Stanley Medical Research Institute in Maryland.

Using “gene chip” analysis to measure the presence of messenger RNA molecules that indicate gene activity, and sophisticated data analysis, they were able to map the expression patterns from the brains and break the results down by bipolar status and medication use. The bipolar and control (non-bipolar) brains were matched by age, gender and other factors.

“In bipolar disorder, it’s not just one gene that’s involved – it’s a whole symphony of them,” says McInnis, who has helped lead U-M’s bipolar genetics research for nearly a decade. “Medications appear to nudge them in a direction that aligns more with the normal expression pattern.”

Among those that were “nudged” were genes that have already been shown to be linked to bipolar disorder, including glycogen synthase kinase 3 beta (GSK3β), FK506 binding protein 5 (FKBP5), and Ankyrin 3 (ANK3).

Find the original press release on the Michigan Medicine website.