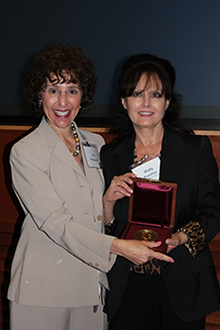 At the University of Michigan Frances and Kenneth Eisenberg and Family Depression Center’s 2013 National and Scientific Advisory Board (NAB/SAB) meeting, NAB member Waltraud “Wally” Prechter was honored with the Mike Wallace Award, which recognizes an outstanding individual who has personally and publicly demonstrated exceptional commitment, courage, support, and leadership in a manner that is consistent with the Eisenberg Family Depression Center’s mission to conquer depression, bipolar disorder, and related illnesses. Prechter established the Heinz C. Prechter Bipolar Research Fund at the University of Michigan in memory of her late husband Heinz more than a decade ago, and since then she has been a tireless advocate in the pursuit of a cure for bipolar disorder. Learn more about her story through this powerful video.