Very large U-M study adds to evidence that mood disorders are points on a spectrum, not completely separate – and could lead to better diagnostic tests 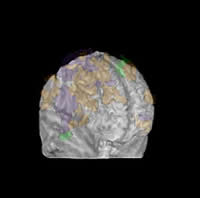 The researchers used powerful brain scanning to look at differences between those with bipolar disorder or depression, and those without.

ANN ARBOR, Mich. — People with depression or bipolar disorder often feel their thinking ability has gotten "fuzzy", or less sharp than before their symptoms began. Now, researchers have shown in a very large study that effect is indeed real – and rooted in brain activity differences that show up on advanced brain scans.

What’s more, the results add to the mounting evidence that these conditions both fall on a spectrum of mood disorders, rather than being completely unrelated. That could transform the way doctors and patients think about, diagnose and treat them.

In a new paper in the journal BRAIN, researchers from the University of Michigan Medical School and Frances and Kenneth Eisenberg and Family Depression Center and their colleagues report the results of tests they gave to 612 women – more than two-thirds of whom had experienced either major depression or bipolar disorder. The researchers also present data from detailed brain scans of 52 of the women, who took tests while brain scans were conducted.

The number of patients involved is large for this kind of mental health study – which makes the findings more meaningful. The researchers pooled data from several U-M studies, including the Prechter Longitudinal Study of Bipolar Disorder. They focused on results from women to take gender differences out of the mix. 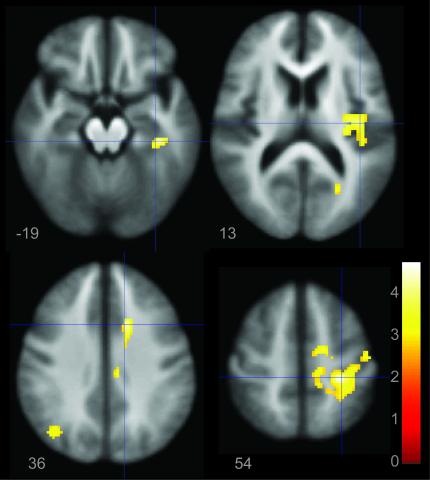 These regions of the brain were most associated with poor performance on the "fast thinking" test, both among women with depression and women with bipolar disorder.

Seen as groups, women with depression or bipolar disorder did equally badly on the test, which required sustained concentration. The test asked them to react rapidly when certain letters flashed briefly on a screen, amid a random sequence of other letters. Compared with the group with no mental health conditions, the groups with either diagnosis lagged noticeably on this standard test of cognitive control.

And while many individual women with depression or bipolar scored as well on the test as healthy participants, nearly all the test-takers in the bottom 5 percent of performers had one of the two mood disorders.

On the brain scans, the researchers found that the women with depression or bipolar disorder had different levels of activity than healthy women in a particular area of the brain called the right posterior parietal cortex. In those with depression, the activity in this area was higher than in healthy individuals, while in those with bipolar disorder it was lower. The area where the differences were seen helps control "executive function" – activities such as working memory, problem solving and reasoning.

"In all, we show a shared cognitive dysfunction in women with mood disorders, which were pronounced in the cognitive control tests and more nuanced in scans," says Kelly Ryan, Ph.D., a U-M neuropsychologist and lead author of the study.

"These findings support the idea of seeing mood disorders dimensionally, as a continuum of function to dysfunction across illnesses that are more alike than distinct," adds Ryan, who sees patients as a clinical assistant professor in the U-M Department of Psychiatry. "Traditionally in psychiatry we look at a specific diagnosis, or category. But the neurobiology is not categorical – we’re not finding huge differences between what clinicians see as categories of disease. This raises questions about traditional diagnoses."

Ryan and her colleagues note that this view of mood disorders is growing in favor, and even the National Institute of Mental Health has put it forth as an area of research focus under the name Research Domain Criteria. But they do not suggest that mental health clinicians should use the test or brain scans given to the study participants to spot risks for or diagnose a mood disorder.

Under RDoC, NIMH is working with researchers to develop new ways of classifying mental health disorders, independent of the clinical diagnostic codes found in the guidebook that clinicians use, called the Diagnostic and Statistical Manual of Mental Disorders.

Senior author Scott Langenecker, Ph.D., formerly at U-M and now at the University of Illinois, Chicago, adds, "The RDoC initiative is not meant to replace this clinical diagnostic system. It is designed to extend ways of understanding neurobiology, performance, and genetics at natures' seams, rather than at groupings of clinical symptoms based on a patient's current memory of recent symptoms and clinician observations of signs. The RDoC initiative is a recognition that we need to rely more heavily on what these neurobiological results are telling us – mental diseases have more overlap in the basic brain and genetic signatures."

The researchers hope that their findings will help other researchers, who could use these tests as a way to divide participants up for further study – an "intermediate phenotype" for mood disorders.

For example, researchers could focus on studying people with and without classical mood disorders by first giving them the cognitive control test, and then using the expensive brain-scanning option only on those with poor performance. This could influence strategies future clinical screening, diagnosis and treatment.

More about the study

The research involved 150 healthy women, 266 women with major depression that was either active or inactive at the time of testing, and 202 women with bipolar disorder who were not in a manic state when tested.

All participants took a test that measures the ability to sustain attention and respond quickly – to focus one’s brain, in essence. Then, 17 of the healthy women, 19 of the depressed women and 16 of the bipolar women took the same test again while inside the scanner at U-M’s Functional Magnetic Resonance Imaging laboratory. Ryan notes that because of the expense of such scans and limits on finding participants, the fMRI group is still too small to make strong conclusions. She hopes others will be able to carry out further imaging studies of this issue.