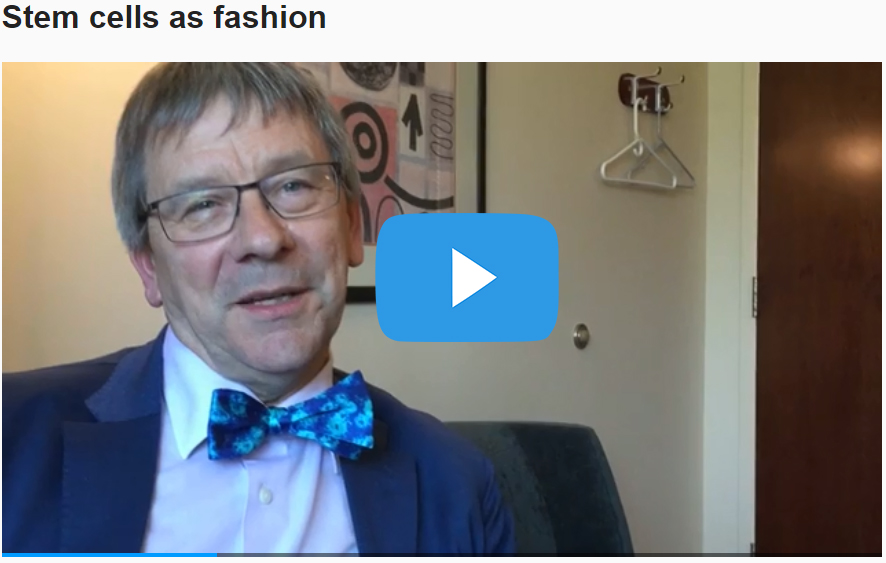 Watch a video of Dr. McInnis talking about this project.

This month's donors to the University of Michigan's Prechter Bipolar Research Fund will receive silk scarves and ties bearing images of microscopic stem cells, their nuclei a fluorescent turquoise on a cobalt backdrop.

Dr. Melvin McInnis, who specializes in the genetics of bipolar disorder at the University of Michigan, wears one of the ties and displays one of the scarves that bear images of human stem cells. (Photo: Robin Erb Detroit Free Press)

They're artful conversation starters about potentially life-saving research — pieces that "capture the beauty and intrigue and complexity behind all of it," said Stephanie Prechter, 35, of Ann Arbor.

The fund is named after her father, automotive genius Heinz Prechter, who committed suicide in 2001 after battling bipolar disorder for years. Prechter's family has been a major backer of the Ann Arbor center, advocating for research that may expose the genetic underpinnings of the disorder.

The images for the scarves were taken from cells that were formerly skin cells taken in a pencil eraser-sized sample from one of dozens of willing participants in the center's research. They were reduced in a laboratory to an embryonic-like state, then coaxed into becoming early brain cells and finally dyed in blue hues to illuminate their nuclei.

By feeding and monitoring them daily, scientists have learned that these cells tend to be more "reactive" and "sensitive" than normal when they signal to each other, said Dr. Melvin McInnis, who is leading the research.

"They just fire more intensively and in a way that is significantly different than (cells from) an individual that doesn't have bipolar disorder," he said.

Certain chemicals — lithium, for example — appear to calm them.

It's early research for sure, and one of dozens of research projects at the U-M Frances and Kenneth Eisenberg and Family Depression Center. But it's promising, McInnis said.

"By understanding the causes of bipolar disorder, we will be able to develop new treatments for bipolar disorder and most importantly, to be able to prevent episodes ... and allow people to live happy, normal lives," McInnis said.

The scarves and ties are being offered to anyone who donates $250 or more to the fund during May, which is Mental Health Awareness Month.

Researchers occasionally get requests from patients who want to be able to visualize a cancer cell, for example, said O'Shea, a cofounder of BioArtography, which transfers microscopic tissue photography into art.

In this case, about eight of the blue splotches now transferred in images to silk could fit on the head of a pin, said O'Shea.

It was just before Christmas when she snapped the picture that ultimately would be used on the silk. The fluorescing blue splotches reminded her of festive wreaths, she said.

Disease is all the more frightening because it's unseen. Art can give it shape and substance to fight, O'Shea said. "You're controlling it, owning it," she said.

Article as it appeared on the Detroit Free Press website.