Some people with a bipolar disorder diagnosis have trouble managing relationships with friends and family members. Research at University of Michigan is helping us understand the complex challenges of this brain illness. With Valentine’s Day around the corner, two department of psychiatry experts weigh in on bipolar and relationships. 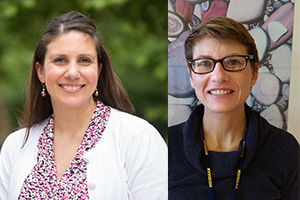 What is bipolar disorder and how is it different from unipolar depression?

Kelly Ryan, Ph.D.: Bipolar Disorder is a condition characterized by shifts in mood, energy and activity levels, usually shifts between deep depressions and severe highs. These shifts in mood state can be frequent and cause significant problems in social, personal, and occupational functioning. Bipolar is different from unipolar because of the bi-polarity of symptoms — the depressions and severe highs (mania) — whereas unipolar depression is associated with just depressions. The prevalence of bipolar disorder is about 2.5% of the population, but the leading cause of disability in adults aged 18-44.

Why do people with bipolar have trouble managing relationships?

Maria Bastida, N.P.: People who have bipolar disorder can, and certainly do have positive, supportive, and meaningful relationships with family and friends. However, the extreme mood fluctuations and symptoms associated with bipolar disorder may pose unique challenges and difficulties to manage.

Relationships can be fun and uplifting, but also stressful at times; and people with bipolar disorder are sensitive to both positive and negative stress, which may trigger symptoms of their disorder. A new relationship can be exciting and adventurous, but changes in routines, sleep patterns, and activity can precipitate a mood episode.

Symptoms often associated with hypomania or mania such as distractibility, intrusive, and domineering behavior may cause problems with communication in the relationship, leading to feelings of being misunderstood, frustration, and conflict. Sleep disturbance, spending sprees, reckless behavior, increase in alcohol and substance use, and promiscuity that is unusual for the person, may also generate confusion, anger, and fear.

The guilt and remorse following a manic or hypomanic episode, in addition to depressive symptoms of dysphoria and withdrawal, can leave everyone in the relationship feeling even more perplexed and helpless. These

symptoms might leave a bleak picture, but despite the rollercoaster of emotions in bipolar disorder, relationships can thrive and flourish with appropriate treatment and education about how to ride the waves of the illness, while also working towards acceptance, understanding, and self-care.

What has research found out about the illness and strong emotional bonds?

There is quite a bit of research looking at the relationship between bipolar illness and social relationships. Research has found that those with weaker childhood attachment, more difficulties forming adult relationships, and less support from their social network have greater difficulties with social relationships. From a more neurobiological perspective, bipolar illness can be associated with problems accurately recognizing or accurately perceiving others’ emotions, leading to misinterpretations of situations and interactions and regulating positive emotion, as measured by performance tests and neuroimaging.

Prior work from the Prechter Longitudinal Study of Bipolar Disorder has shown that those with bipolar illness misperceive specific emotions at a higher rate than those without the illness, using tests that measure one’s ability to perceive emotions through voice or by looking at faces.  Also, we have shown that emotion perception is negatively related to functional outcomes, such work status, while other studies indicate this is the case in how well one functions in relationships.

This Valentine’s Day, as well as any day of the year, what can family members do to help their loved one with bipolar disorder?

Maria Bastida, NP: Family members who have a loved one with bipolar disorder can help them this Valentine’s Day, as well as any day of the year, by providing continued support and encouragement in the management of their disorder. Educating themselves about bipolar disorder and its treatment is important to better understand warning signs or prodromal symptoms, and encourage treatment and medication adherence. With this knowledge and understanding, family members may be able to help obtain early intervention for their loved one when needed, possibly diverting the development of a fully syndromal mood episode.

Encouraging healthy lifestyle behaviors, such as keeping regular sleep schedules, avoiding alcohol, and engaging in regular exercise and nutrition will also help the person with bipolar disorder maintain stability. Unfortunately, stigma still exists for people with bipolar disorder, which may create feelings of embarrassment or shame. But families can help deflect the effects of stigma by conveying an attitude of tolerance, patience and acceptance.

Finally, instead of always highlighting the challenges and difficulties associated with living with bipolar disorder, staying focused on the positive attributes each member of the family brings to the group will only help strengthen family relationships and foster both better emotional and mental health for everyone involved.

We’re recruiting research participants with bipolar disorder as well as healthy controls for the Prechter Longitudinal Study of Bipolar Disorder. The goal of this study is to identify potential illness patterns. Bipolar disorder is known to run in families, but most genes involved have not yet been identified. Additionally, every individual’s response to the illness, life circumstances, and treatment can vary widely. Studying many individuals over time will allow scientists to better understand how to treat and eventually, prevent bipolar disorder. Click here for more information on research participation.