Our team presented several posters at the Midwest Neuropsychology Group's Annual Meeting on 4/26/2019. This year’s meeting was hosted by Carol Persad, Ph.D., ABPP-CN and the Prechter Program's own David Marshall, Ph.D., ABPP-CN. The event featured informative sessions on current topics in pediatric and adult neuropsychology. 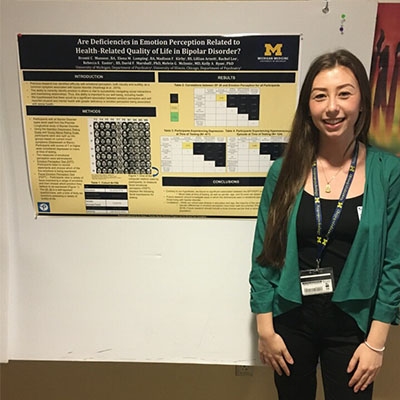 Difficulty with emotional perception is a symptom of Bipolar Disorder. We were curious to know if this particular cognitive deficit had any effect on mental or physical health. Participants were administered measures of auditory and visual emotion perception, mood (mania and depression), and self-report measures for mental and physical health. Ultimately, we found no significant associations between low performance on emotional perception measures and health, regardless of gender, IQ, or mood state at time of testing. Our sample majority was largely white and female, thus future studies would benefit from using a more gender and racially diverse sample.

Poster Title: The Influence of a Functional Remediation Intervention on Neuropsychological Performance in Bipolar Disorder

An intervention tailored for improving daily functioning in Bipolar Disorder, called Functional Remediation, was tested with the Prechter Longitudinal cohort last year. Neuropsychological testing was performed before and after the 21-week group training sessions to determine if there was any cognitive improvement. After completing analyses, there were no significant improvements found, however, our sample was small, our participants were not remarkably cognitively impaired to begin with, and consistent attendance proved difficult for participants. We suggest that the intervention would benefit from being tested again in a further impaired sample and by facilitating transportation, finding more accessible timing for sessions, and by adapting the intervention to better fit an American sample. 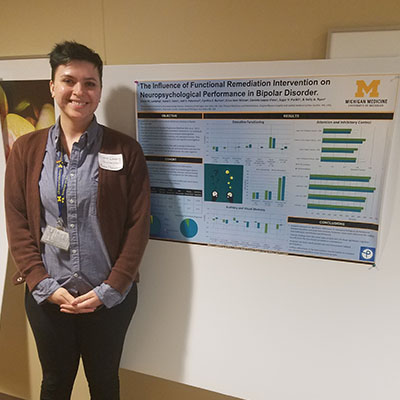 Poster Title: Relationship between burden of psychotropic medications and cognitive performance in a large sample of individuals with bipolar illness
By Madison Kirby, BS 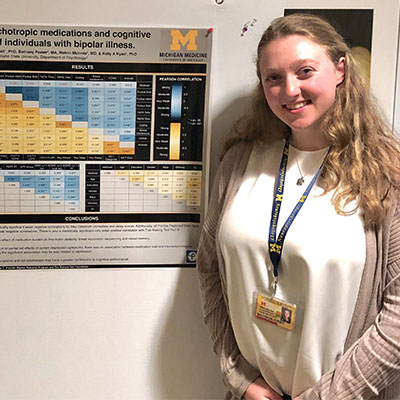 The contribution of medication to cognitive impairment in bipolar illness is complicated to control for and results in mixed findings. To address this, we created a single medication variable, called a medication load, to assess the influence of total psychotropic medication (e.g., antidepressant, antipsychotic, mood stabilizer, etc.) use on cognition. We predicted that those with greater medication usage (greater burden of psychotropic medications) would show poorer performance on cognitive tasks. We administered a neuropsychological test battery and recorded medications at their initial visit. Analyses between medication load and neuropsychological test performance showed significant correlations for some tests on fine motor dexterity, timed visuomotor sequencing, and visual memory. However, when we controlled for current depressive symptoms, these findings were no longer significant, suggesting depressive symptoms may have a greater contribution to cognitive performance than medication.