Coping with Bipolar Disorder During the Pandemic 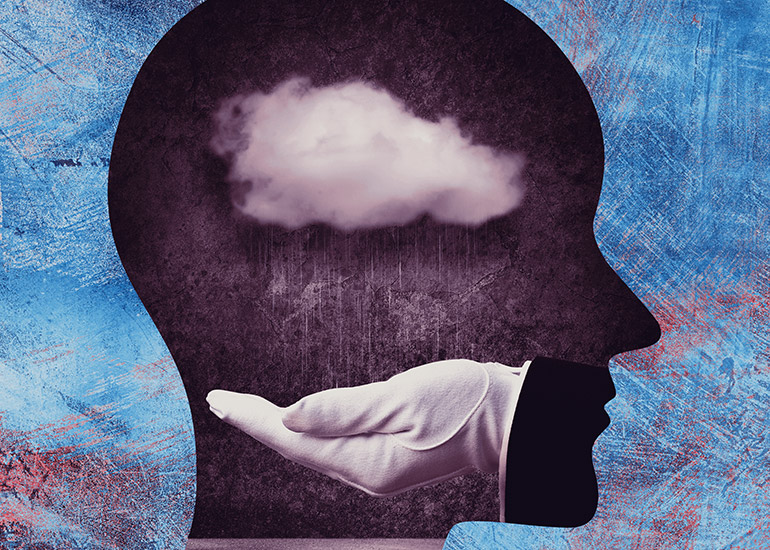 “Immediately after the pandemic began, we started noticing difficulties among our participants,” says Melvin McInnis, M.D., the Thomas B. and Nancy Upjohn Woodworth Professor of Bipolar Disorder and Depression and director of the Heinz C. Prechter Bipolar Research Program. McInnis says individuals who are struggling with bipolar disorder often have residual symptoms even though they are not experiencing an episode of depression or mania. Typically, in the best of times they have ongoing and fluctuating mood symptoms that may include irritability or a sense of being stressed out a good deal of the time. This interferes with daily functioning and they can be even more impaired when extra stressors — such as a global pandemic — arise. “What is the result of that? They’re already running on reserve, often on sheer force of will, and the added stress can be the straw that breaks the camel’s back.” That is when interventions are necessary, says McInnis.

To measure the effect of the pandemic on individuals with bipolar disorder, McInnis and his colleagues conducted a survey of some 500 people. Of these respondents, 26% were in a control group of people who don’t have bipolar disorder and don’t have a history of psychiatric illness or substance abuse.

Counterintuitively, the mental health of people in the control group, in the short term, was affected disproportionately greater than that of the people with bipolar disorder. This was not a surprise to McInnis, however, who says this is because people who normally experience only a low level of stress-like symptoms notice it more when their mental health is affected. But those people also recover more quickly, he says, and the survey results confirmed that. People with bipolar disorder, on the other hand, “stayed stressed longer and stayed higher longer,” says McInnis. And their symptoms abated more slowly than those of the healthy controls. “Overall, we’re seeing an upward turning of the screw.”

The study also showed that there was a difference between men and women. “Routines were less likely to be disrupted and effects were less likely to be visible in males,” says McInnis. “There are a host of ideas why that could be.” McInnis speculates that stay-at-home orders affect women more profoundly because, “Who manages the home? By and large, it’s not the males who manage the home.” The difference between men and women was apparent across the board, in both the control group and the group of individuals with bipolar disorder.

McInnis says the study also showed a difference among age groups. “People above 60 in our sample, they were less likely to be noticeably affected by the effects of the pandemic. That’s something that was a bit of a surprise to us.”

In clinic, McInnis is seeing patients who are “adapting fairly well to the COVID era and quite like the option of just seeing us on Zoom, because they don’t have to go to the clinic, they don’t have to get in a car, etc.” On the other hand, he’s observed an increase in stress, alcohol, and marijuana use among some of his other patients. “It’s gone up across the population, but more among people with bipolar disorder.”

McInnis recommends that his patients keep a regular routine, get exercise, and eat healthy food, but he admits this isn’t always easy. “Remember what Dolly Parton said? ‘It costs a lot of money to look this cheap.’” In other words, “a simple routine is incredibly difficult to maintain.” To find the motivation to do the basics, McInnis says, “We’ve got to figure out what we’re going to do and what we are not going to do. We need to set our priorities.”

McInnis is also an advocate for levity. “Every day needs to have a little song,” he says. “Take some time, even if it’s five or 10 minutes, just to do something that’s fun, doing something different on the instrument you play or reading 10 minutes of a book. … Prioritizing any amount of time is good.”