Updates from the O'Shea lab.

This spring and early summer have been a time of change — of finishing projects and moving. We are writing papers and taking on new jobs and projects. Henry Tran, who received his Bachelor of Arts with high honors for work in our lab studying bipolar patient (BP) organoids, is leaving to attend graduate school at the University of Chicago; he has been replaced by two undergraduate students, Hannah Young and Finn Swaty, who we hope will also stay with us as they complete their degrees.

We’re all working to get definitive data or to write final bits of manuscripts — Kate Campbell, Ph.D., is finishing her analysis of calcium signaling in control and bipolar patient glutamatergic neurons, Dan Schill, Ph.D., is analyzing RNAseq data from bipolar patient GABA neurons, Durga Attili, M.S., is studying the genes and proteins produced by bipolar brain organoids. All of these projects are focused on developing particular neural cell types from skin cells that have been converted to stem cells in a tissue culture dish. This allows us to begin to understand how various cell types in bipolar brains are different from controls using living cells.

One project that involves the entire lab is testing the role of proteins contained in exosomes in bipolar disorder cells. Exosomes are extremely small lipid bound particles that play two very different roles in the brain. One role is binding and removing toxic proteins from brain cells and then transporting them out of the cell and from the central nervous system to the periphery where they can be removed from the body. Their other role is in cell-cell communication where proteins produced by astrocytes are bound by exosomes, then transported from the cell and delivered to neurons to nurture and direct neuronal behavior. Both are critical to the normal development and function of brain cells and we believe they may be altered in the brain of bipolar disorder patients. 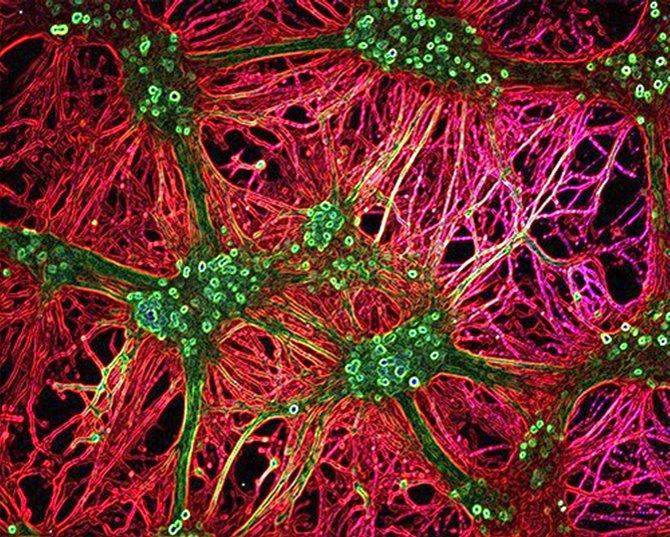 The image to the left is one of two that Cindy DeLong, Ph.D., submitted, and was selected to be displayed at the Ann Arbor Art Fair this year. It illustrates the warp and weft of the brain neuropil, a dense network of interwoven nerve fibers and their branches and synapses. Green are neuronal cell bodies and red are processes that we use to model the bipolar brain. We hope you will check out Dr. DeLong’s work on bipolar disorder at bioartography.com.

Special thanks and an award. In addition to the many generous individuals who support our lab, this year we received an important gift from the Hazel Ruby McQuain Charitable Trust, given in honor of advisory board member Clyde Bartter, specifically to advance our exosome work. Part of this gift funded the 2022 Clyde Bartter Bipolar Research Scholar Award, which went to Durga Attili, M.S., and his highly technical work creating brain organoids (mini-brains in a petri dish) from induced pluripotent stem cells that will enable analysis of the developmental differences between brains derived from patients with bipolar disorder and those without.