We have entered an exciting new era of the PRIORI project. Over the past several years, Drs. Emily Mower Provost and Melvin McInnis have worked tirelessly to develop a smartphone application and data pipeline to predict mood state changes based on variations in speech during phone calls and clinical interviews. The ultimate goal of such a technology is to improve our ability to identify necessary points of intervention for individuals living with bipolar disorder that are passive, personalized, and in real time. To do so, we must be able to capture and analyze speech across many different contexts and in “real life.” With the critical and generous support of the Baszucki Brain Research Foundation, Drs. Sarah Sperry and Emily Mower Provost have initiated a study that deploys a new version of the PRIORI app that captures 30 second snapshots of speech every 15 minutes as individuals go about their normal daily lives.

Extending the PRIORI app to sample speech when participants use their phones requires rigorous testing and validation. PRIORI works by incorporating aspects of speech to recognize emotion valence and arousal. Valence refers to how negative or positive one might be feeling and arousal refers to how activated vs. calm/tired one is feeling. A high arousal negative emotion might be “frustrated” in contrast to a low arousal negative emotion which might indicate “bored.” A high arousal positive emotion might be “excited” in contrast to a low arousal positive emotion of “calm/content.”

Our goal is to see whether the PRIORI ratings of emotion valence and arousal detected via speech match individuals’ reports of their own emotions. To do so, individuals living with bipolar disorder are completing surveys on their smartphones that ask them about how they are feeling in real time. These questions will correspond in time with speech collected by the PRIORI app. Drs. Sperry and Mower Provost will then be able to assess whether changes in speech are associated with self-reported changes in emotions. This will allow us to better build a framework that can detect whether anomalies (changes) in speech are meaningful in the moment. 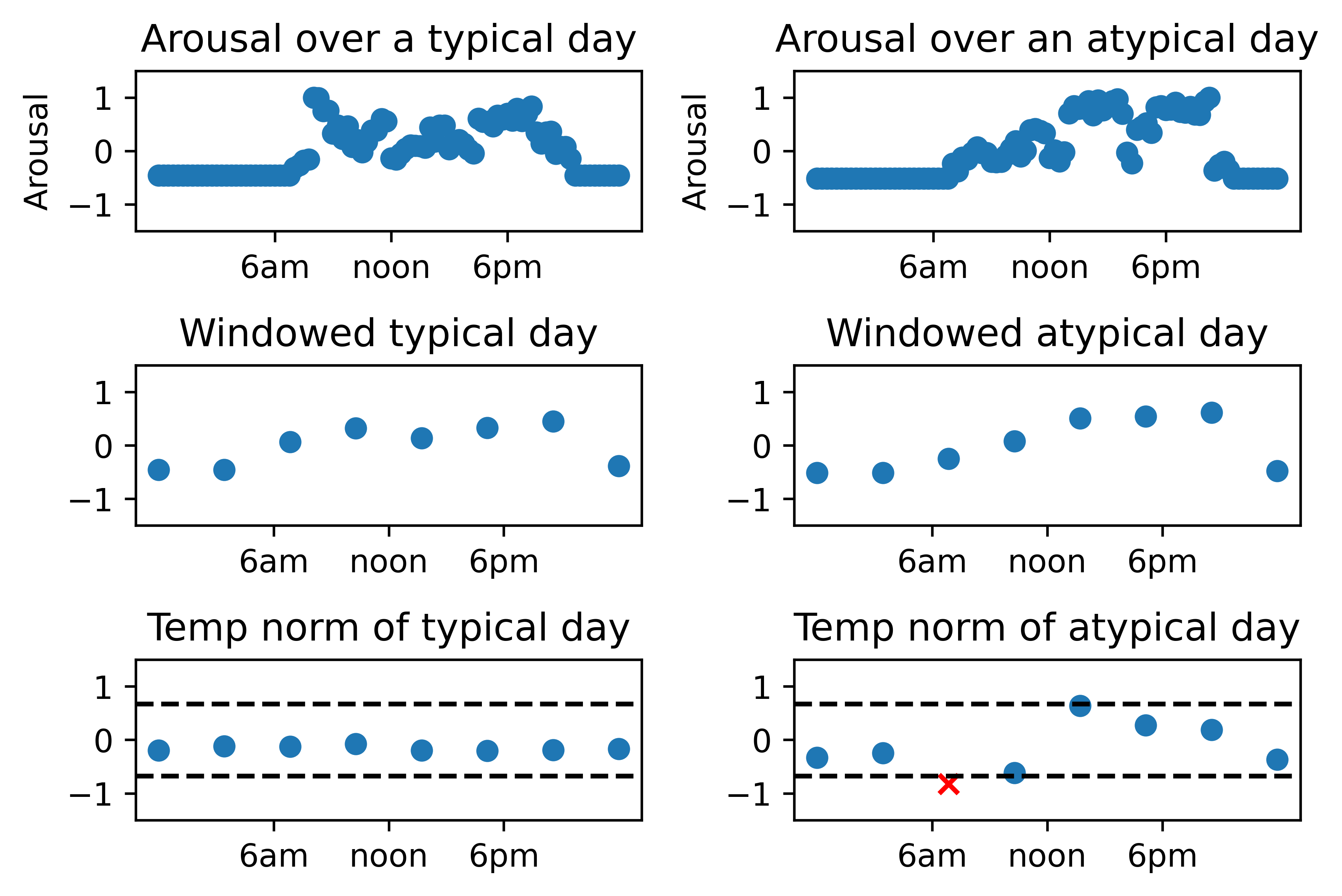 To show an example of how this might work, please refer to the included figure to the left that represents hypothetical data from an individual with bipolar disorder. The left column is a typical day, the right column is an atypical day. The first row shows raw values. The second row shows averaged values for that person. The third row shows our algorithm that detects when a specific value is an anomaly for that person — in other words, when emotional arousal reaches a level that is abnormal for that individual compared to their typical level of emotional arousal. The red X’s represent times when these anomalies are detected. If these X’s match a change in self-reported emotion, we are that much closer to validating the PRIORI app to be used in real-world environments. This represents an exciting new step in the PRIORI story.

The Prechter Research team is grateful to our participants who are helping us test and validate this important new version of the PRIOR app. We will continue to collect data for up to 12 months and enroll new participants interested in using PRIORI.