Off to the Races

As a freelance reporter on a Grand Rapids, Michigan, daily, my intent in the latter part of the 20th century was to work steady "forever" on this job I loved so much. But, after three months, my submissions were nil. "I don't have any more gumption to get up any more stories," I told my editor. My mood had turned into a severe depression. But soon I was Off to the Races. Fired with mania, I got into my car and drove, and drove--and when the gas was empty, I found myself in mid-Wisconsin. 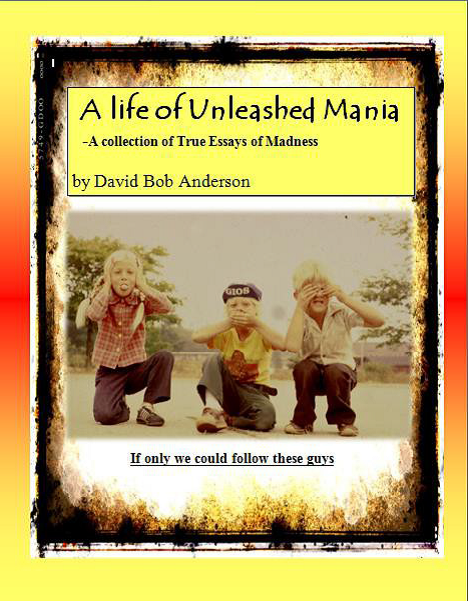 A Life of Unleashed Mania, available on Amazon.

As on all these 'vacations,' I found a phone booth and called 9-1-1. A cop car soon arrived with two officers. They took me to a local mental hospital. We stood at the nurses’ desk where I would be checked in. As we waited, I slipped a note on paper to one of the officers. He stared after he read on. The other cop took it away from him, and did not waste time as he ripped it up.

After the men left, my eyes spotted a unit phone for patient use. I hurriedly called my former editor at The Grand Press. "I'm on a nut ward," I explained. "Can I do an article about this?" He stumbled to find words. Little did I know this was to be the last conversation!

I was then put in a private patient room. All staff who came in contact with me wore blue rubberized gloves. Previous to this, I had Hepatitis A, which had run its course and was now non-contagious. But the staff did not want to take chances. Even my dirty sheets and clothes were washed alone.

Soon after, the hospital employees took a collection of seventy dollars so I could leave and go back to Michigan. I was told I could go that night or in the day light hours. I chose that night. As a male held open the glass door to my freedom, I walked through. "See you next year,” I joked. He looked at me as he laughed.

As I drove, I was on 'manic alert.' "Am I being followed?” “Will my gas run out again?” I stopped at a cheap hotel. For $8 I rented a room for the night. I went to the bar there and, in my socks, ordered water. A man with cowboy boots looked at me with contempt and ordered a whiskey from the bartender. In my mental illness I 'reasoned' he was Ronald Reagan.

Though I was freaked by this whole trip back, I had made it....

The above is an excerpt from the author’s book A Life of Unleashed Mania, available on Amazon.