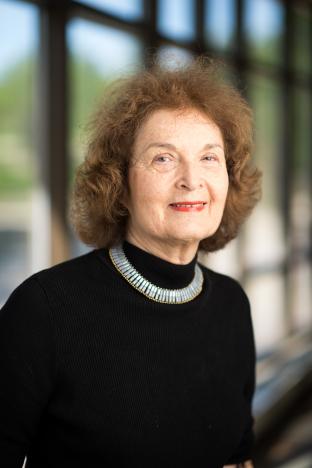 Monica Starkman, M.D., is a proud alumna of the University of Michigan Medical School, class of 1963, and the University of Michigan Department of Psychiatry residency program which she completed in 1972. For many decades Dr. Starkman pursued her primary passions, with a long and fulfilling career of NIH-funded research; clinical activities as the founding director of the Psychiatry Program in Consultation-Liaison Psychiatry, and teaching. She is now an Associate Professor of Psychiatry, active emerita, and member of the Depression Center at U-M. She also just published her first novel, titled, "The End of Miracles." We sat down with her to catch up.

Dr. Starkman, tell us about your upbringing and how you decided to go into psychiatry.

I was born and raised in Manhattan. My parents were both from Eastern Europe. Yiddish was my first language, I learned English on the streets. My father was a scholar of Yiddish literature. He was a journalist, an essayist, and a lecturer. He had a wonderful library filled with many English books. One of these books was "The Interpretation of Dreams" by Sigmund Freud which I read as a teenager and found to be fascinating.

I went to excellent public schools in New York City. I had a wonderful junior high school science teacher, and she inspired my interest in science. I went on to graduate from the Bronx High School of Science in 1955. My high school had a unique environment for the time: boys and girls were treated equally as potential scientists. From there, I went on to major in biology at Brandeis University.

During the summers I worked at Mount Sinai back in New York as a technician in the thyroid diagnostic and treatment center. Part of my job was to obtain data about patients coming the next day by looking through their charts on the medical units and bringing back specific information. Reviewing charts was my favorite part of the job. After some time, the head physician of the unit talked to me about going to medical school, and I was shocked. I thought I was heading for a job as a technician in a research lab, and never imagined such a career path for myself.

As I thought about it more, I went ahead and applied to medical schoosl and was accepted at New York University. When I married after my first year there, I transferred to the University of Michigan. At each school, only eight percent of the class was female.

I then completed a rotating internship at Saint Joseph's Hospital in Ann Arbor, and was the only woman among that year's group of interns. During this internship we rotated through the emergency room, OB/GYN, medicine, and more. I remember being accosted by the chief resident the morning I started surgery with the warning: "You'll have to stand for five hours in the OR, and if you can't do that, you should say so right now." By the end of the rotation, he was assigning me to close up the incisions.

After my internship I became interested in human genetics and completed a two year fellowship in that field. At this point I realized that I needed to train in a clinical specialty. Psychiatry was on the cusp of adding an intriguing biological component, and was especially appealing.

What did you focus on during residency?

During residency, the department brought in the famed Dr. Herbert Spiegel to teach us hypnosis. Afterwards, another resident and I did an experiment: he ran an EEG machnine whle I self-hypnotized myself. The striking EEG changes seen during the trance state were an excellent demonstration of how psychological experiences translate into biology. This theme became my career interest: studying the mind-body relationship.

Tell me about your research career.

The Labor Room:Much of the research I did was based on clinical work. For example, I completed a study on women's psychological reactions to the new technology of fetal monitoring occurring in the labor room. It turned a peak experience of women into being in an intensive-care-like setting, with attached belts and equipment emitting constant beeping sounds

Collaborations: Early on, I realized that I would need to put together a multidisciplinary group of researchers to do these studies, since no one person can master all the techniques needed. Fortunately, our Department of Psychiatry and the University of Michigan had superb people who responded with interest and creativity and became valued and inspiring collaborators. In our department, I partnered with Drs. Bruno Giordani and Stan Berent for the neuropsychological components, Dr. Jim Shipley on sleep studies, and Dr. Scott Langenecker on MRI studies. For the pheo/panic studies, colleagues were Drs. Ollie Cameron and Randy Nesse. Lucky me to have such collaborators!

Tell us about your first novel, "The End of Miracles."

I always wanted to bring my love of the arts and science together. From an early age I had studied music, music theory, and composition at the Juilliard Conservatory on weekends. But it is my novel that interweaves my medical and artistic interests. The story was sparked by consultations/therapy I did with two women with false pregnancies (pseudocyesis). Inpatient scenes reflect my experiences on our units as a resident, and chapters involving outpatient therapy reflect our work as clinicians. Over the decades I worked on the book when time permitted, studying novels by excellent authors to see how they solved the problems I was running up against as I wrote. Happily, the novel is being highly praised by both reviewers and readers. It is also an International Book Awards 2016 Finalist in literary fiction. More information about the novel can be found online at Amazon: The End of Miracles.