“Human beings are complex and interesting entities; I’ve always found the human mind to be fascinating.”

Stephen Strobbe, Ph.D., RN, PMHCNS-BC, CARN-AP, FIAAN, FAAN, knew he had found his niche in his first job as a psychiatric aide in a residential treatment facility for mentally ill young adults. When he transferred to a hospital, he found his calling as a nurse.

“Once I got into that setting and saw how smart, strong and compassionate the nurses were, I wanted to do that,” he said.

Now a University of Michigan School of Nursing (UMSN) clinical associate professor with three decades of experience as a nurse and scientist, Strobbe has witnessed a substantial shift in how mental health and substance use disorders are treated by health care professionals and the general public. 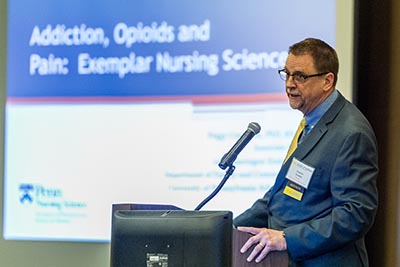 “It’s been a long, painfully slow process,” said Strobbe, who also holds an appointment at U-M’s School of Medicine, Department of Psychiatry and is a member of U-M's Institute for Healthcare Policy and Innovation.  “An important step was in the 1990s which was designated as the ‘Decade of the Brain.’ That was one of the first times depression was brought out as a disease, not a personal flaw. That helped more people come forward and reduce the stigma.”

Strobbe says it is exceedingly common to see connections in mental health and substance misuse concerns.

“If a person has a mental health condition, it increases the risk that they’ll have a substance use disorder at some time in their lives,” he said. “Conversely, substance use can mask, precipitate or exacerbate symptoms of mental health conditions. There’s a really broad overlap. It’s not surprising when you consider the powerful role emotions and cognition play in our behaviors.”

Strobbe is not just a witness to the changes; he’s been an advocate throughout his career including as the first clinical director of U-M’s Addiction Treatment Services and as president of the International Nurses Society on Addictions (IntNSA).  He cites a collaborative statement co-written while president of IntNSA as one of his proudest professional accomplishments.

“It calls for an alternative-to-discipline approach for nurses and nursing students,” he explained. “Nurses are not magically exempt from substance use disorders. Using a humane approach to address the problem is the best way to care for them and to protect public safety. The sooner we acknowledge that and address it in a healthy way, the better off we all will be.” 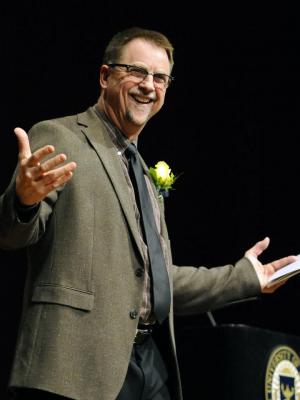 Strobbe carries that openness into his teaching at UMSN.  He’s known for taking time in classes to make sure students learn how to identify and manage the stressors in their lives* and that they are aware of the resources that are available to them. He even offers extra credit to students who report their self-care behaviors.

“We as faculty need to be sensitive to the tremendous amount of stress that our students are subject to,” he said. “They come to us with histories of anxiety, depression and trauma, and things happen while they are here. The undergrad experience occurs at such a sensitive stage developmentally.”

In addition to practicing self-care, Strobbe wants UMSN students to be prepared to care for patients with mental health and substance use disorders even if those are not their specialization.

“All nurses are already involved in this work,” he said. “Students and clinicians will see patients with depression and anxiety disorders in virtually every health care setting, so it’s not a question of if our students will treat those patients, it’s only a question of if they’ll do it well.”

That’s why Strobbe is an advocate of Screening, Brief Interventional and Referral Treatment (SBIRT) as an evidence-based approach to address substance use by incorporating screenings into more patient-provider interactions, even if seemingly unrelated. It was the main focus of his work as a Fulbright Scholar through which he partnered with faculty and students at a number of Brazilian universities to increase knowledge and implementation of SBIRT.

“This approach has the potential to prevent or reduce substance use, to help people from developing addictions, and to direct them to specialized treatment when needed,” explained Strobbe.

Strobbe shares that he also has a personal interest in addictions and recovery.

“Self-disclosure is an interesting phenomenon,” he said. “It’s important to know there are many successful examples of recovery. In the U.S. alone, there are between 25-40 million individuals who are in remission or recovery, which is one of the best kept secrets in our society.”

While Strobbe is encouraged by the progress in treatment, he’d like to see even more changes.

“If I had my way, we would turn society upside down and dedicate many more resources toward mental health instead of trying to treat people in a tertiary capacity after illnesses have set in,” he said. “There are so many protective factors that are grossly underutilized. We’re getting greater insight all the time into how experiences, both positive and negative, can influence us for our entire lives. Trying to pretend mental health disorders don’t exist hasn’t worked very well. There’s strength in being able to admit vulnerabilities and to accept support.

This story was originally published by the U-M School of Nursing here: https://nursing.umich.edu/about/news-portal/201908/7094