Spending an hour in talk therapy with a trained counselor costs much more, and takes more time, than swallowing an inexpensive antidepressant pill. But for people with a new diagnosis of major depression, the costs and benefits of the two approaches end up being equal after five years, a new study shows.

The study suggests that more people newly diagnosed with depression should have a chance to try individual and group sessions of cognitive behavioral therapy, or CBT, as their first treatment, if they would prefer therapy over taking an antidepressant medication. 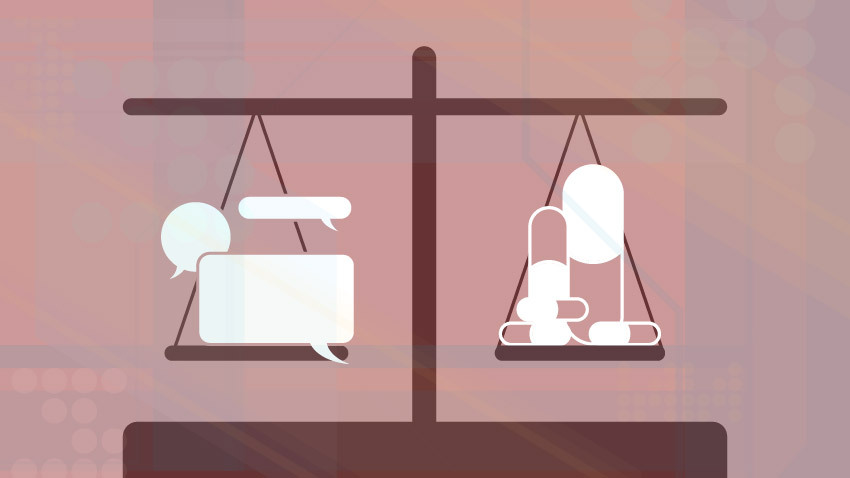 A team of researchers from the University of Michigan and Harvard University published the findings on talk therapy and depression in this week’s issue of Annals of Internal Medicine.

National physician groups such as the American College of Physicians endorse giving people newly diagnosed with depression the option to choose either approach. But this would mean expanding the capacity of the healthcare system to provide greater access to psychotherapy than is currently available.

However, making CBT more available could save money for the companies and government agencies that pay for depression care – including by giving patients more depression-free time leading to improved performance at work.

“One might assume that antidepressants are more cost-effective than psychotherapy, because they don’t require travel time, time away from work, and as many contacts with providers as therapy does,” says first author Eric L. Ross, M.D., a psychiatrist at Harvard Medical School, Massachusetts General Hospital, and McLean Hospital. “But when incorporating the long-term effectiveness of each treatment, we found that neither treatment is consistently superior to the other.”

“Since CBT and antidepressants are roughly equivalent from a health-economic perspective, other factors should determine what treatment an individual patient receives – and the most important factor is the patient’s values and preferences,” says Kara Zivin, Ph.D., senior author of the new study and a professor of psychiatry at the University of Michigan. Zivin is also a member of the VA Center for Clinical Management Research and U-M Depression Center.

A model of depression treatment

Ross, Zivin and their colleagues built a detailed health economic model of depression treatment, and added data from national clinical trials and sources of cost data.

Their results show that after one year, antidepressants do indeed cost much less, even when taking into account the physician visits needed to monitor treatment.

But after factoring in evidence about depression patients’ frequent need to try multiple medications before finding one that works for them, and their chance of going off their medications due to side effects and suffering a relapse, the balance of cost-effectiveness became more equivocal.

This new analysis adds to the evidence base about cost-effectiveness of two commonly used depression treatments, and could thus guide treatment decisions, Zivin notes, but more research is needed to get updated results about the long-term effects of the two options pitted head-to-head in a real-world setting.

She also notes that the effects of health policy changes in recent years – requiring parity for mental health care for people covered by large private insurers, for instance, or allowing people in rural areas to receive CBT via video chat with a provider – should be measured too.

In the end, though, the shortage of trained mental health providers may do more to govern what kind of treatment patients receive.

Research indicates that the majority of people with depression would prefer to receive therapy instead of medications, but only one-quarter of them actually receive therapy. The Veterans Health Administration, though, has succeeded in increasing the percentage of veterans receiving CBT in recent years.

“Often we think about these calculations in the short term, because insurance coverage is year to year,” Zivin observes. “But if we see effects like these in under five years, perhaps our society will be more willing to bear the upfront costs in order to avoid the indirect costs of missed work and under-productivity later on.”

Zivin is a member of the U-M Depression Center and Institute for Healthcare Policy and Innovation, and has a joint faculty appointment in the U-M School of Public Health and Institute for Social Research. The study’s other authors are Sandeep Vijan, M.D., Erin M. Miller, M.S., and Marcia Valenstein, M.D., all of U-M.

The study was funded by the Department of Veterans Affairs and the National Institute of Mental Health (MH094612).