They work in a bubble of 80-hour work weeks, and 24-hour shifts. They’re caring for patients for the first time, while still learning the ropes of the medical profession. The constant stress wears on their mental health.

But for first-year doctors who started their careers in the past few years, a new study shows that certain political events pierced that bubble of intense training.

In fact, some political events affected their mood just as much as the intense first weeks of their training had. 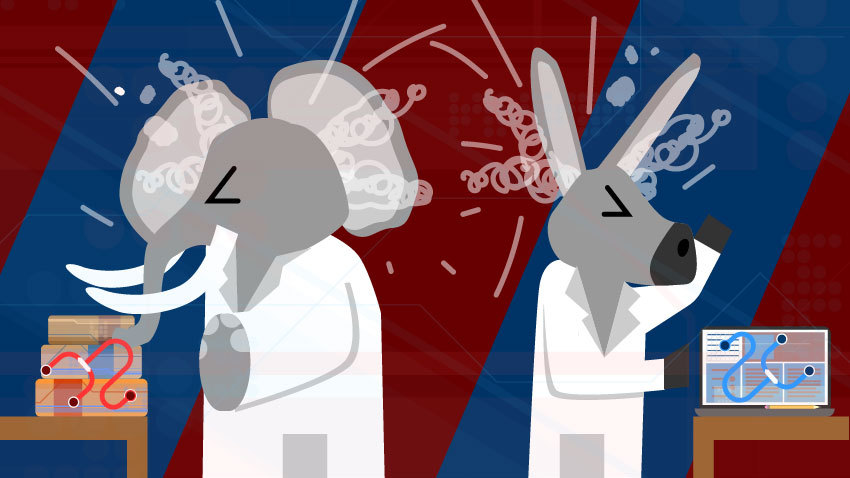 In a paper in the journal BMJ, a team from the University of Michigan reports the results of a real-time, long-term assessment of the moods of young doctors, called interns, in relation to major political and non-political events of the past few years.

The authors call for further exploration of the interactions between politics and medicine, and the implications for physicians and their patients.

The study used data from an ongoing study of intern health that has already yielded findings about the high risk of depression among interns, and the relationship between intense stress and mental health in general.

The new paper focuses on daily mood ratings from 2,345 interns who were in their first year of training at American hospitals anytime between mid-2016 and late 2018, and how they changed in the immediate aftermath of major national and world events.

Three events -- the 2016 U.S. election, the 2017 U.S. presidential inauguration, and the failure of a federal spending bill to fund a Mexican border wall – were followed by the largest collective changes in mood.

The first of these events was actually associated with a drop in mood larger than the drop that interns experienced in the first weeks of their intense training. The second led to a sizable mood drop, while the third led to a collective mood boost.

The authors note in an accompanying commentary, the decline in mood immediately after the election was four times greater than any other day they had tracked, and female interns’ mood drop was twice as large as that seen among male interns. The study group was 55% female, a slightly higher percentage than the current generation of recent medical school graduates.

“This suggests to us that interns were deeply engaged with and affected by the election, even while facing the incredible demands of their intern year,” says Elena Frank, Ph.D., the director of the Intern Health Study. “It also suggests that the 2016 election was experienced as deeply personal and distressing for many young women in medicine.”

Srijan Sen, M.D., Ph.D., the principal investigator of the Intern Health Study and the Eisenberg Professor in the Department of Psychiatry at U-M, said that given the intensity of the intern year’s demands, he had been surprised that any external event managed to affect the moods of interns as much as the study shows.

He recalls that Hurricane Katrina decimated New Orleans and neighboring areas of the Gulf Coast during his own intern year, and he only became aware weeks later.

“The new generation of physicians seems to be more politically engaged than how doctors had traditionally been seen,” he says. “This suggests that there is a real opportunity for physicians to lend their voice and join the discussion on issues relevant to clinicians and their patients.”

Frank, Sen and their colleagues used mood ratings collected daily from interns via a smartphone app used in the study, which asks them to assess their mood each evening. They combined these data with national Google search data about the most searched-for events during the study period.

They note that the strong negative and positive reactions to certain news events may also have to do with the changing demographics of those going into the medical profession – not just more women, but more people of color, and more people from varied socioeconomic backgrounds.

But the question of whether the broader range of backgrounds – and political views – of doctors will translate into more political activism and public expression of views still remains to be seen. Physicians in the past may have refrained from engaging in politics in public ways, to avoid having their political views affect their interactions with patients.

“There has always been a vigorous debate in medicine on whether physicians should engage in politics and to what extent,” says Brahmajee Nallamothu, M.D., M.P.H., a co-author of the study and professor of internal medicine at U-M. “These data suggest deep engagement is happening in young doctors during even their most intense clinical workload.”

The new findings may also add to understanding of how the tumult of the current period may be affecting people who aren’t in the midst of intense medical training.

“Political events may be affecting people’s moods in ways they didn’t before, and we hope our research in general can help illuminate the ways that stress and external events affect mental health,” says Sen.