Troubling Trio: Many with Dementia Take Risky Combinations of Medicines

Despite guidelines, 14% are on three or more drugs that act on the brain and nervous system; families and providers should review prescriptions regularly. 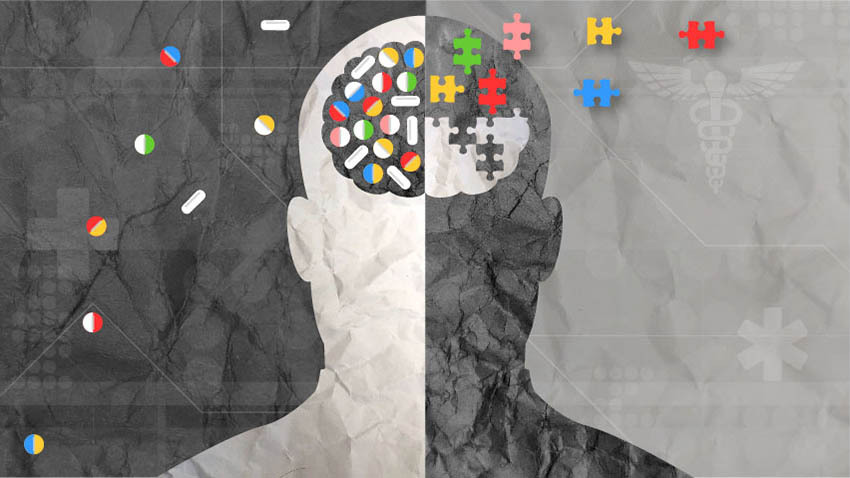 People over 65 shouldn’t take three or more medicines that act on their brain and nervous system, experts strongly warn, because the drugs can interact and raise the risk of everything from falls to overdoses to memory issues.

But a new study finds that 1 in 7 people with dementia who live outside nursing homes are taking at least three of these drugs.

Even if they received the drugs to calm some of dementia’s more troubling behavioral issues, the researchers say, taking them in combination could accelerate their loss of memory and thinking ability, and raise their chance of injury and death.

The new study is published in JAMA by a team led by a University of Michigan geriatric psychiatrist who has studied the issue of medication for dementia-related behaviors for years.

It’s based on data from 1.2 million people with dementia covered by Medicare and focuses on medications such as antidepressants, sedatives used as sleep medications, opioid painkillers, antipsychotics and anti-seizure medications.

More than 831,000 of the entire study population received at least one of the medications at least once during the study period in 2018. More than 535,000 of them — nearly half of all the people with dementia in the study — took one or two of them for more than a month.

But the researchers focused on the 13.9% of the study population who took three or more drugs that act on the central nervous system, and took them for more than a month. They dubbed this “CNS-active polypharmacy.”

That level of use goes beyond the limits recommended by the internationally accepted guidelines called the Beers criteria.

The federal government has long targeted use of these medications in nursing homes, but not in people who live at home or in less-regulated settings like assisted living facilities. “Dementia comes with lots of behavioral issues, from changes in sleep and depression to apathy and withdrawal, and providers, patients and caregivers may naturally seek to address these through medications,” says Donovan Maust, M.D., M.S., the lead author of the study and an associate professor of psychiatry at Michigan Medicine, U-M’s academic medical center.

“But the evidence supporting the use of many of them in people with dementia is pretty thin,” he says, “while there is a lot of evidence about the risks, especially when there are multiple medications layered on top of one another.”

Maust and his colleagues suggest that regular prescription drug reviews could help spot risky combinations, especially ones of three or more drugs that act on the brain and nervous system. Medicare covers such appointments with providers or pharmacists.

“It appears that we have a lot of people on a lot of medications without a very good reason,” he says.

Antipsychotics have received the most attention for their risk to people with dementia, and 47% of those taking three or more of the medications in the study received at least one antipsychotic, most often Seroquel (quetiapine).

Even though such antipsychotics aren’t approved for people with dementia, they’re often prescribed to such patients for agitation and sleep issues, and more, Maust notes.

One drug in that last class, gabapentin, accounted for one-third of all the days of prescription supply that the patients in the study received during the study period.

While gabapentin is approved to treat epilepsy, few of these older adults had a seizure disorder. The vast majority of prescriptions were probably for other reasons because it is commonly prescribed off-label as a pain medication or to help with anxiety, Maust explains.

Another 41% of the people in the three-or-more medication group were taking a benzodiazepine, such as lorazepam (Ativan), often used for anxiety or agitation in people with dementia.

Maust’s past work on benzodiazepine prescribing in older adults focused on long-term use, variation by geographic region, and the effects of national efforts to reduce the use of such drugs because of their risks.

Maust says that providers and caregivers have the right motivation for trying to address dementia-related behaviors through medication: to reduce distress in the patients, and sometimes also in the caregivers.

Often the long-term goal is to make it possible for the person with dementia to avoid having to move to a long-term care facility. The high death toll of people with dementia in such facilities during the COVID-19 pandemic may increase that motivation, he notes.

And the lack of information for clinicians on the use of these drugs in dementia makes every prescription a judgment call.

But it’s important to know that prescribing a medication combination that might be safe in younger people can be dangerous in older ones. Those with reduced cognitive abilities may be especially sensitive to potential risks. The changes in brain chemistry and response to medication that come with age and with dementia alter the reaction to these drug combinations.

For instance, opioid pain medications already come with a black-box warning against combining them with other drugs that affect the central nervous system, for any user. But these combinations can be especially risky in older adults. Yet 32% of the people in the study group were taking an opioid, most often hydrocodone.

Even as people with dementia receive drugs that act on their central nervous system for behavioral reasons, those same drugs may hasten their cognitive decline. For instance, a clinical trial of the antidepressant citalopram (Celexa) as a way to treat dementia-related agitation showed that in just nine weeks, participants lost a measurable portion of their cognitive ability.

“It’s important for family members and providers to communicate often about what symptoms are happening, and what might be done with non-medication interventions such as physical therapy or sleep hygiene, as well as medications, to address them,” Maust says. “Talk about what medications the patient is on, why they’re on each one, and whether it might be worthwhile to try tapering some of them because the symptom that prompted the prescription originally might have waned over time.”

In some cases, the medications may even be prescribed in response to the distress that a caregiver feels when seeing their loved one behave in a certain way. Connecting caregivers with resources through nonprofit organizations, or their local Area Agency on Aging, could help them support their loved ones better.

In addition to Maust, who is a member of the U-M Institute for Healthcare Policy and Innovation and the VA Center for Clinical Management Research, the study was performed by a team that includes IHPI members and staff Myra Kim, Sc.D., M.A., Julie Bynum, M.D., Kenneth Langa, M.D., Ph.D., Chiang-Hua Chang, Ph.D., Kara Zivin, Ph.D.  and Erica Solway, Ph.D., former U-M psychiatry professor Helen Kales, M.D., now at the University of California-Davis, and senior author Stephen Marcus, Ph.D. of the University of Pennsylvania.

The study was supported by a grant from the National Institute on Aging (AG056407).

Paper cited: “Prevalence of Central Nervous System–Active Polypharmacy Among Older Adults with Dementia in the US,” JAMA. DOI:10.1001/jama.2021.1195