Kathy and Julie both thought they had exhausted options to treat their sons’ medication-resistant psychiatric conditions. Then they discovered ECT. 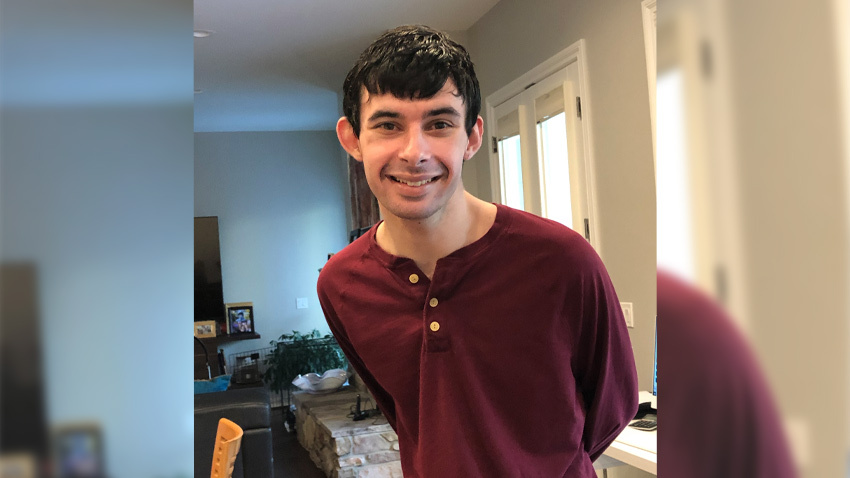 George, 22. Photo courtesy of the family.

Peter, 24, and George, 22, each encountered numerous challenges before most children are old enough to attend preschool.

Peter, born with Down syndrome, began throwing and spinning items as a toddler. He was eventually diagnosed with autism, in addition to mild cerebral palsy, epilepsy and agitated catatonia. George was diagnosed with autism when he was 18 months old. He has limited language capacity and over time developed a habit of hitting himself.

Both young men were put on a variety of medications, few of which offered any relief – until, when Peter was a teenager and George was 20, they began electroconvulsive therapy, or ECT.

ECT as an option

“Peter was aggressive as a child, and all psychiatric drugs had failed. It was his catatonia that led us to give ECT a try,” said Kathy, Peter’s mother. Kathy took Peter to see Neera Ghaziuddin, M.D., professor of psychiatry, who specializes in catatonia and mood disorders in adolescents, and Ghaziuddin suggested the option.

Kathy, who used to work in medical research, but is now her son’s full-time caregiver, acknowledged that ECT was a last resort.

“Peter had lost 30 pounds, he was emaciated. After the first few ECT treatments, we saw a profound improvement in his demeanor,” Kathy said. “His life was saved because of the ECT.”

“He was a happy-go-lucky child, but he’s severely autistic and catatonic,” said his mother, Julie. “He has limited language capacity, isn’t able to tell others how he feels, but he’s always been happy. Then a few years ago, George started crying non-stop and hitting himself in the head really hard. I didn’t know what was wrong or how to help him.”

Julie, a single mom, was living in Florida at the time, but moved back to Michigan, where she was originally from and where the two have a large support system of friends and family.

In Michigan, George began seeing Sarah Mohiuddin, M.D., in the department of psychiatry’s Autism Spectrum Disorders Clinic. Mohiuddin suspected that George, like Peter, suffered from catatonia, a behavioral syndrome marked by an inability to move normally, often associated with mental illnesses, and she suggested ECT.

“I was desperate, nothing was helping George,” said Julie. “We started ECT treatments two years ago. From the first treatment on, I saw a huge improvement in George. I’m so grateful to Dr. Mohiuddin for suggesting this treatment - simply put, it saved his life.”

ECT: Disrupting the Stigma Around An Essential Treatment Option

ECT improvements and side effects

Due to his severe and medication resistant condition, Peter has received maintenance ECT over the past eight years. He’s shown many improvements: he’s much more calm, not manic, and is pleasant and can engage in family activities.

“We can go out in public and don’t have to worry about him turning around and hitting someone,” said Kathy. “ECT treatments have also stabilized his weight, and he gained back some weight he’d lost.”

While ECT keeps Peter stabilized, “patients with multiple severe developmental disabilities, like Peter, will often require a longer term maintenance ECT course,” said Dr. Ghaziuddin. He’s also experienced several side effects. “Early on in the ECT course, Peter did lose some language skills, he had garbled speech, and his personality became flat. It took a while to come back,” said Kathy. “But once you commit to doing ECT, you have to go forward. And for Peter, it was the only solution out there. And the side effects don’t outweigh the benefits.”

ECT led George to have more awareness, and his outbursts of hitting himself have decreased. “George loves to go for his treatments,” said Julie. “When the last treatment has been a certain time in the past, he will ask to go in because he doesn’t feel well. He knows it helps him.” As for side effects, “he isn’t 100% back to where he was before, but the treatments saved his life,” she said. “For George, ECT wasn’t a choice, it was a necessity. I wasn’t scared of it; I was just so desperate. Doing nothing was not an option.”

Having to isolate during the height of the pandemic resulted in negative ramifications for Peter. The two support workers he relied on from Community Mental Health services couldn’t come to his house anymore, and he struggled with remote learning. His ECT treatment regimen was also impacted: due to COVID-19 protocols, he went from a treatment every eight days to receiving treatments at a 16-day interval.

“The impact of the pandemic was horrific,” said Kathy. “We had to wait 18 days before Peter was allowed back into the hospital, and it took the rest of the summer of 2020 to recover. ECT is not an option like elective surgery. It is a life-saving treatment that should not be put on pause.”

George’s treatment schedule was also impacted. “George was not able to get regular ECT treatments during the height of the pandemic, but he still got some treatment – just a reduced quantity,” said Julie. “We were more scared not to have a treatment than we were of getting the virus because of being in the hospital.”

“We have nothing to be ashamed of”

Both women credit the ECT care team as much as they do the treatment.

“The ECT team is a fantastic TEAM; they’re unbelievable,” said Julie. “They care so much about the patients – they’re not just doing a job. One of the patient care staff noticed cataracts in George’s eye. He was blind in one eye and had torn retinas because he’d been hitting himself so hard for so long. A personal care assistant always goes into the treatment room and holds George’s hand. I can tell that for her, my son is not ‘just another patient.’”

They also hope to help erase some of the stigma around ECT and mental health in general. “ECT is not barbaric. It saved my son’s life, and it continues to help him,” said Julie. “I’m so very grateful for this treatment.”

“I’m happy to be a cheerleader for ECT,” says Kathy. “Shock therapy is not the old thing that it once was. It can be a very effective treatment for severe mental conditions and it is non-traumatizing for the patient. We have nothing to be ashamed of. It is important that families are aware of the options that are available for children with developmental disabilities. I hope stories like my family’s will help with stigma and will motivate others to seek help.”

For those interested in reading and learning more about ECT, Kathy recommends the books  Shock: The Healing Power of Electroconvulsive Therapy by Kitty Dukakis and Each Day I Like It Better: Autism, ECT, and the Treatment of Our Most Impaired Children by Amy S. F. Lutz.

This article first appeared on the Michigan Health website.