This story originally appeared in The University Record, as a Staff Spotlight.

“I was Forrest Gump,” she joked.

She would like nothing more than to get back into running, but while the desire and determination to do so are there, the opportunities are not.

Much of Miltimore’s time these days — and most days for the past 19 years — is consumed by caring for her special-needs son. It’s been a rewarding challenge fraught with setbacks, successes and stress.

She unpacked all of it in “A Zebra in a Field of Horses: One Parent’s Candid Truth About Raising a Child with Special Needs,” a book released in 2015 that chronicles what life was like raising her autistic son, Liam, how it affected her daughter, Mira, and what it did to her marriage. 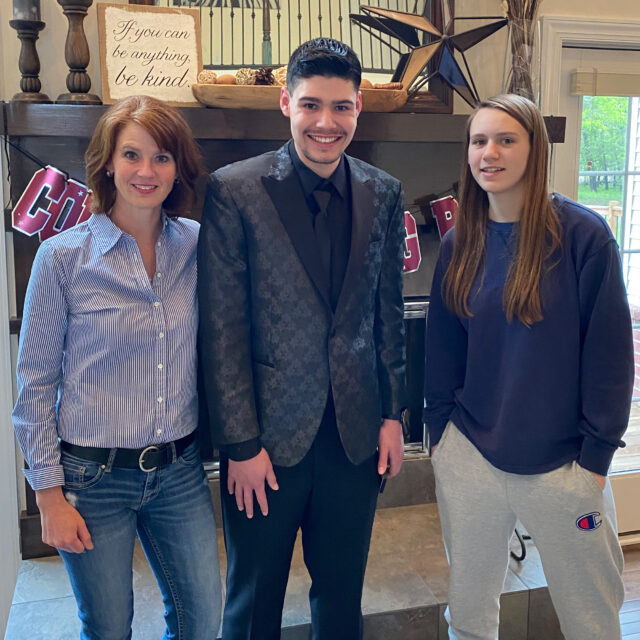 Kelly Miltimore, a registered nurse who works in the Central Staffing Resources at Michigan Medicine, stands next to her son, Liam, and daughter, Mira. (Courtesy of Kelly Miltimore)

“It was so easy to write because it was literally telling what happened and saying to others going through it, ‘You’re not alone, it’s horrible and awful and amazing and made me the best version of myself,’” said Miltimore, a registered nurse who works in the Central Staffing Resources at Michigan Medicine.

“It’s been awful, but you just acclimate.”

Much of the inspiration to write the book came from the frustration and isolation Miltimore felt while trying to find appropriate services to help Liam during his frequent violent and self-harming episodes.

When Liam was 10 and in the throes of a particularly ugly episode — “He was actively aggressive, hitting, suicidal, self-harming, telling me he was going to kill me, just psychotic.” — she had difficulty getting him admitted to the hospital.

Miltimore’s sister, a therapist, made a desperate plea on Facebook to ask for help for Liam, and the result was about 100 messages the next day sent to Miltimore.

“So then it was, this is our truth, we are looking for a psychiatric bed and my son is really sick,” she said. “That was kind of like the moment of not hiding anymore. That took off the armor I had on.”

Liam ended up staying at the Ann & Robert H. Lurie Children’s Hospital of Chicago for more than three weeks while Miltimore stayed at the Ronald McDonald House there.

“(My daughter) had such bad separation anxiety from me because Liam’s not doing well and all of a sudden Mom is in Chicago for 23 days,” she said.

Miltimore said that over the past eight years, Liam has spent 30 weeks total in a hospital. That includes an 11-week stay at a temporary medical residential facility in Austin, Texas, following an episode during which he put his foot through a double-pane window when he could not find his laptop.

The scariest episode happened three years ago on St. Patrick’s Day when Liam fell unresponsive while at a Meijer store with his father, Miltimore’s ex-husband.

“It was the worst phone call that I had been waiting to get,” she said. “It’s like, this is the moment, this is it.”

After Liam was taken to Providence Park Hospital in Novi, Miltimore convinced the attending doctor to have him flown to U-M Hospital. Knowing Liam’s fascination with Survival Flight helicopters, a tearful Miltimore took pictures of her son being loaded in to show him.

“I was yelling at him to wake up so he could see the helicopter,” she said. “I was beside myself.”

Liam made it through the epileptic episode. The ordeal happened after the book was published, and Miltimore said she has written five additional chapters since 2015 with updates since the book came out.

Her experiences with Liam opened the door to her current career. After trying a multitude of medications and therapies, Miltimore brought Liam to Michigan Medicine to look into electroconvulsive therapy.

Liam ended up having more than 300 sessions, so Miltimore became close with the staff. Knowing she had a medical background from her nursing degree at Michigan State University and previous work at C.S. Mott Children’s Hospital from 1997 to 2003, staff members encouraged her to meet the manager of the adult inpatient psychiatric unit at Michigan Medicine while Liam was in recovery during one session. She was offered and accepted a position.

She works in the psychiatric cluster at Central Staffing Resources, floating between the adult unit, pediatric unit and psychiatric emergency services. After always wanting to be a pediatrician and work with children, she’s found being involved with the adults at CSR to be particularly rewarding.

“I have this drive to fight for this population because I know how hard it was for us to get services when Liam was a cute kid.”

Liam is 19 and works as a busboy at a Milford restaurant, while Mira is 15 and is excelling at Milford High School. Miltimore remarried five years ago and welcomed her husband’s two children into their lives.

One day she imagines she’ll be able to go on those long runs again, and in the meantime she steals time tending to her garden and enjoying aromatherapy to relax. She hopes to also one day advocate for a stronger relationship and understanding between special-needs children, parents and providers — the perfect triad, as she calls it.

Despite how difficult the years were to bring Liam into adulthood, she now feels somewhat comfortable taking a peek at what the future holds.

“I think it’s brighter than I ever thought it would be,” she said. “I don’t think I’ve ever let myself look too far into the future before because it literally was hour to hour, sometimes minute to minute.

“I’m finally hopeful. I can say I’m hopeful and not be afraid to say that.”