His appointment, pending approval by the Board of Regents on Dec. 9, is being recommended by Susan M. Collins, provost and executive vice president for academic affairs. 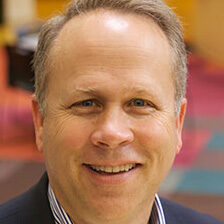 Himle will step in for Lynn Videka, who will step down Dec. 31 after serving as dean since 2016. She plans to take a leave in January 2022 and then return to the faculty.

“Professor Himle is a distinguished scholar and educator with years of experience as a faculty member and an administrator,” Collins said in recommending the appointment. “He has a long and distinguished record of service to the university and the social work community. I am confident that the school will maintain its momentum during this interim period.”

“It is an honor to serve as interim dean of the School of Social Work. The school has thrived under the stellar leadership of Dean Lynn Videka and I look forward to leading the school until a permanent dean is appointed,” Himle said. “The School of Social Work has tremendous faculty, students and staff who will all join together to guide the school during this transition period.”

In 1987, Himle joined SSW as a field instructor and adjunct lecturer, positions he held until 2005. Additionally, he held several clinical and administrative posts in the Department of Psychiatry from 1986 to 2005. Himle then rose to assistant professor in social work and psychiatry in 2005.

Himle has held numerous academic administrative appointments, notably as associate dean for research from 2015-17 and associate dean for faculty affairs from 2018 to the present in SSW. He is a licensed clinical and macro social worker in the state of Michigan.

Other funding agencies include the Michigan Health Endowment Fund, U-M Poverty Solutions, U-M Depression Center, Children’s Hospital of Michigan Foundation and the Health Resources and Services Administration. His research has yielded more than 150 publications over his career.

Himle earned a Bachelor of Arts degree in psychology, a Master of Social Work degree in interpersonal practice, and a Ph.D. in social work and psychology, all from U-M. He completed an internship in the anxiety disorders program in the Department of Psychiatry in 1983-84.

Collins appointed a 13-member advisory committee in April to aid in the search for the next dean of the school. She asked members of the advisory committee to conduct a broad search and then submit an unranked slate of candidates.

View the original article on the University Record site.