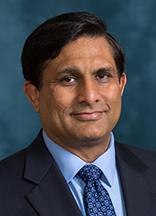 Dr. Shah collaborates with medical students, residents and fellows to develop their academic careers, and has received the Teacher of the Year Award from the radiology residents at the University of Michigan. He is frequently an invited guest speaker at academic institutions and national/international meetings.

Dr. Shah’s clinical and research interests focuses on functional MRI and advanced MRI applications in neuroradiology. He is also conducting clinical trials on MR contrast media and in Alzheimer’s disease, including contrast quality and safety and efficacy trials for new drugs for Alzheimer’s disease.