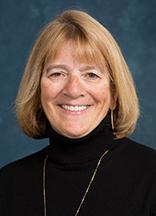 Before joining the University of Michigan in 2009, Dr. Sebolt-Leopold was the executive director of the Mechanistic and Target Biology Department at Pfizer Global R&D in Ann Arbor, where she led a group of over 100 scientists dedicated to early stage drug discovery activities, encompassing molecular pharmacology, assay development, and biomarker validation.

Dr. Sebolt-Leopold’s team was recruited by the Center for Molecular Imaging as part of an effort to design and develop small molecules to be used for the early diagnosis of cancer. The therapeutic inhibition of protein kinases has revolutionized the treatment of certain cancers—their diversity and role in cell signaling makes them attractive targets for drug design, and the ability to non-invasively diagnose and molecularly define an individual’s tumor will enable the development of personalized therapies.

MEK is a critical component of the RAS-MAP kinase signaling pathway, which is activated in a large percentage of cancers. Dr. Sebolt-Leopold co-chaired the project team that was the first in the pharmaceutical industry to design, synthesize and advance a small molecule MEK kinase inhibitor into the clinic.

Dr. Sebolt-Leopold has led multiple cross-disciplinary research teams, resulting in the advancement of clinical candidates, including the MEK inhibitors CI-1040 and PD0325901. These agents entered the clinical arena based on their promising activity in preclinical models, where they effectively block RAS onogenic signaling.

The Sebolt-Leopold lab’s success in championing the anticancer drug potential of MEK inhibitors is reflected in the number of pharmaceutical companies subsequently launching research programs around the CI-1040/PD0325901 template. Consequently, there are nearly a dozen MEK inhibitors currently undergoing clinical evaluation.