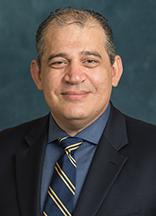 Dr. Al-Hawary was born and raised in Beirut, Lebanon. He completed his medical school and radiology residency training at the American University of Beirut (AUB), Beirut, Lebanon.  He then completed his fellowship training in Body Imaging at the University of Michigan and joined the faculty since. He has published multiple peer-reviewed papers in IBD and pancreatic cancer imaging. He is involved in multiple national organizations including the American Board of Radiology, the Radiologic society of North America, the American gastroenterology association (AGA) institute council and the American College of Radiology.  His primary clinical interests include Small and large bowel diseases as well as benign and malignant pancreatic diseases.