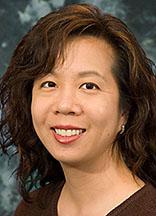 June Chan MD graduated from McGill University with a degree in Honors Physiology in 1991. She then attended Albany Medical College, where she was a member of the Alpha Omega Alpha society in her 3rd year. She completed her Internship training at St. Joseph Mercy Hospital in Ann Arbor, then went on to do her residency training in Radiation Oncology at the University of Michigan, where she was Chief Resident during her final year.

As junior faculty, she was awarded an NIH grant to study the use of complementary medicines in cancer patients and has published papers in the International Journal of Radiation Oncology Biology Physics, and the Journal of Clinical Oncology. Since completing her residency, she has remained on faculty in the Department of Radiation Oncology at the University of Michigan, practicing at our Providence Park Hospital affiliate. Dr. Chan treats a variety of disease sites including cancers of the breast, lung, head and neck, GI system and brain.