Ljungman Laboratory: Early-stage cancer drug projects receive pilot grants to help them advance from the bench toward the bedside. 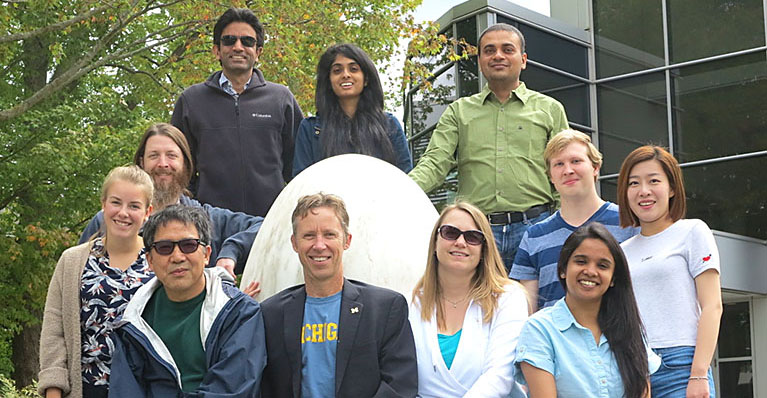 Turning off the RNA garbage disposal

In cells, there’s a protein complex called the RNA exosome that breaks down and gets rid of broken and unneeded RNA.

Cancer cells are especially reliant on a well-functioning RNA exosome because they produce an abundance of mis-spliced transcripts during their rapid proliferation, says Mats Ljungman, Ph.D., a professor of radiation oncology in the Medical School and of environmental health sciences at the School of Public Health.

“The basic idea is that if we can shut down this garbage disposal, the cancer cells will drown in their own garbage,” he says.

Ljungman and collaborator Nouri Neamati, Ph.D., the John G. Searle Professor of Medicinal Chemistry at the College of Pharmacy, recently received a $70,000 grant to conduct high-throughput screening at the U-M Life Sciences Institute’s Center for Chemical Genomics to find small molecules that can shut down the RNA exosome.

They previously discovered two classes of compounds that can inhibit the RNA exosome. They’ll use this grant to screen for additional inhibitors that are more selective and have better properties for ultimately being developed into a drug.

Saurabh Agarwal, Ph.D., a research scientist in the Ljungman lab, developed a process to screen for new RNA exosome inhibitors in a fast, efficient manner.

And while the prospect of a potential therapeutic target is exciting, a successful inhibitor could also help scientists learn more about how the RNA exosome functions.

“Even if we’re not ultimately able to make a drug that is safe and effective in people, these compounds could still be useful reagents for studying RNA turnover and RNA biology — which would be a huge boost for the whole field,” Ljungman says.