The Functional Imaging Group in the Department of Radiation Oncology at the University of Michigan was established in 2003.

Metabolic and physiological imaging has been demonstrated as a means to customize radiation therapy (RT) based on an individual patient's prognosis or early response to treatment. However, clinical utilization is challenging due to issues such as quantification and reproducibility of physiological images, heterogeneity of the image parameters in the tumor, and lack of quantitative and automated tools to derive meaningful metrics to support clinical decision making. In addition, radiation sensitivity of normal tissue function that is at risk for damage varies from patient to patient. Assessing individual patient sensitivity to radiation using physiological imaging allows us to select patients for intensified treatment to improve outcomes while preventing organ injury. Overall goals of our group are to develop and validate quantitative functional and metabolic imaging models and methods for physiological adaptation of radiation therapy based upon early assessment and prediction of tumor and normal tissue function response to treatment. Also, we develop and optimize MRI techniques for using MRI as a sole imaging modality for RT planning.

imaging studies considered a tumor as a uniform entity by using a mean value of a physiological imaging parameter to depict the whole tumor. This approach ignores heterogeneity of the tumor pathophysiology and biology. It is plausible that heterogeneity within a tumor is responsible for observed heterogeneous tumor responses to treatment. This motivates investigations of tumor voxel-level changes longitudinally, such as from pre to after starting therapy. However, reliably determining voxel-to-voxel changes from a pair of image volumes acquired over a period depends on the voxel-level accuracy of image registration, which is a very challenging task when a tumor volume grows or shrinks over the period of follow-up. Errors in deformable image registration have a great impact on the analysis of voxel-to-voxel changes due to therapy or tumor growth. We have been developing an alternative approach that extracts an aggressive subvolume of the tumor from its heterogeneously-distributed physiological imaging parameters and assess its change after starting therapy for prediction of treatment response and outcomes (Figure 1). Our model extracts the “feature” subvolumes for therapy assessment by analyzing the imaging parameters in the feature space. Finally, to spatially guide adaptive RT, the prognostic or predictive subvolume of the tumor is required to be highly associated with the site for tumor recurrence/failure. We have been developing and validating our models in three cancer types, namely, head-and-neck cancer, brain metastasis, and intrahepatic cancer. 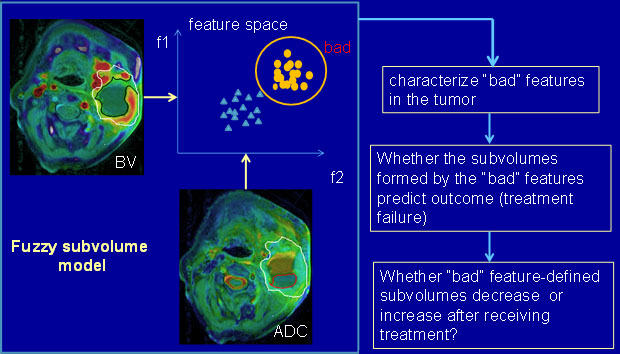 Superior multiple contrasts for soft tissue and lesion characterization have made MRI to be considered as a primary imaging modality for radiation therapy (RT) treatment planning and guidance. Currently, MRI is recommended for target delineation in many forms of precise radiation treatment. In addition, MRI can provide physiological and metabolic information for evaluating and characterizing tumors and normal tissues, and their responses to radiation therapy, and for defining the radiation boost target.. However, MRI technologies have to address several challenges in order to be used as a primary imaging modality for RT planning and guidance. One is geometric accuracy required for precision RT planning. Another is that MRI does not provide electron density information that is required for RT planning. This NIH funded project, co-led by Drs Balter and Cao, aims to develop methods to create synthetic CT from MR images (Figure 2), to reconstruct undistorted MR images (Figures 3 and 4), and/or to monitor the quality of MRI geometry accuracy in individual patients. 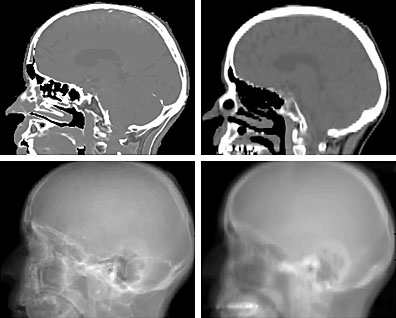 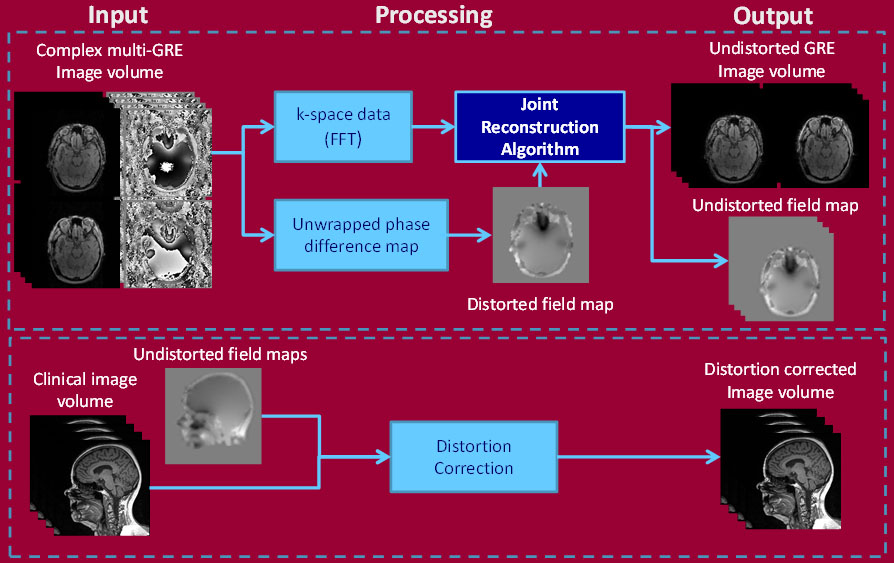 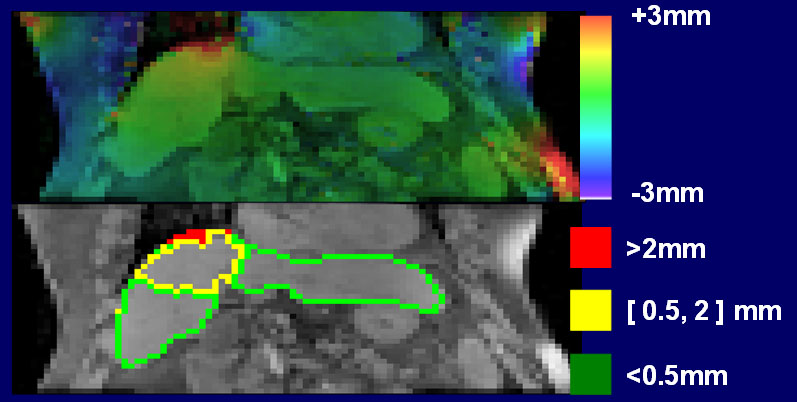 Figure 4. Illustration of geometric distortion in the liver MRI.

RT is a major treatment modality for malignant and benign brain tumors. The major limiting factor is radiation-induced neurotoxicity. This neurotoxicity manifests as late neurological sequelae and neurocognitive dysfunction with or without gross tissue necrosis. Late neurocognitive dysfunction presents as diminishing mental capacity for working memory, learning ability, executive function, and attention. The potential effect of RT on neurocognitive outcomes is an important factor in the determination of the risks versus benefits of treatment, which should be an integral part of clinical decision-making. Our primary goal of this NIH funded project is to develop quantitative functional imaging biomarkers for early assessment of individual sensitivity to radiation and prediction of late neurotoxicity. Quantitative functional imaging biomarkers have the potential to identify critical functional anatomic structures that are relevant to delayed and late cognitive function declines (Figure 5).Such quantitative imaging biomarkers might provide an opportunity to individualize the dose of RT and support neuroprotective therapy. Our on-going imaging studies of patients undergoing partial brain RT have showed that early changes in vascular and WM properties assessed by DCE and DT MRI correlated with delayed changes in memory and learning functions. Also, we will test and validate the clinical value of these quantitative imaging metrics for assessing cerebral vascular and tissue injury and predicting neurocognitve function declines in patients with brain metastases undergoing WBRT. 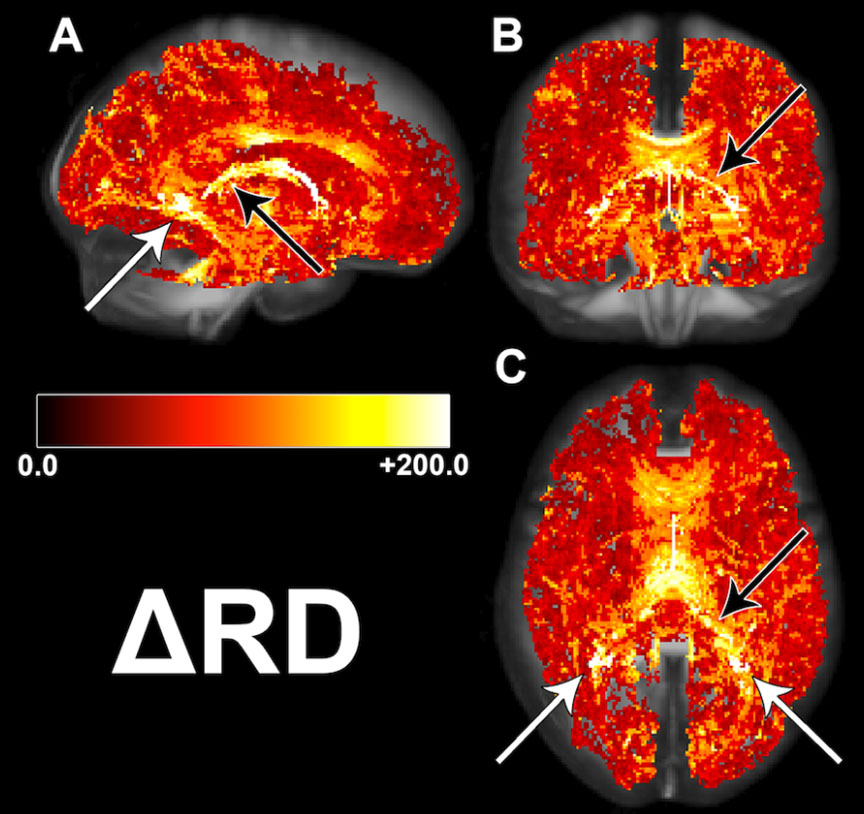 Figure 5. Illustration of radial diffusivity changes in the brain of patients who received whole brain radiation therapy for brain metastases. White arrows point the great changes observed in fonix and cingulum that are interconnected with the hippocampus.

Our clinical trials have showed that high dose conformal radiation therapy to intrahepatic cancers seems to lead to better tumor local control. However, attempts to increase radiation doses are limited by the development of radiation-induced liver disease (RILD). In the past, efforts to develop models to estimate the likelihood of developing RILD have been based primarily on the planned radiation dose distribution in the normal liver. While these models have permitted the safe delivery of far higher doses of radiation than have previously been possible, they also suggest that there is a broad range of individual patient sensitivity that is not reflected by predictions made solely based on the physical dose distribution or general clinical features. If individual patient sensitivity could be better estimated before or during a course of treatment, it would permit higher doses of radiation to be delivered safely to the tumors of patients whose liver is relatively radiation resistant, thus prolonging survival without increasing complications. In this NIH funded project,we aim to develop, test and validate hepatic perfusion and functional imaging models to predict liver function outcomes based upon individual patient response to radiation doses assessed at the mid-course of RT. Also, Drs. Matuszak and Feng are exploring to use these images to redistribute radiation doses to maximize individual benefits of tumor control and minimize liver injury risks (Figure 6). 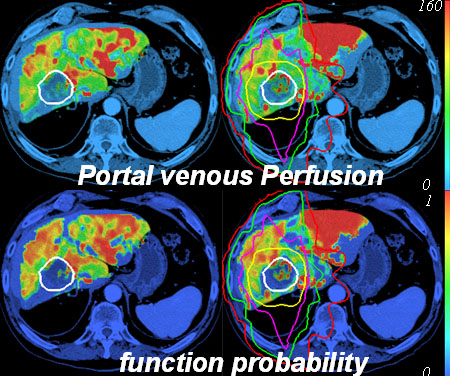 This project aims to address lack of quantitative and automated imaging tools to support therapy modification using metabolic and physiological imaging in HN cancers. We have developed and investigated fuzzy logic pattern recognition techniques for identifying poorly perfused subvolumes of head-and-neck (HN) cancer from heterogeneous distributions of tumor blood volume (BV) across patients and over multiple time points. Based on our findings that large poorly-perfused subvolumes of HN tumors before treatment that persist during the early course of chemo-RT have the potential to predict local failure better than the change in the mean BV in the tumor, we will further develop the subvolume definition method, extend it to diffusion-weighted (DW) MR imaging, and evaluate and validate it in a randomized phase II clinical trial of poor-prognosis HN cancers. Our aims are: (1) Develop quantitative and automated methods to extract significant subvolumes of HN tumors from dynamic contrast enhanced (DCE) and DW MRI for prediction of local and regional failure; (2) Prospectively assess variability and reproducibility of the subvolume intensity and definition extracted by our methods using test-retest data; and (3) Prospectively evaluate and validate that the method yields subvolumes predictive of local-regional failure in a randomized phase II trial of radiation dose boosting for poor-prognosis HN cancer. This project is funded by NCI QIN. 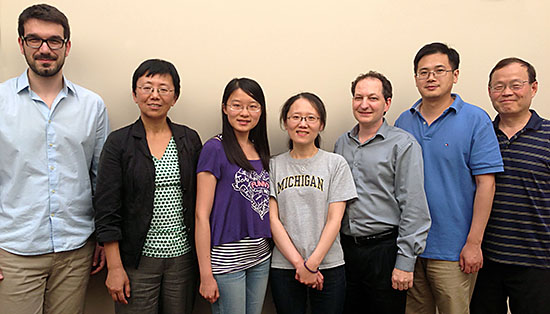 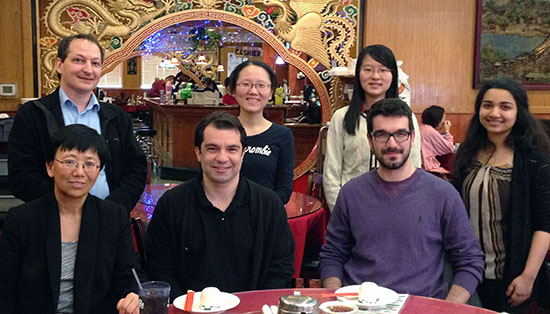 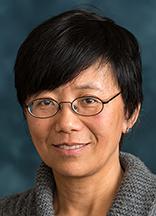