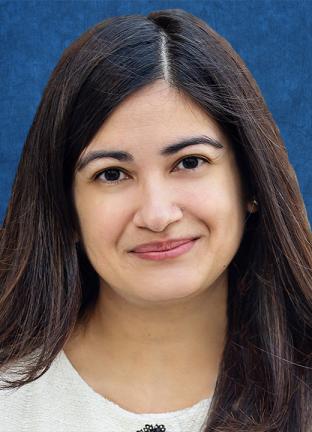 Reshma Jagsi, M.D., D.Phil., is Newman Family Professor and Deputy Chair in the Department of Radiation Oncology and Director of the Center for Bioethics and Social Sciences in Medicine at the University of Michigan.

She graduated first in her class from Harvard College and then pursued her medical training at Harvard Medical School. She also served as a fellow in the Center for Ethics at Harvard University and completed her doctorate in Social Policy at Oxford University as a Marshall Scholar.

An internationally recognized clinical trialist and health services researcher, Dr. Jagsi’s medical research focuses on improving the quality of care received by breast cancer patients, both by advancing the ways in which breast cancer is treated with radiation and by advancing the understanding of patient decision-making, cost, and access to appropriate care. Her research in this area is funded by an NIH R01 grant to evaluate an intervention to help support women with breast cancer and their physicians to make high quality decisions. She is also supported by the Susan G. Komen Foundation to lead research on inflammatory breast cancer and innovative radiotherapy approaches to intensify treatment in that setting. She led the national IDEA trial to investigate approaches for radiation treatment de-escalation among patients with biologically favorable breast cancer, and she is active in the National Cancer Institute's cooperative groups, including SWOG and NRG. She also serves on the NCI's BOLD task force on locoregional management of breast cancer.

A substantial focus of her research considers issues of bioethics and gender equity in academic medicine. Her investigations of women’s under-representation in senior positions in academic medicine and the mechanisms that must be targeted to promote equity have been funded by an NIH R01 grant and grants from the Robert Wood Johnson Foundation, AMA, and other philanthropic funders. She leads the national program evaluation for the Doris Duke Charitable Foundation's Fund to Retain Clinician Scientists, a large national intervention that was inspired in part by her own research. She also leads an NIH R01-funded investigation using deliberative democratic approaches to illuminate patients’ attitudes towards secondary use of data collected in routine clinical encounters and a current Greenwall Foundation-funded investigation of patient attitudes towards approaches used by hospitals to encourage donations from grateful patients.

Active in organized medicine, she has served on the Steering Committee of the AAMC's Group on Women in Medicine in Science and now serves on the Board of Directors of the American Society of Clinical Oncology. She was part of the Lancet’s advisory committee for its theme issue on women in science, medicine, and global health.

Dr. Jagsi's work is frequently featured in the popular media, including coverage by the New York Times, Wall Street Journal, Washington Post, NPR, and national network nightly news. Frequently invited as a keynote speaker, she has delivered invited talks at over 50 institutions and professional societies, including the AAMC, the NIH, and the National Academy of Medicine and National Academy of Sciences. Her contributions have been recognized with her election to the American Society of Clinical Investigation and the Leadership Award of the AAMC’s Group on Women in Medicine and Science. She has been elected fellow of ASTRO, ASCO, AAWR, and the Hastings Center.

Selected from over 300 Publications