When Guidelines Are Not Enough: Behind Motivations for Inguinal Hernia Treatment Approaches 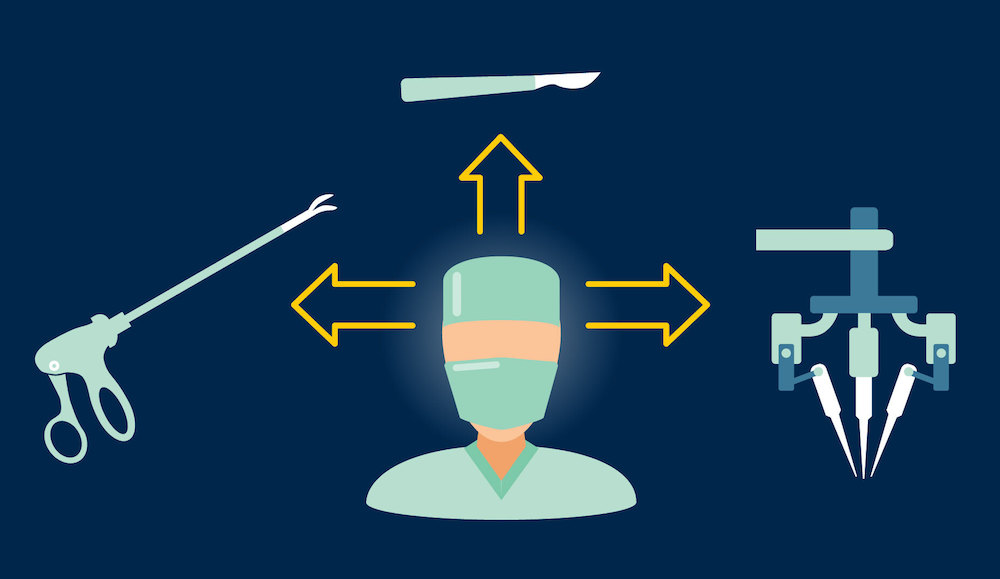 The “what”—surgeons deviating from established practice guidelines for managing inguinal hernias—had been teased out in a previous study: A team of other Michigan Medicine surgeons and health policy researchers found during a review of claims data that only 42% of surgeons offered minimally invasive surgery to patients with inguinal hernias for whom the guidelines indicated such an approach.

Clearly just having guidelines wasn’t enough, so the “why” behind the decision-making demanded exploration.

Anne P. Ehlers, MD, MPH, Assistant Professor of Surgery at Michigan Medicine, is part of a team that found that personal preference, a desire for autonomy, and access to resources largely informed how surgeons chose treatment approaches, and sometimes deviated from practice guidelines. The findings were published in JAMA Network Open.

Guidelines existing not enough, even when cases are clear-cut

The overarching goal of understanding the motivations for making certain treatment decisions for inguinal hernias was simple:

“To make sure that those patients who would benefit most from one particular technique over the other are referred and seen by surgeons who can offer that technique,” Ehlers says.

A minimally invasive approach is recommended for bilateral inguinal hernias because it’s less surgery; a robotic or laparoscopic repair can fix both hernias at once, where an open approach requires staging the procedures. Patients with recurrent inguinal hernias previously fixed via open approach will benefit from a minimally invasive approach because the tissue planes remain undisturbed.

Ehlers says that even accounting for exceptions and individual patient characteristics, the deviation rate from standards is high.

“They aren’t going to be followed in a hundred percent of cases because you have to make a decision based on a clinical scenario but we see they are followed much less often than we think,” Ehlers says.

This, even when the management of these kinds of hernias is pretty straightforward; unlike a cancer case, the pathway to a treatment plan is less complex.

Many motivations for choosing approaches

Ehlers and her colleagues analyzed interviews from 21 practicing surgeons recruited from the Michigan Surgical Quality Collaborative.

The surgeons had been presented with a clinical vignette featuring a 24-year-old male patient with a primary unilateral inguinal hernia and talked through their rationale for choosing one approach over another.

Personal preference and a desire for decision-making autonomy, drove many surgeons’ hypothetical choices for patients. Some simply stated that they preferred a particular approach, which may or may not have aligned with guidelines. While acknowledging guidelines, they appeared to sometimes cherry-pick evidence to support their preference, or disregard evidence as low-quality.

“It’s something that you see in every single field. It speaks to a lot of the heuristics and biases that everyone has. They take information that fits their narrative and belief and discard the rest of it,” Ehlers says.

While data may never completely overcome biases, Ehlers sees an opportunity to chip away at gaps in data that may be driving some of the skepticism.

“Part of it is recognizing that it’s a problem in the first place. Surgeons don't think that there’s good enough data, so what is the data that needs to be generated to definitively answer this question?” Ehlers says.

Surgeons also cited access to minimally invasive technologies as a factor in their decision-making. The lack of a robot for performing minimally invasive surgery was a notable reason surgeons would revert to their otherwise favored approach rather than what guidelines recommended.

That pivot is problematic to Ehlers because it highlighted the lack of a stepwise progression; some surgeons said they’d do an open repair rather than laparoscopic if the robot wasn’t available, seemingly skipping a minimally invasive option for an invasive one.

“For the standard first-time inguinal hernia repair, many people may choose to use the robot because they like to use the robot for that and it’s a fun operation to do. I bet the same surgeons’ capable hands could perform as good of an operation laparoscopically,” Ehlers says.

The third major bucket of motivating factors, patient characteristics with regard to overall health, hernia type, was reassuring for Ehlers. When considering these characteristics, their approaches tended to agree with guidelines.

“Most surgeons did say that if a patient can’t tolerate general anesthesia, they’d choose an open approach, for example. They did appropriately use patient characteristics,” Ehlers says.

Patient characteristics such as overall health, hernia characteristics, and type of repair for recurrent hernias informed the choice of approach. In some circumstances, surgeons also mentioned patient preference as another factor that motivated their choice. This could lead to a guideline-concordant approach or not; if a surgeon could find a way to justify a preferred approach over a recommended one, they could.

From the “what” and the “why,” some potential “what nexts”

If deviation from standards is sometimes due to the lack of a stepwise approach, potential interventions would be deliberate.

Ehlers see an opportunity to guide surgeons through the management process with a data-driven tool.

“For some of these simpler diseases, where you’re not thinking about a lot of different variables, something as simple as a clinical algorithm could work. Say you have a patient with an inguinal hernia...is it bilateral? Yes? Then the algorithm would tell you they should see a surgeon that does minimally invasive surgery, for example,” Ehlers says.

One limiting factor in making sure patients are offered guideline-concordant care for inguinal hernias is surgeon training, sometimes combined with geography. In more rural areas, for example surgeons may not have the training and tools to offer a minimally invasive approach, and patients may not want to travel far to get treatment.

“This goes to training and education for surgeons. The next generation of surgeons, whether they’re practicing in a tertiary surgeon or a small rural surgeon, need to have the skillset to offer the care that might be best for the patient,” Ehlers says.

Some of the concerns surgeons raised about data could be addressed through more study. That includes looking more closely at populations not well represented in previous research, namely women.

“For inguinal hernias, the data is mostly from men, and there’s little data informing care for women, so the guidelines are a little one size fits all. That work may help address some of the concern from surgeons about the data not being so robust,” Ehlers says.