Learn more about the Cho Lab's work and impact. 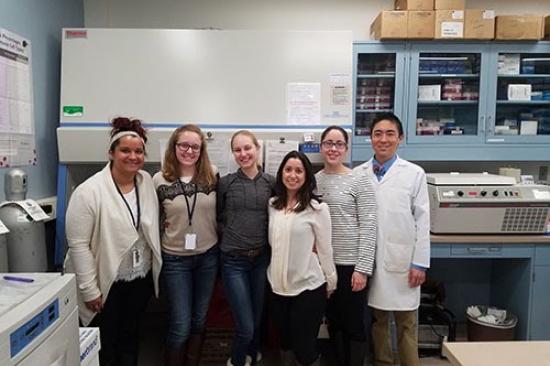 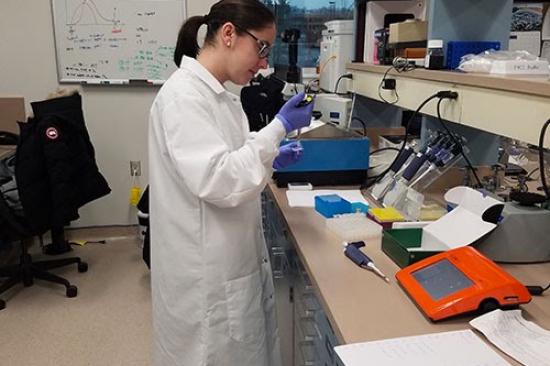 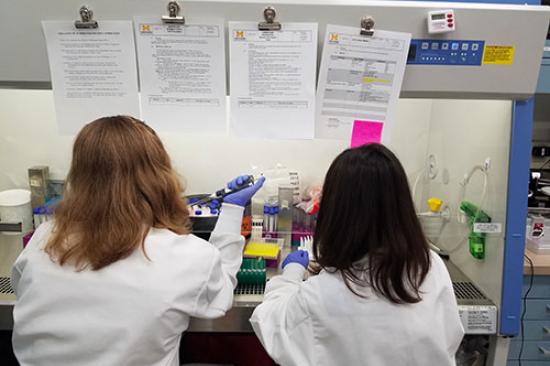 The Cho Lab focuses on a particular type of immune cell: CD8+ T lymphocytes. These white blood cells begin life as naïve T cells, each capable of recognizing a highly-specific protein pattern on invading pathogens. Upon encountering their target, naïve T cells activate, quickly transforming into effector T cells and rapidly proliferating to eliminate the target antigen. Relatively short-lived, most effector T cells undergo the self-elimination process of apoptosis once the target antigen has been removed. But a small subset remains and transforms into memory T cells. Memory T cells protect the organism from the same target over time, thereby laying the foundation of adaptive immunity.

For decades, immunotherapy research has focused on effector T cells as the primary weapon against cancer given their ability to rapidly recognize, proliferate and attack their target. In addition, large numbers of effector T cells can be isolated and expanded from tumor-infiltrating lymphocytes — immune cells that have moved from the blood into tumors — and infused back into patients. This form of treatment is known as adoptive cell transfer (ACT) immunotherapy, and it can be dramatically effective for some patients and some types of cancer. But the treatment is complex, and the clinical results have been inconsistent.

Our very early work looking at the impact cancer has on immune cell physiology led us to the discovery that within a living organism with cancer, developing cancers have the ability to specifically impact and inhibit all phases of the CD8+ T cell lifecycle, with one notable exception: memory T cells. The discovery that memory T cells are not inhibited or suppressed by cancer led us to a new hypothesis: Perhaps these cells, rather than effector T cells, should be the focus of adoptive immunotherapy. But how to isolate and expand large numbers of memory T cells — present in very small concentrations — as well as learning how memory T cell-based adoptive immune therapy might be used synergistically with other forms of immunotherapy and cancer treatments has not yet been fully explored.

We continue to delve deeper into the physiology of memory T cells and the mechanisms underlying their resistance to cancer-induced immune suppression. Our goal here is to translate the memory T cell-based immunotherapy data we have obtained in our preclinical work to patients with cancer.

We also are actively investigating other therapies that can be used in conjunction with immunotherapy to heighten its impact and improve effectiveness. In particular, we're looking closely at the synergistic effects of histotripsy, a noninvasive tumor ablation method, to stimulate the immune response to cancer. Currently, we're exploring subcellular mechanisms underlying our observation that histotripsy significantly augments the immune response so that we can translate the findings for clinical use.

In addition, we are conducting investigations into how immune-based therapies impact cancer stem cells (CSCs). Our early observations are encouraging, highlighting specific aspects of immunotherapy that are especially effective at killing CSCs. Since CSCs have been found to be important drivers of disease progression, we are excited and motivated to further explore the dynamics of immune-based therapies and CSCs.

In early work, our laboratory discovered growing cancers exert an insidious influence on how CD8+ T lymphocytes develop and function over time. More specifically, we discovered that even very brief exposure to cancer blunts the ability of naïve T cells to turn into effector T cells and that this same brief exposure also causes effector T cells to undergo apoptosis more quickly. We also observed that exposure to cancer does not impact the ability of memory T cells to survive and reactivate in response to the same antigen in the future. These findings led us to hypothesize and demonstrate that, following adoptive cell transfer (ACT) immunotherapy in mice with melanoma, memory T cells are more effective at recognizing, infiltrating, killing and remembering cancer cells over time — in other words, conferring long-term immunity against cancer recurrence — than effector T cells. Further work in our lab found that combinatorial approaches using ACT with both effector and memory T cells can deliver additional benefits and therefore serve as a useful strategy to augment the efficacy of adoptive immunotherapy.

In order to translate our findings to the clinical setting, we recently identified a source and method for expanding massive quantities of cancer-specific memory T cells. This represents a key advance since, unlike effector T cells that can be expanded from tumor-infiltrating lymphocytes, memory T cells exist in very small quantities. Our laboratory also has shown that the combination of adoptive immunotherapy with another type of immunotherapy known as checkpoint inhibition results in a surprising synergy, leading to broad and flexible immunity to cancer recurrence.

Combinatorial approaches using immunotherapy with other forms of cancer treatment have led to several counterintuitive findings. For example, we have showed that, unlike chemotherapy, immunotherapy has a more powerful effect when delivered prior to the surgical removal of tumors rather than following surgery. And we have discovered that combinatorial approaches with immune-based and tumor-directed therapies such as histotripsy also can amplify the impact of immunotherapy. Our work found that this form of noninvasive tumor ablation stimulated more powerful tumor-directed immune responses than other forms of tumor-directed treatments, including radiation and thermal ablation, and can potently magnify the efficacy of immunotherapy.

The preclinical discoveries in our lab are pointing to ways current immune-based approaches might be modified or used in combination to improve the efficacy of immunotherapy and prevent disease recurrence. Driving our work is the knowledge that our findings ultimately can inform treatment strategies and improve outcomes for patients with all types of cancer.

We are looking toward further cancer stem cell work as well as clinical translatability of histotripsy in combination with immunotherapy to treat a broader range of patients and cancer types. Questions remain, but we are encouraged by our findings to date and eager to investigate further.

Our lab maintains strong collaborations with a number of investigators and organizations. Currently, we're working closely with: