Learn more about the Lubman Lab's work and impact. 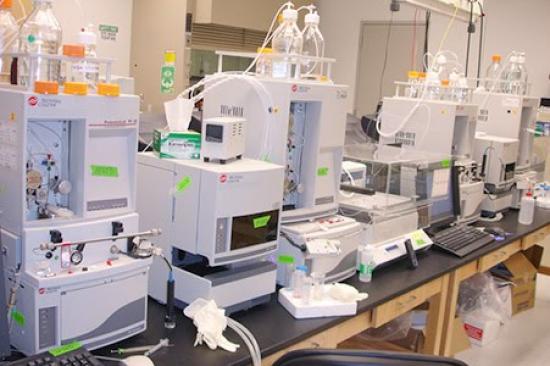 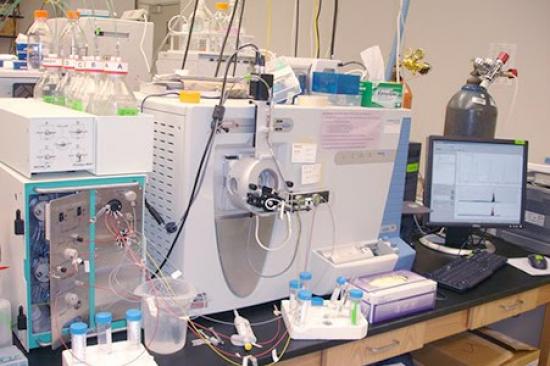 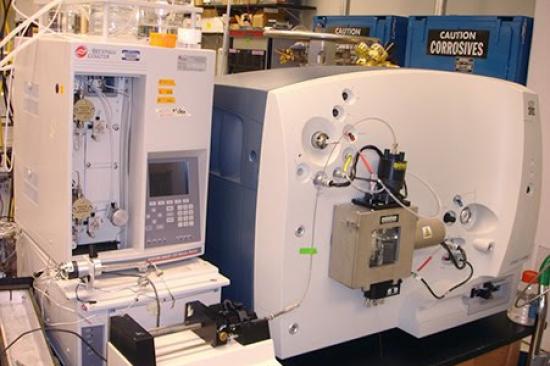 Glycoproteins provide fertile ground for biomarker discovery given their ubiquity in serum, blood and other biofluids. The complex carbohydrate groups that bind to the primary protein may be branched or charged, and these carbohydrates change in their composition and location in the setting of cancer and in other diseases. Analyzing these disease-specific changes can speed diagnosis, ascertain disease stage and progression and help monitor treatment. Our laboratory uses a wide range of methods and technologies – including mass spectrometry, many types of separations methods and antibody and protein microarrays – to analyze and profile large numbers of proteins, including glycoproteins.

Dr. Lubman and his team have developed a total liquid 2-dimensional separations method based upon isoelectric focusing in the first phase followed by nonporous RP HPLC to generate an image of the protein content of a cell lysate. The proteins in the liquid phase can then be analyzed by electrospray-TOF mass spectrometry to produce a molecular weight map of the proteins in the cell up to 100 kDa.

Further details on the structure of proteins identified as important to cancer are being determined using sequencing by capillary liquid chromatography/TOF-mass spectrometry, where changes in sequence and posttranslational modifications can be determined. Tissue microarrays are being used to learn about the response of antibodies to these proteins in different tissue samples.

Ultimately, proteins identified as being important to a specific type of cancer are being developed into a protein chip format as a means for early diagnosis of cancer. Biostatistics are being used to determine which proteins are important in cancer transformation and how different cancers can be classified according to the protein expression of the cell.

We investigate how these sugar-coated proteins are differentially expressed by cancer and normal cells. Understanding the ways in which proteins are modified or overexpressed in the context of cancer will provide a greater understanding of the pathways involved in tumorigenesis and metastasis. Extending our work has led us to develop new methods and instruments for two additional frontier areas in the field of proteomics: the detection and analysis of exosomes and of single amino acid variants.

The Lubman Lab is tackling the problem of cancer detection from a number of angles. In particular we are working toward identifying biomarkers to enable the use of liquid biopsies. Strategies toward this goal include:

Our laboratory conducts proteomic analyses of cancer cell lines and cancer cells to identify those SAAVs related to the disease and that potentially may serve as biomarkers.

The Lubman Research Laboratory has made many advances in instrumentation development over the years, including new methods and technologies for detecting, separating and analyzing proteins and glycoproteins. The quadrupole ion trap/time of flight (QIT/TOF) mass spectrometry system and the protein fractionation technology our lab developed for the liquid separation of proteins from cells and blood have been commercialized and being used worldwide. The glycoarray platform we developed has enabled us to generate intact glycoprotein arrays from serum using lectin extraction, and we can use several lectins to study the different responses between glycoproteins from cancer serum versus normal serum or serum in the presence of inflammation.

In addition, we have developed a high-throughput screening assay using an antibody array for these specific proteins followed by a lectin sandwich assay where we can follow the response in large numbers of samples. This can be performed for early stage cancer and for other clinical conditions. The platform has been commercialized and is being used in hospital-related biomarker studies for early detection, prognosis and therapeutic monitoring. Our laboratory also developed the matrix-assisted laser desorption/ionization (MALDI) time-of-flight mass spectrometry technique for the rapid screening of bacteria for changes in protein expression. First published in 1992, the technique continues to be used in both research laboratories and clinical settings today. We continue to generate novel methods for the purification and analysis of exosomes using multiple cycles of centrifugation, ultracentrifugation in combination with other technologies and most recently novel chromatographic techniques. The technologies and methods developed in our laboratory are having an ongoing impact on proteomics and cancer research.

Our work on the analysis of protein surface markers of cancer stem cells (CSCs) has led us to CD90 as a potential biomarker of glioblastoma CSCs. Although CD90 has been linked to other types of cancer, we are the first to identify its presence in the context of glioblastoma.  We also were the first to identify the glycoprotein haptoglobin as a marker of pancreatic cancer, and as we later discovered, of hepatocellular carcinoma as well. In both cases, changes in the patterns of carbohydrate attachment to the protein peptides have the potential to identify early-stage cancers and differentiate it from other conditions, such as diabetes in the case of the pancreas or cirrhosis in the case of the liver.

Our laboratory work has and will continue to have significant impact in the clinic. For example, the MALDI technique for high-speed profiling and identification of bacteria developed in our laboratory speeds diagnosis and treatment of life-threatening infections and infectious diseases. The markers we are identifying to detect cancer stem cells in many types of cancers can be correlated with disease progression, helping to better evaluate a patient's prognosis and help guide treatment decisions. Markers, such as haptoglobin, may one day soon help clinicians screen patients at high risk for liver and other types of cancers and detect the disease in its early stages, thereby offering patients a wider range of treatment options to improve survival.

We are excited about the many directions our work is leading, including:

We continually look for new ways to apply our methods and technologies to improve detection and early diagnosis as well as therapeutic monitoring in cancer and many other diseases. This is a pressing and ongoing need in medicine.

Our work is highly collaborative. We work with many investigators at U-M and other institutions, for example: