Learn more about the Henke Lab's work and impact. 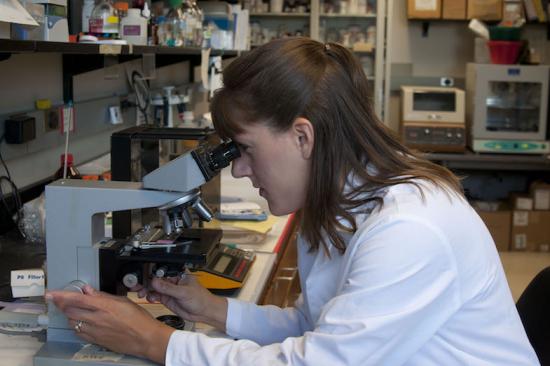 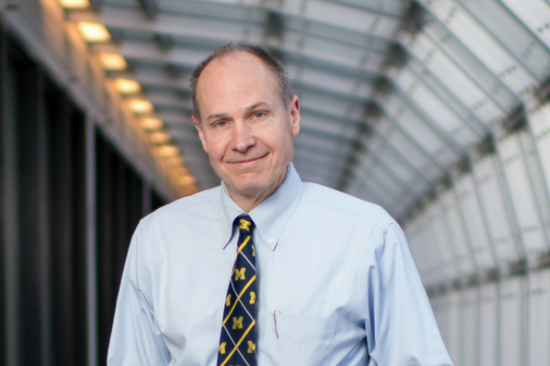 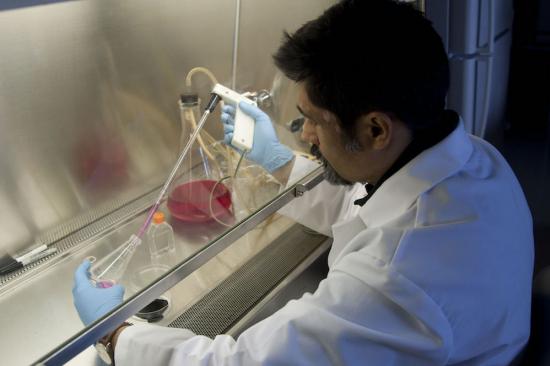 Our work continues to elucidate the basic mechanisms underlying venous thrombosis (VT). The findings bring us closer to translating the therapeutic pathways and approaches that we define in preclinical models for clinical benefit.

Toward that end, we continually ask two key questions. First, which molecules or pathways we might be able to target with an agonist or agent to enhance the body's natural clearance of VT without bleeding? And second, which molecules and pathways contribute to vein wall thickening following VT and, if modified, might prevent scarring and maintain the flexibility of healthy veins?

Our lab uses a number of strategies to carry out our work. At the University of Michigan, we have access to a unique tissue bank of VT biopsy samples, and we evaluate these for certain molecules that are present in a chronically thrombosed human vein to better understand how our animal models correlate to what we see clinically in humans.

With colleagues in the Jobst Vascular Research Laboratories, we conduct genomic analyses in animal models — in both stenosis and total occlusion models of VT — and in human tissue to identify the genes expressed soon after thrombosis that impact resolution and scarring. In all of our studies using preclinical models of VT, we aim to replicate the human clinical situation as closely as possible.

Using genetic and immunologic assays, we're able to delve deeply, investigating molecular signaling among immune cells, including neutrophils, lymphocytes and monocytes/macrophages. These studies help us understand which cell types are present in the environment around VT and how the vein wall interacts with and responds to each.

Work of our colleagues in the Jobst Vascular Research Laboratories has confirmed that thrombogenesis is an inflammatory process, mediated by leukocytes. Our early work looked at the cytokines involved early on in this process, signaling leukocytes to the site of a clot. In particular, we described the role of three of these signaling molecules in a mouse model, CXCR2, CCR2 and, more recently, CCR7.

We have looked at the role of other immune cells, including neutrophils and monocytes/macrophages, and found that, like many processes in biology, these cells serve dual purposes and — importantly — are time-dependent. For example, depleting monocytes/macrophages in a mouse model led to larger clots at a midterm point in time but, at later points, to less vein wall injury.

Related work in a rat model found that depleting neutrophils led to larger clots, and more fibrosis, furthering our understanding of the role these cells play in early DVT resolution.

Since hospitalized and recently released patients have a significantly heightened risk of DVT, even with preventive anticoagulation therapy, we work with our Jobst Laboratory colleagues to identify the mechanisms of thrombogenesis in a mouse model of sepsis, or systemic infection. Studies in our animal models has found that clots are larger in the setting of sepsis, likely due to two processes: the release of ICAM-1 (intercellular adhesion molecule 1) and release of TLR 4 (toll-like receptor 4).

In related work in our models, we found that remote infection, such as pneumonia, led to larger clots and increased expression of certain cell adhesion molecules, including ICAM-1. If we could selectively inhibit these molecules in our patients with similar infections, we might be able to prevent them from developing DVT.

We have elucidated the role of other mediators of the fibrotic process that occurs following VT including:

Over the years, we've gained a number of insights into the physiologic mechanisms of the fibrotic process that occurs in the vein wall in the context of VT. We've identified several pathways and factors that mediate the process. Overall, the findings point us toward new therapeutic targets.

For example, we have elucidated the role of IL-6. IL-6 inhibitors are already in use in other disease states, potentially shortening the timeline to clinical translation to prevent vein wall damage in VT.

Discovery of the time-dependent nature of many of the factors and processes involved in VT resolution as well as vein wall scarring will be important to guiding treatment. For example, matrix metalloproteinases are important in the early stages of clot resolution but at later points in time, they also play a role in fibrosis, suggesting that inhibiting agents might act optimally if delivered after the clot begins to break down.

We are actively pursuing work on the role of monocytes/macrophages on vein wall injury to better understand their full impact on overall thrombus resolution.

Collaboration has been integral to our work over the years: