The 32nd Annual Moses Gunn Conference is Wednesday, March 11, 2020. We are honored to have Lisa Newman, MD, MPH, FACS, FASCO from Weill Cornell as the 2020 keynote speaker. 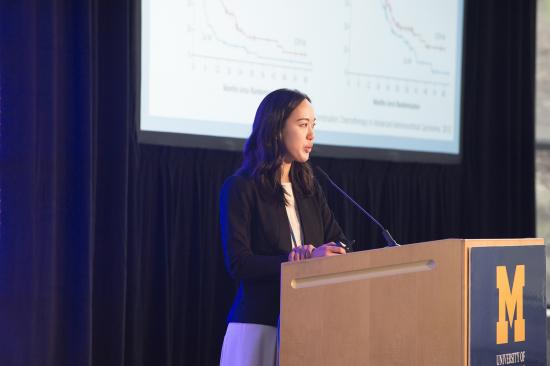 Submissions must be from the Department of Surgery which includes the Sections of General, Oral & Maxillofacial, Pediatric, Plastic, Thoracic, Transplant, Vascular and the Division of Anatomical Sciences. All submissions for review will be considered for oral presentation or poster display. The deadline for submitting abstracts and award packets is December 18, 7:00 a.m.

Dr. Newman is a surgical oncologist with a practice dedicated to breast cancer management. In August 2018 she was appointed to oversee the breast program for the Weill Cornell Medicine-NewYork Presbyterian Hospital Network, serving its Manhattan, Queens and Brooklyn sites. Previously, she worked at the Henry Ford Health System, where she served as breast program director, covering multiple hospitals throughout Michigan since 2015. She is also the Founding Medical Director for the International Center for the Study of Breast Cancer Subtypes, currently headquartered at Weill Cornell Medicine. Dr.  Newman was Professor of Surgery and Director of the Breast Care Center for the University of Michigan in Ann Arbor, Michigan, where she also served as Program Director for the Breast Fellowship from 2002 to 2015. Dr. Newman holds a Masters Degree in Public Health from Harvard University, and she also obtained her undergraduate education at Harvard.  She attended medical school and completed her general surgery residency training at the State University of New York Downstate Medical Center in Brooklyn. Dr. Newman was recruited to remain at Downstate following completion of her postgraduate training, and served as an Assistant Professor of Surgery with this program for several years. She pursued fellowship training in surgical oncology at the M.D. Anderson Cancer Center 1997-99, followed by joining the faculty as an Assistant Professor; she continues to hold an Adjunct Professorship with M.D. Anderson. She has previously held Adjunct Professorships with the University of Michigan School of Public Health as well as the Department of Obstetrics and Gynecology. She served as Associate Director for the Walt Breast Center at Wayne State University/Karmanos Cancer Institute for two years.

Dr. Newman’s primary research has focused on race/ethnicity-related variation in breast cancer risk and outcome, the evaluation and management of high-risk patients; broadened applications for neoadjuvant chemotherapy, and special surgical techniques such as the skin-sparing mastectomy and lymphatic mapping/sentinel lymph node biopsy.  Her extensive research related to disparities in breast cancer risk and outcome has been published in numerous peer-reviewed medical journals and was featured in CNN’s documentary “Black in America 2”. She has also been the featured breast cancer medical expert for NBC’s “Today Show” (2014; 2017; 2019) as well on CBS Nightly News (2015). She maintains a very active community service record, and currently serves as Chief National Medical Advisor for the Sisters Network, Inc., a national African American breast cancer survivors support organization.

She oversees an international breast cancer research and training program involving a network of physicians and facilities in Ghana, Ethiopia, Nigeria, Uganda, Mexico, and the Caribbean. This program has focused in the study of triple negative breast cancer in women with African ancestry. Her work has been acknowledged with several awards, such as “Top Blacks in Health Care 2018”; Phenomenal African American Women of 2018”; “Esteemed Women of Michigan 2018”; Crain’s “Health Care Hero” in 2017; 2012 Triple Negative Breast Cancer Foundation Hero Award; and the 2010 National Medical Association Woman in Medicine Award. She was named “Michiganders of the Year” in 2011; and an “Oprah’s Angels” for breast cancer work by Oprah magazine in 2012. She has received the University of Michigan 2012 Community Service Award; the 2013 Sarah Goddard Power Award for Advancement of Women in Academic Medicine; and the 2015 Harold Johnson Diversity Award. She has been named one of Detroit’s “Top Docs” and “Top Doctors of America” for several years. Dr. Newman has also been awarded the coveted title of Komen Scholar, and is a member of the Komen Scientific Advisory Board. Most recently, Dr. Newman was named a 2019 “Rock Star of Science and Medicine” by the European Society for Medical Oncology”

Dr. Newman has been appointed to multiple national and regional leadership positions, including the CDC’s Advisory Committee on Breast Cancer in Young Women; the NIH’s Clinical Trials Advisory Committee; the Advisory Council to the National Institute of Minority Health and Disparities; chairperson for the Breast Committee of the Michigan Cancer Consortium. She has held leadership positions in the most prominent of oncologic academic and advocacy organizations: Society of Surgical Oncology (Executive Council; Disparities Committee chairperson); American Society of Clinical Oncology (Health Disparities Advisory Group chair; Health Services Committee chair); American Cancer Society (National Assembly;  Board of Directors for the Great Lakes Division); American College of Surgeons Oncology Group (Executive Council; Special Populations Committee chair). Dr. Newman’s editorial board service includes: Annals of Surgical Oncology (Breast Section Editor); Cancer (Disparities Section Editor); Journal of Clinical Oncology (Breast Section editorial board member) and she is currently on the editorial board for JAMA Surgery. Dr. Newman is chair of the AACR Regional Advisory Group on Africa, and she is co-Chair for the AACR 2020 Cancer Disparities Symposium. In October 2019 she was appointed 2nd Vice President-Elect for the American College of Surgeons.

Presented annually to the Chief Resident who has demonstrated the most outstanding accomplishments in research during residency training.

Presented to a Department of Surgery Fellow or Resident who has demonstrated originality and scientific merit in research.

Presented to a Graduate Student or Medical Student who has demonstrated originality and scientific merit in research.

The awardee will present at the Moses Gunn Research Conference.