Learn more about the life and legacy of Dr. Moses Gunn. 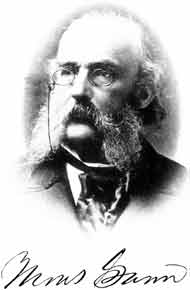 The first period of teaching surgery at the University of Michigan began with Moses Gunn in 1850.

Moses Gunn was born in 1822 in East Bloomfield, New York. He was first educated at home by a local clergyman and then at the East Bloomfield Academy. Upon choosing surgery for his career, Moses apprenticed himself to Dr. Edison Carr. Carr, having a high reputation as a surgeon, trained Moses both in the office setting and on house calls in the countryside.

In 1842, at the age of 20, Gunn enrolled in the fall term at the Medical Institution of Geneva College in Geneva, New York. He attended lectures in obstetrics, material medica, general pathology and chemistry. However, he was particularly interested in anatomy and surgery. In 1845, Moses heard that the University of Michigan planned to start a medical school in Ann Arbor. It was his desire to become that school's professor of surgery that had Moses packing at the end of the term and heading west.

Arriving in Michigan, Gunn began to give courses in anatomy. In the early years, the school was unable to offer courses in dissection. Patients were also hard to come by, and, therefore, the teaching of the day was through lectures. Class sizes of the years 1846-1849 ranged between twenty-five and thirty.

In 1848, the Regents of the University began to organize a Department of Medicine and Surgery. Moses took the opportunity to share his advice as to how the department should be created. As a result, it was structured very much like Geneva College. Moses Gunn would be one of the first five members of the medical faculty to begin teaching a class of ninety-two on October 3, 1850.

War interrupted Gunn's teaching when he became a surgeon to the Fifth Michigan Volunteer Infantry on September 1, 1861. He joined McClellan's Army of the Potomac with whom he cared for Union soldiers wounded in the battle of Williamsburg. Ill health forced his resignation, and he returned to Michigan to resume his medical practice in 1862.

Gunn earned a high reputation as a surgeon and he was a founder and later vice-president of the American Surgical Association. Gunn performed every type of operation available to a surgeon in the second half of the nineteenth century. He had a cool head, was ambidextrous and operated rapidly. His success was based upon his profound knowledge of anatomy and upon his preparation. C. B. Nancrede, who knew Gunn well, said, "Every step of an operation was carefully traced out, every possible complication and its remedy provided for, every instrument or appliance was mentally as it was later actually set aside in its place."