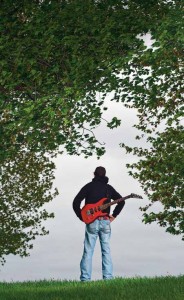 If only 25 percent of the currently unusable lungs were salvaged, it would double the number of available lungs for transplantation

Kyle Clark, 25, of Imlay City was a very sick young man when he was admitted to U-M in February. Oxygen therapy was no longer sufficient to keep the effects of cystic fibrosis at bay, so physicians at the U-M Transplant Center moved him along an expedited pathway to join a groundbreaking clinical trial.

The University of Michigan and Gift of Life Michigan, in collaboration with Henry Ford and Spectrum health systems, are the only study participants in Michigan. The study, which is on the forefront of science and technology, uses ex vivo lung perfusion to optimize lungs for transplantation that might otherwise have been deemed unusable.

Ex vivo perfusion is based on the heart-lung support technology known as extracorporeal membrane oxygenation, or ECMO, which was pioneered at the University of Michigan by Robert Bartlett, M.D., now a professor emeritus of Surgery.

The study is evaluating the revolutionary XVIVO Perfusion System from Sweden, which has the ability to warm lungs to normal temperature, re-inflate them and allow physicians to recondition and evaluate them for transplant. The environment permits the potential recovery of transiently damaged lungs in a short period of time.

“Think of the XVIVO as an incubator. Right now, our transplant team has a window of about four hours to determine whether lungs are optimized in the XVIVO and are going to be suitable for transplant. But the window of recovery is brief and the transplant must take place soon after. Things moved rapidly for Kyle,” says Rishi Reddy, M.D., one of the U-M transplant surgeons who performed Clark’s transplant. “In the future, I expect improvements will give us more time to assess donated lungs. Perhaps we could have as long as 24 hours for lungs to be reconditioned and implanted.”

In Clark’s case, the donated lungs would not have been suitable but for the recovery process they went through prior to implantation, and he would have remained on the transplant waiting list, losing more of his ability to breathe as each day passed. Instead, he became the first Michigan resident to receive lungs reconditioned in the XVIVO device.

Salvaging lungs to save lives

“Historically, less than 20 percent of organ donors actually have their lungs used to save a life. Often the nature of a donor’s death traumatizes the lungs, even when other organs are usable. For example, lungs may be bruised or punctured from the trauma of an automobile accident,” says Reddy. “But others are unusable because they are transiently injured. Some of these can benefit from the special incubation and reconditioning in the XVIVO device. This means that in the future, there will be more lungs available for transplant, and people on the list could have shorter wait times.”

Reddy anticipates that even if only 25 percent of the currently unusable lungs were salvaged, it would double the number of available lungs for transplantation. And with quicker access to transplantation, fewer people will die while waiting.

Ex vivo perfusion is one of three research approaches to the shortage of donor lungs, and the first to come to market. Organogenesis and stem cell transplants show promise in replacing or repairing damaged lungs but are not yet ready for clinical study.

Collaborating to raise hope (sidebar): Transplants using the XVIVO Perfusion System from Sweden currently take place within the framework of an interventional clinical trial studying the safety of recovering marginal donor lungs for implantation. The University of Michigan, Gift of Life Michigan, who purchased the device, and Henry Ford and Spectrum health systems are collaborating in the clinical trial.

The device resides at U-M where its five lung transplant surgeons use the XVIVO device to provide services to the lung transplant programs at Henry Ford and Spectrum, as well as their own. The U-M Transplant Center ™ is the largest and most experienced in Michigan, and one of the largest in the nation. The collaboration among the three transplant centers is unique in Michigan and was done to bring the hope of transplantation to more patients needing this lifesaving surgery.

Get more information about the XVIVO trial at umclinicalstudies.org or visit clinicaltrials.gov and enter identifier: NCT01365429

This article originally appeared in the Summer 2017 issue of "Colleagues in Care."