Partnerships like UM-AIIMS benefit the U-M on a number of other levels.

Though the number of global health programs supported by universities in the United States has increased steadily over the last decade and a half, few programs have included global health training with respect to surgical disciplines. Krishnan Raghavendran, M.D., a University of Michigan professor of surgery, saw an opportunity for the U-M to share its surgical expertise in the developing world through a formal partnership with All India Institutes of Medical Sciences, or AIIMS, in New Delhi. And he was instrumental in establishing The UM-AIIMS collaborative in 2010.

“Surgical departments within American academic institutions can play key roles in establishing programs in global health that have the potential not only to change the landscape of research, but also to provide an opportunity for faculty and residents to embark on new frontiers,” Raghavendran says.

Since the collaboration began, U-M surgical leaders have been involved in bilateral discussions and visits to AIIMS pertaining to the creation of a curriculum for development of trauma and surgical critical care programs in India, while also providing technical background relevant to contemporary research. A traveling program, in which AIIMS faculty visit the U-M trauma burn and critical care program, was established. This program, which included a two-month visit by these faculty members from AIIMS, was funded through an initiative by the Department of Surgery. At the conclusion of this visit, faculty members were able to write grant proposals that led to successful awards from the Indian Council of Medical Research, or ICMR, and the Department of Bio-technology in India.

“I have to say that one of the reasons for our early success is because of [Department of Surgery Chair] Dr. [Michael] Mulholland,” Raghavendran says. “He really liked the idea of the partnership, and he was responsible for the funding for these physicians to come here and spend six-to-eight weeks with us. The collaborative now includes 10 to 12 departments at the U-M and about 40 faculty members.”

In November 2014, a week long, intensive course in research methods was undertaken as part of the UM-AIIMS collaboration. The course was designed to build bi-directional opportunities for research between the two institutions and countries. It also addressed an AIIMS need for a formal, structured experience that would assist junior faculty in developing best practices for translational and clinical research.

“We worked with 50 junior faculty across India during a five-day course that explored topics such as how you think about a research question and how you look for clinical ways to answer that question,” Raghavendran says.

As a result, 10 successful concept ideas were initiated across multiple disciplines and then developed into full proposals with mentorship from both the institutions. One such collaborative idea was able to obtain joint funding from the NIH through the US-India Collaborative Award to examine the use of ultrasound in measuring optic nerve sheath diameter as a marker of intracranial pressure elevation in traumatic brain injury, or TBI.

The awards from NIH and ICMR further strengthened the research coordination center at AIIMS by enabling employment of research staff. Most recently, a joint proposal involving a clinical trial of very early decompressive craniectomy, or DC, in patients with severe TBI in India was submitted to the NIH. DC is a neurosurgical procedure in which part of the skull is removed after a TBI to allow the swelling of the brain room to expand. Some studies have suggested patients live longer after their TBI if surgeons perform this procedure.

“What we are trying to find out is if we do the DC procedure relatively early, that is within 12 hours of injury, in addition to approved mortality, can we also see a benefit in neurological outcome,” Raghavendran says. “These types of studies are relevant to India because they have the patient population where such procedures are being performed routinely; we have the technical know-how to build and conduct the study properly.”

A second research methods course, reinforcing takeaways from the first, was held in mid-March.
Raghavendran says that these courses and the collaboration with AIIMS as a whole allow the two institutions to explore valid research questions that hold meaning not only for India, but for the United States and the rest of the world. As an educational benefit, U-M residents and students traveling to India to participate in the program gain an understanding of the advantages and disadvantages of the country’s health system and how such a system functions in a resource- limited environment.

Partnerships like UM-AIIMS benefit the U-M on a number of other levels as well.

“Working with another country and helping them build their capacity to do research is something we should be proud of,” Raghavendran says. “Capacity building for research activities in the developing world is a necessary first step in establishing long-term relationships leading to clinical trials and meaningful translational research in the future.” 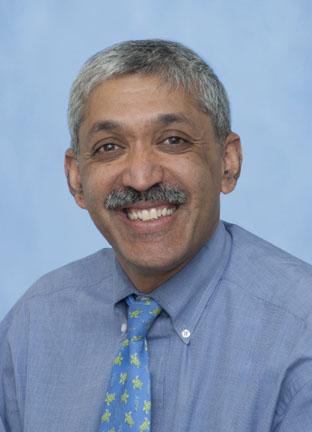