Culture is Complicated, and There’s a Curriculum for it 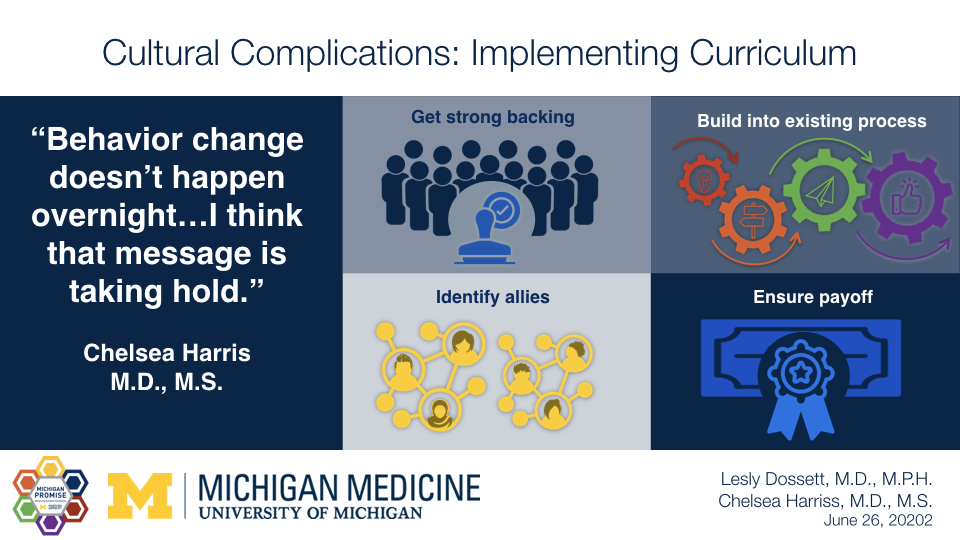 Surgeons are used to discussing clinical complications, and there’s even a formal process for it: In the Department of Surgery, weekly death and complications (D&C) conferences are held to peer-review specific cases with adverse outcomes. The goal is to discuss them in a non-threatening way and to find ways to prevent similar outcomes.

What happens when an adverse outcome is rooted in the cultural rather than the clinical?

It’s complicated, and it also benefits from peer review.

A diversity, equity and inclusion workgroup for residents facilitated by faculty a couple of years ago surfaced issues of cultural complications—things like microaggressions residents might experience from peers or faculty, or even outright harassment from patients. Lesly Dossett, M.D., M.P.H., an Assistant Professor of Surgery in the Division of Surgical Oncology at Michigan Medicine, was one of the faculty facilitators and it became clear that the discussions needed a bigger stage.

“One of the things that came up was that these episodes would happen, but there was no place to talk about them, or to learn from them. We talked about leveraging our death and complications conference for that,” Dossett said.

At the same time, Justin Dimick, M.D., M.P.H., Chair of the Department of Surgery, was on a “HeForShe” committee, an initiative from the Association for Women Surgeons, to leverage powerful male allies to champion women's issues. In order to be on the committee, male members had to appoint a female faculty member and a female resident to join with them.

Dimick tapped Dossett and Chelsea Harris, M.D., M.S., a University of Maryland general surgery resident who was at the time a research fellow at Michigan, for the group, and they talked about project possibilities.

Harris had done research into gender disparities and microaggressions and, as the former creative director for the Annals of Surgery, had a strong design background. Dossett had the recent insights from the workgroup. Soon there was a focus and a formal outlet for the cultural complications to surface: D&C conferences.

A rocky start, and some lessons learned

Designing the curriculum was the easy part, it turned out. Harris and Dossett collaborated to create 12 modules, complete with talking points and graphics, tackling topics from bias in performance evaluations to how the diversity bonus works in medicine. All of the modules were hypothetical scenarios rooted in reality, representing things that had or could have happened.

Back at the University of Maryland, Harris piloted the curriculum at their morbidity and mortality (M&M) conference. The first flight was turbulent; some in attendance thought it was a waste of time, and expressed that.

“It ended up being fairly antagonistic. It put me back on my heels and once I got over the shock and hurt feelings, I sat down and got back to work on how we can make this work,” Harris said.

Feedback surfaced things Harris hadn’t anticipated while constructing the curriculum: For example, that some people would prefer cases focused on patients rather than on providers, since the forum was dedicated to patient experiences.

Harris tweaked the cases to implement the feedback, while keeping with the spirit of the mission.

“The gender-fair language module was initially about some of the ways we talk about women in letters of recommendations. I switched it to being about misgendering a patient in the ICU; we stopped giving hormone treatment to a patient after a procedure and she started growing back facial hair. It became clear that the staff had a hard time with that,” Harris said.

Allyship is critical—and so is placement

Harris also learned valuable lessons about securing explicit buy-in for such ventures; while she’d reached out to stakeholders before the session and not met resistance, she also didn’t have a visible ally. Now, she has a champion in Dr. Sheri Slezak, M.D., the Chief of the Division of Plastic Surgery.

“Identifying who your champions are going to be is critical,” Harris said.

Dossett is grateful for Harris’ work to pave the way, and for a receptive audience within the Michigan Medicine Department of Surgery. Still, there’s recognition that enthusiasm could vary, and an intentionality in the placement of the sessions—right in the middle of the D&C sessions—for maximum participation.

The sessions have flipped the usual participation dynamics within the D&C sessions, and had the effect of students and residents educating faculty, Dossett said:

“When we present typical clinical complications, it’s recognized that the faculty are the content experts and they drive the conversations. When we talk about issues of gender or race or microaggression or implicit bias, it’s not the most senior people in the room that are necessarily the content experts and we have learned a lot from the knowledge and lived experiences our students and trainees have shared.”

Harris saw the same trends with the curriculum in terms of engagement at the University of Maryland; medical students and residents are as vocal as the attendings. After some exposure, things started changing.

Just as Harris adapted the curriculum to make it easier to introduce, surgeons at her institution adapted their thinking to see value in the subject matter.

“I've had attendings come up to me and say I thought this was fluffy when you started it or it wasn’t very relevant to my life but I’ve come to see some value in it,” Harris said.

Residents have said that the conversations are spilling over into the operating rooms, a sign that the sessions are taking root, even if the conversation in the auditorium is sometimes muted.

“Behavior change doesn’t happen overnight. The message I’m trying really hard to convey is that it’s not just old white men who have these problems. We all have these tendencies and biases and we all have room to improve and get better. I think that message is taking hold,” Harris said.

Back in Michigan, Dossett has seen the sessions evolve to reveal knowledge gaps that necessitate more awareness and training, and problems that demand processes and solutions.

For example, in a case discussion about sexual harassment from patients directed at providers, it became clear that there wasn’t clear policy about how to handle it—and that many people had experienced it.

Another point of action, more rooted in awareness, came out of a case discussion about misgendering transgender patients. It became clear that not all sections or units have the same fluency for interacting with such patients.

“That discussion revealed a huge knowledge gap so we’re planning to follow up with sessions that can speak to that and provide education as part of our Michigan Promise Grand Rounds series,” Dossett said.

The work in this space is never done, but creating room for difficult conversations and then having those conversations is where it starts.

Building awareness is the first priority and acting on it is critical: Just as it was key to get backing from leadership to make the sessions a success, showing those who do buy in—especially on a personal level—that their contributions make a meaningful difference is just as important.

“If you open a can of worms and you’re asking people to access some of the tougher aspects of their experience or their identity, are you asking people to do this emotional work for no payoff?”

How to create spaces to continue the conversation in a productive way is an open-ended question,” Harris said.

How to get the curriculum:

Go to culturalcomplications.com and fill out a form to request it. You’ll receive a follow-up email with links to the curriculum. You’ll be asked to designate a point person to respond to a survey for data-collection purposes. 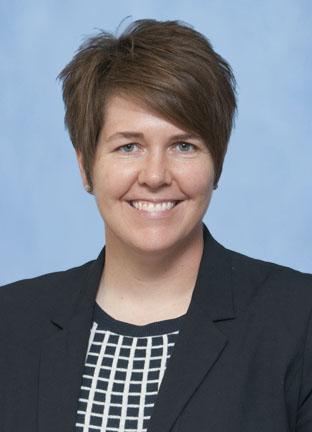