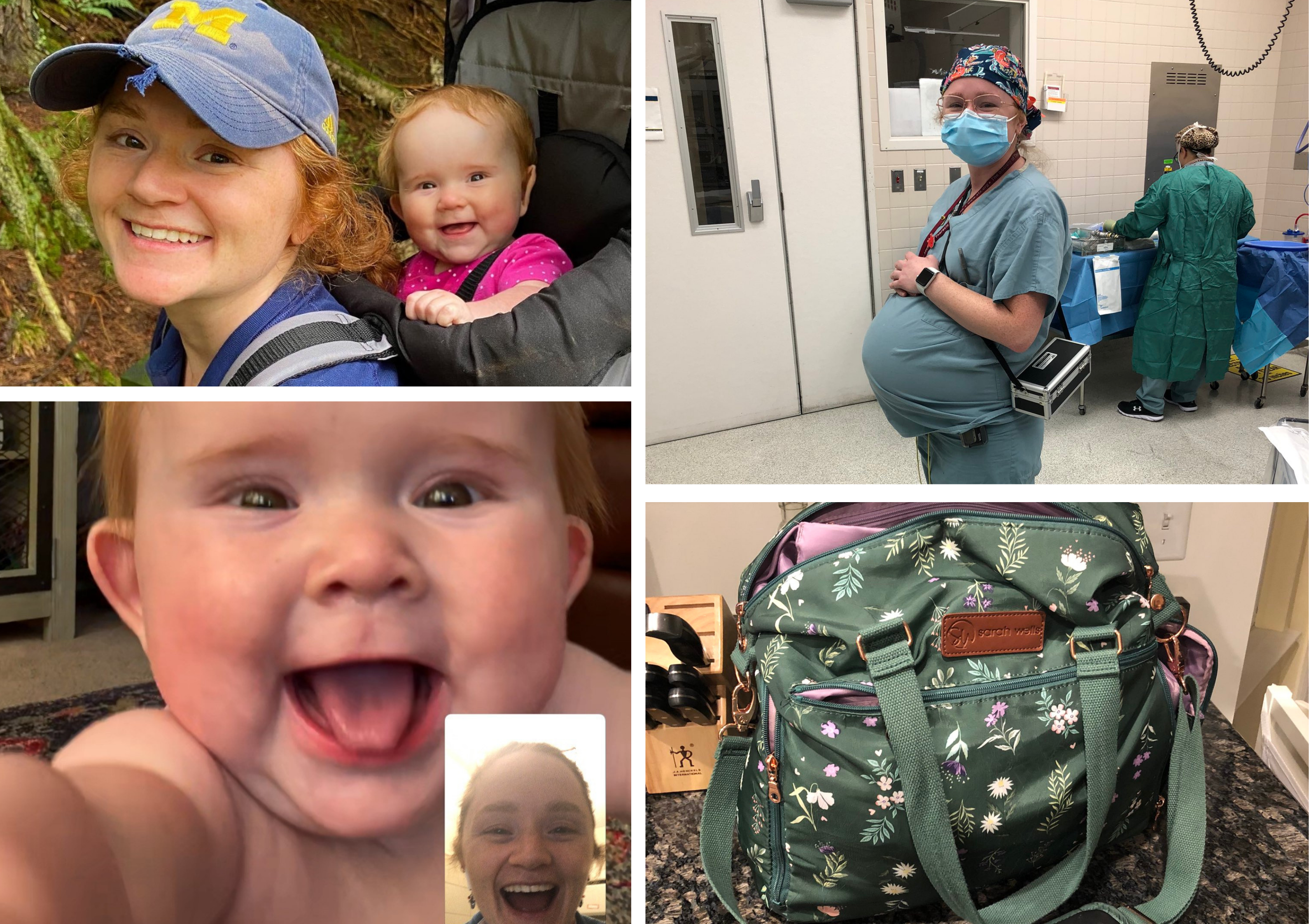 Dr. Catherine Wagner’s daughter Lucy started walking recently, taking off enthusiastically and hesitating once she realizes she’s on the move without assistance. It’s frightening to start something new on your own.

Wagner, a cardiothoracic surgery resident at Michigan Medicine, might relate in some ways. Trying to figure out how to breastfeed and pump while in residency was unfamiliar and sometimes scary territory—but a network of support meant she wasn’t doing it all alone.

“Everyone wanted to support me in this journey and that’s what helped me get to a year of pumping,” Wagner said.

Wagner recently retired her bag of pumping supplies and reflected on the journey.

A built-in community to lean on

The policies laid out practical guidelines from providing time and dedicated spaces for pumping. They also helped to set the cultural tone, so Wagner felt comfortable approaching other residents about their experiences in preparation for her own journey. People she’d never met also took the initiative to reach out after her daughter was born to check in and offer advice and support.

“The community of surgeon moms is incredible. When I was getting ready to go back to work I felt comfortable asking how they fit in pumping as clinical residents. All of them answered differently, but all of their advice helped me,” Wagner said.

Support from fellow residents who’d been down the road of pumping while training extended beyond advice to the material, with one even offering to lend a wearable pump for Wagner to try.

Male co-residents and attending surgeons couldn’t offer the same kind of advice and support her female residents did, but Wagner said they were understanding and accommodating.

“A lot of my male co-residents had had babies and seen their wives go through pumping so many of them knew what the demands were. I was relying on my co-residents to support me in the daily grind of work,” Wagner said.

A matter of timing and balance

The integrated cardiothoracic residency program includes six years of clinical training and two research years in the middle. The research years may have been an easier time to have a child for a few reasons, including not having to figure out how to pump while in surgical cases. However, Wagner was also aware that waiting could present other challenges.

“A lot of female surgery trainees have difficulty getting pregnant. I knew that and didn’t want to delay starting a family out of concern for how it would impact my clinical training. I figured there’s no good time to start a family, so let’s just try and see what happens,” Wagner said.

Wagner worked until she delivered Lucy at 39 weeks and took 12 weeks off after the birth. She credited accommodations put in place by the Department of Cardiac Surgery and Department of Surgery to protect pregnant trainees and facilitate healthy pregnancies with her being able to work so late into her pregnancy. The key accommodations allow pregnant trainees to scrub out every 3-4 hours for breaks, excuse them from clinical duties for all prenatal care appointments and exempt them from overnight shifts and shifts longer than 12 hours during the third trimester. Wagner pointed out that faculty members Jennifer C. Romano, M.D., M.S. and Karen M. Kim, M.D. were instrumental advocates for the policies.

The timing of Lucy’s birth was fortuitous out in one way: The American Board of Thoracic Surgery permits two six-week parental leaves during training, one during the first three years of training and another during the last three years. The way Wagner’s leave was structured (it also included two weeks of vacation) means that she’ll only have to make up four weeks of training.

Once back at work, Wagner adjusted to balancing clinical demands with her own biological ones. She pumped in the car on her way to work on the advice of another resident. While at work, she didn’t make use of the lactation rooms often because they weren’t always convenient to her. She also didn’t feel like she required them, since the process was discreet and her co-residents were so accommodating.

“I would usually pump in a call room or the office of the cardiothoracic residents. I was really comfortable. I would pump and people would be doing their work next to me,” Wagner said.

Needing to pump while in the OR was a different story and the most difficult scenario to handle. Cardiac surgery cases are long (usually at least 6-7 hours) and Wagner needed to pump every 3-4 hours in order to keep up her supply of breast milk. She had to scrub out periodically, but could often wait until the team was closing or transporting the patient to minimize disruption to her learning and ensure continuity of care.

Wagner said that attending surgeons were always accommodating, but that there’s still room for more education in terms of what to expect—especially in such a male-dominated field.

“It seemed like a lot of attending surgeons didn't understand how often or how long I’d be gone. They were fine with it, but we need to make sure everyone knows what’s normal if someone is pumping full time,” Wagner said.

Other scenarios called for even more creativity. Wagner once brought her pumping supplies along on an organ procurement but forgot the cooler to keep her milk cold—a necessity when a procurement can take up to eight hours. The transplant team offered up the organ cooler for storage.

"When the organ went in, I took my milk out because at that point we just had an hour or so to get to the hospital. That was the most unique place I’ve stored a bag of milk,” Wagner said.

(There was no risk of contaminating the milk or the organ, which was secured in many sealed bags.)

It was one of many ways Wagner found that action followed talk.

“The recent track record of taking care of trainees when they’re pregnant and also after pregnancy with these lactation policies highlights the progress that’s been made. I’m grateful to the culture at Michigan and to Sarah and Ari,” Wagner said.