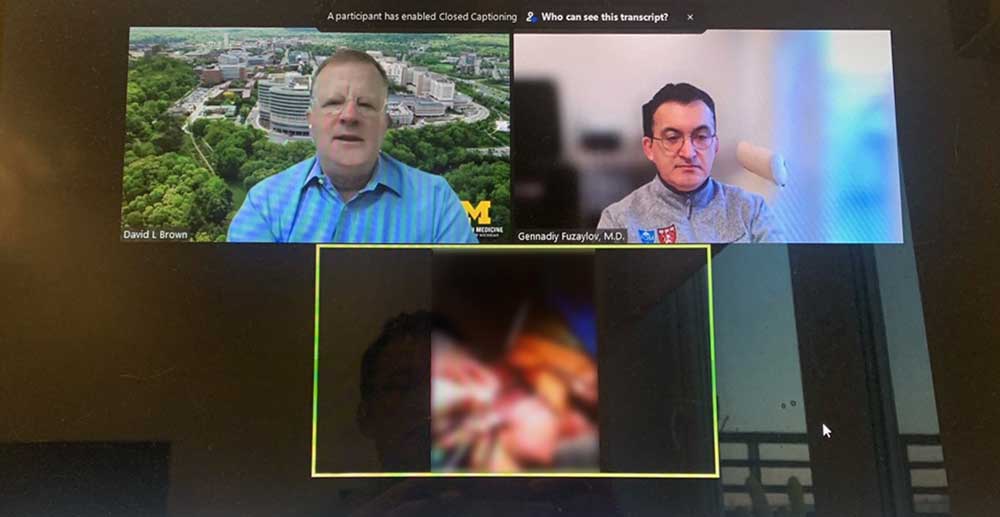 David Brown, M.D., top left, and Paul Cederna (not pictured) plastic surgeons at Michigan Medicine, and Gennadiy Fuzaylov, M.D., a pediatric anesthesiologist at Massachusetts General Hospital, consult via zoom on an RPNI surgery being doing at a hospital in Ukraine.

The stories and images of Ukrainian amputees in the New York Times were tough for plastic surgeons David Brown, M.D., and Paul Cederna, M.D., to take.

Brown had done medical missions to operate on young burn victims in the Ukraine before the war with Russia, and he had an affinity for the people. When the war disrupted the missions, he worked with others to help arrange for shipments of medical supplies.

Cederna, Chief of the Section of Plastic Surgery, knew that the traumatic injuries meant a tough rehabilitation road and possible phantom limb pain following amputations. When a medical student wondered whether regenerative peripheral nerve interface (RPNIs) were being done for the patients, Cederna saw a way to help—with education.

“We thought this would be a great opportunity to ensure that these men and women losing limbs protecting their country can get the best outcome possible,” Cederna said.

A novel procedure and established connections

Members of the plastic surgery team have found RPNIs effective at blunting the pain caused by neuromas, hyper-sensitive masses that can form at the base of severed nerves after amputation. RPNIs involve burying the severed nerves into free muscle grafts, giving the nerves targets to stop the formation of painful neuromas and help with patients’ ability to tolerate prostheses.

While the procedure has gained traction at Michigan Medicine, it’s still somewhat novel and less known elsewhere—especially where surgeons might not speak or read English, as in Ukraine.

“We spend a lot of time writing a lot of papers and giving a lot of talks at meetings, but it isn't accessible to them. So we decided to reach out and see if this was something they would be interested in,” Cederna said.

For that outreach, Brown tapped an old partner, Gennadiy Fuzaylov, M.D., a pediatric anesthesiologist at Massachusetts General Hospital. Fuzaylov, through his organization, Doctors Collaborating to Help Children, had spearheaded the pediatric burn surgery missions in the Ukraine that Brown had participated in. He had key connections within the State Department locally and with healthcare administrators and hospitals in Ukraine.

He also spoke the language.

Fuzaylov approached delicately, starting by querying physicians at regional hospitals about how they treated amputees.

“I asked them how they deal with amputation and they said, ‘We just cut them.’ And then what? ‘And then we don’t see them,’” Fuzaylov said.

It was clear that their patients would potentially develop phantom limb pain and be good candidates for RPNIs, and Fuzaylov extended the offer to do remote lectures with Brown and Cederna to share the technique. 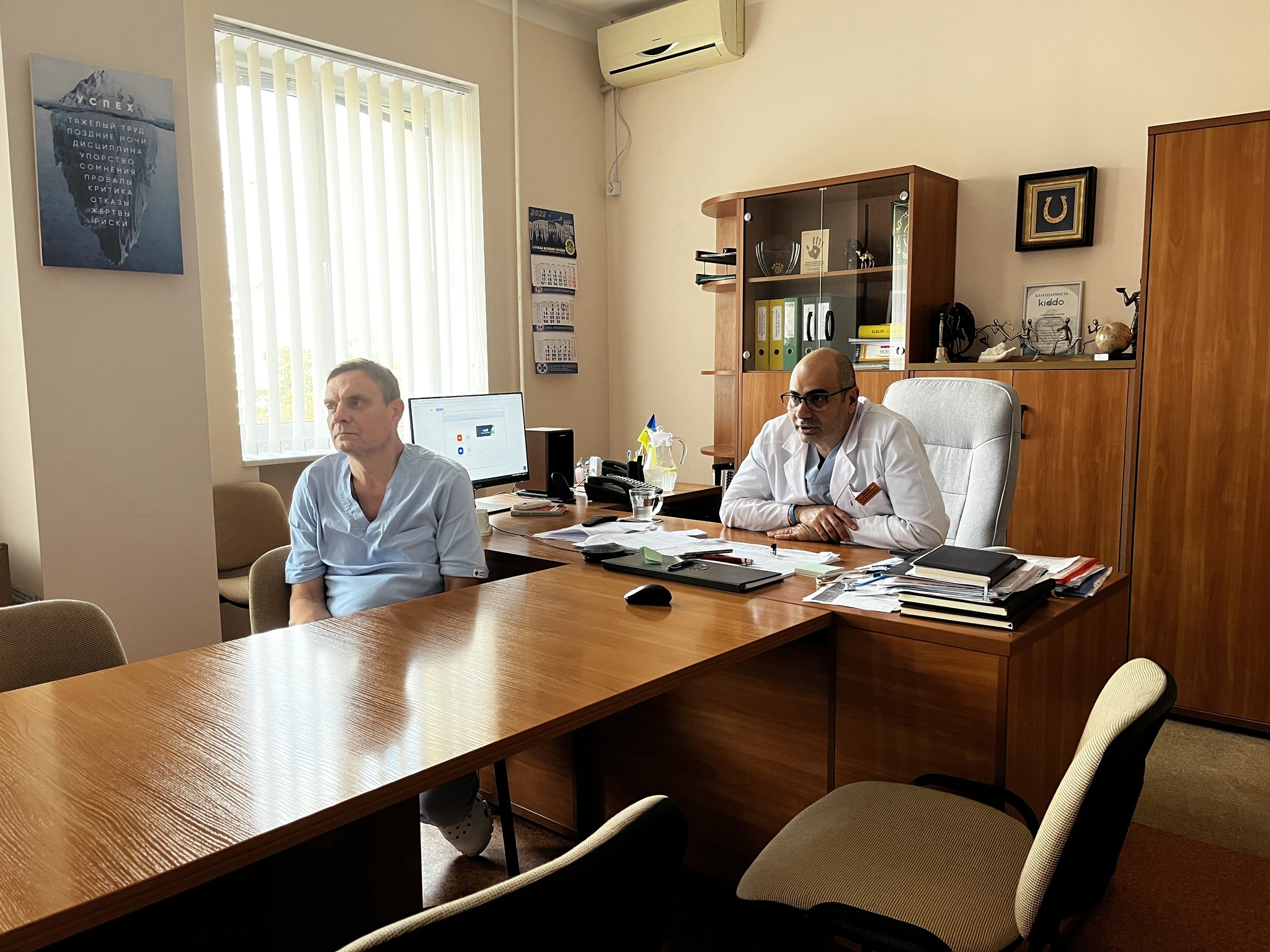 Three hospitals—located in Dnipro, Kiev and Vinnytsya—were engaged, and the first lectures took place in November 2022. The strong attendance from physicians already stretched to provide care in extreme circumstances was encouraging to Brown.

“Even before this war, we’ve seen a desire from them to accept help when they can but not be dependent on outside people…There were 25 or 30 people from one hospital on the first call, when I thought there’d be six,” Brown said.

That the lecture describing the procedure was easy even for a non-surgeon like Fuzaylov to grasp made the outreach easier.

“When I heard the lecture I thought I could do it myself guided by YouTube. It was so simple in terms of presentation,” Fuzaylov said.

Some things are not so simple. Being in a war zone means power is spotty, and being inundated with patients while lacking supplies and staff means time is precious.

“The hospital we started with in Nipro was recently attacked again. They don't have electricity except for generators, so their time is limited to just a couple of rooms a couple of days a week,” Brown said.

Brown added that the RPNI procedure—which is best done at the time of amputation to reduce the number of operations— would add about an hour to operating time when the surgeons initially started doing them.

Military hospitals have even more chaos and patients to field, which is why Fuzaylov said he didn’t tap them for lectures. 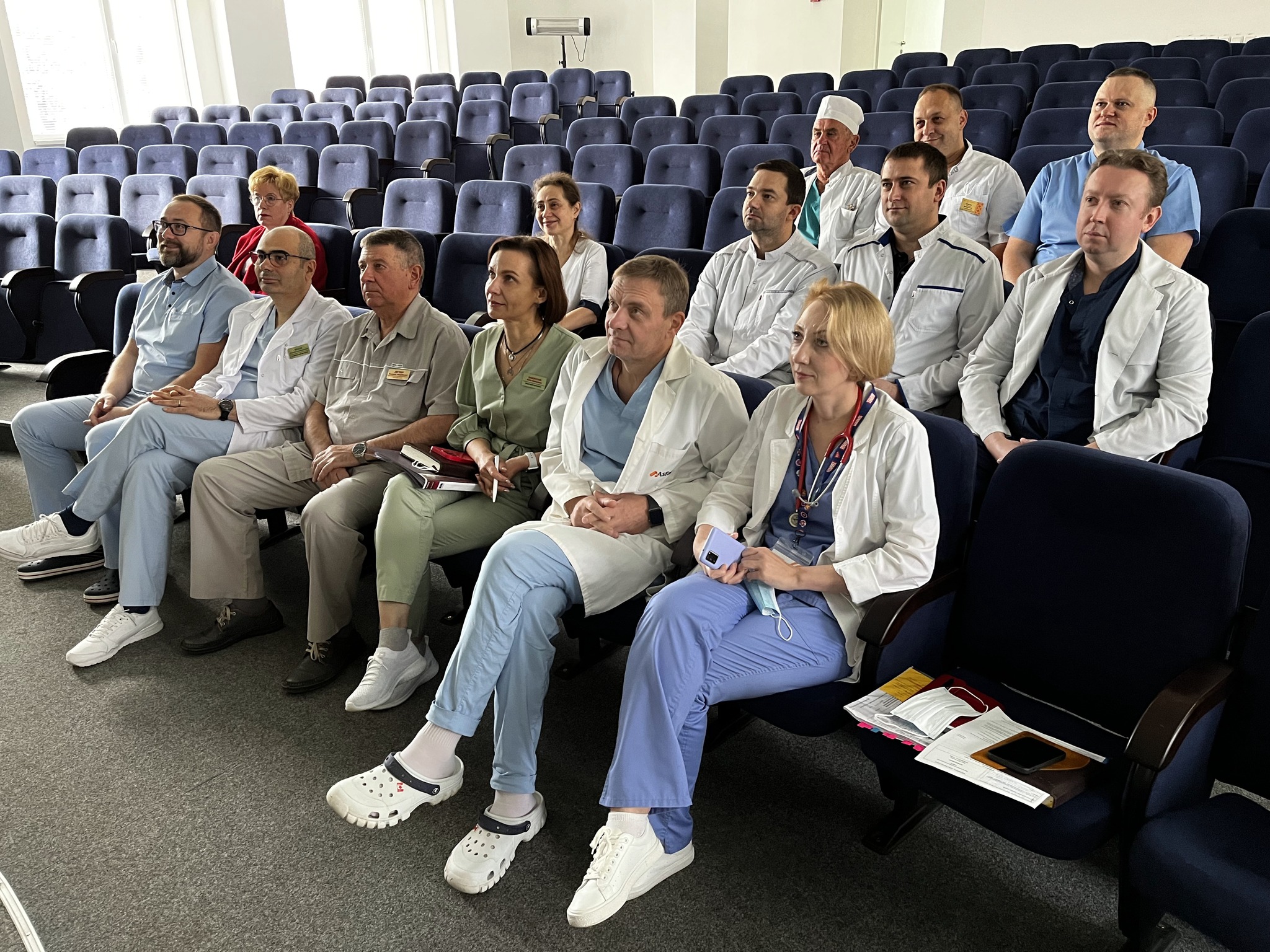 Even with all of the challenges they face with resources and time, the Ukrainian surgeons were receptive to trying the RPNI procedure.

A handful of lectures over Zoom crystallized the knowledge of the procedure for the Ukrainian surgeons and Brown, Cederna and Fuzaylov worked with them on a plan to consult remotely on live surgeries.

As of January, 3 patients had received RPNIs at the hospitals in Kyiv and Dnipro, with the American trio consulting via Zoom throughout the process.

“They are unbelievably resilient, and despite everything going on, they are still somehow maintaining enough infrastructure to stay connected,” Cederna said.

The American team hopes to continue to expand the knowledge of PRNIs in person with a trip to Poland, with a safe buffer from the warzone, in the future. In the meantime, education will be shared one virtual lecture at a time. 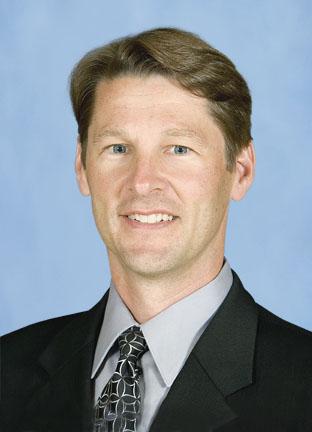 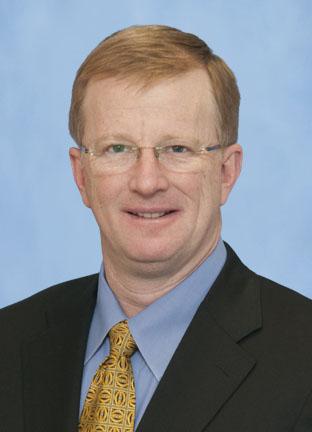